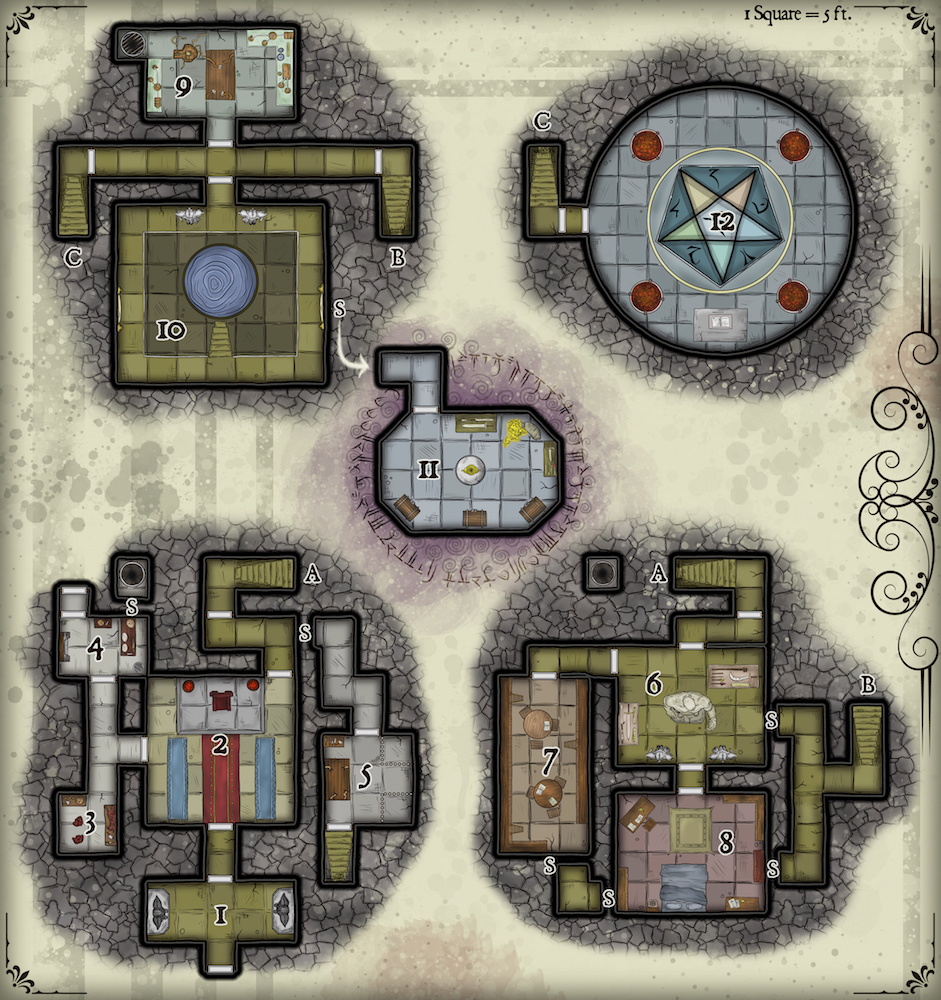 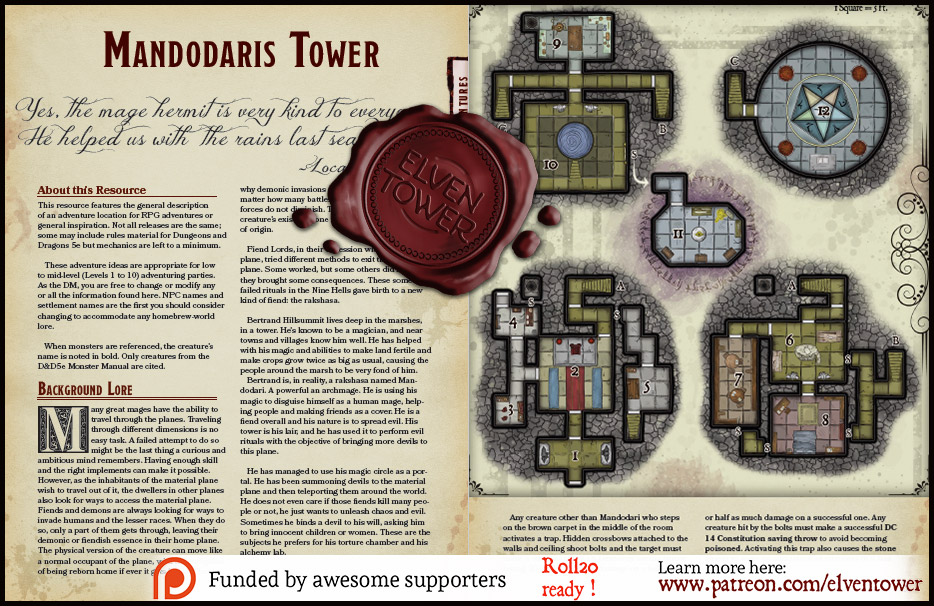 Many great mages have the ability to travel through the planes. Traveling through different dimensions is no easy task. A failed attempt to do so might be the last thing a curious and ambitious mind remembers. Having enough skill and the right implements can make it possible. However, as the inhabitants of the material plane wish to travel out of it, the dwellers in other planes also look for ways to access the material plane.

Fiends and demons are always looking for ways to invade humans and the lesser races. When they do so, only a part of them gets through, leaving their demonic or fiendish essence in their home plane. The physical version of the creature can move like a normal occupant of the plane, with the exception of being reborn home if ever it gets killed. That is why demonic invasions are so dangerous, for no matter how many battles are won, the enemies’ forces do not diminish. To erase an evil extraplanar creature’s existence one must end its life in its plane of origin.

Fiend Lords, in their obsession with the material plane, tried different methods to exit their home plane. Some worked, but some others did not, and they brought some consequences. These somewhat failed rituals in the Nine Hells gave birth to a new kind of fiend: the rakshasa.

Bertrand Hillsummit lives deep in the marshes, in a tower. He’s known to be a magician, and near towns and villages know him well. He has helped with his magic and abilities to make land fertile and make crops grow twice as big as usual, causing the people around the marsh to be very fond of him.

Bertrand is, in reality, a rakshasa named Mandodari. A powerful an archmage. He is using his magic to disguise himself as a human mage, helping people and making friends as a cover. He is a fiend overall and his nature is to spread evil. His tower is his lair, and he has used it to perform evil rituals with the objective of bringing more devils to this plane.

He has managed to use his magic circle as a portal. He has been summoning devils to the material plane and then teleporting them around the world. He does not even care if those fiends kill many people or not, he just wants to unleash chaos and evil. Sometimes he binds a devil to his will, asking him to bring innocent children or women. These are the subjects he prefers for his torture chamber and his alchemy lab.

Two big statues flank the small lobby. The statues are rakshasas. The statue on the left depicts an Ak’chazar, the one on the right is a Naztharune. Both are subraces of rakshasas. They are magic statues answering to Mandodari’s command. Whenever he says the word, both statues change their shape, becoming human. They do not fight or move away from their place. He does this to deceive visitors of his real identity.

A successful DC 20 Wisdom (Perception) check allows a character to notice the statues are not what they seem. The lobby is completed by a small hallway that leads to Area 2, divided by doors on each side of it.

This is the hall where Bertrand receives visitors. Rakshasas enjoy wealth, and they usually opt for luxurious living. There is a throne, as in a royal castle, with two blue carpets flanking a royal carpet in the center. Two braziers stand on each side of the throne, bringing a warm atmosphere in the room. The hallway behind the throne room features a secret door to the east. This door leads to the secret part of the tower (Area 5), which has its own set of stairs.

Although fiends do not need food to survive, Mandodari has a kitchen. It helps whenever he has guests. And a fiend won’t say no to human flesh, as they eat for a hobby.

Mandodari plays the piano. He often spends hours practicing. Fiends are charismatic and intelligent. It is no surprise that rakshasas, being among the most respected, powerful, and better-ranked fiends, have a weakness for music, art, and sophisticated hobbies. There is a secret door at the end of the room hidden behind a table, it gives way to the black pit that is used as a landfill.

Accessed by the secret door on the hallway behind Area 2, the two cells in this room are completed by a large wooden torture table. Four leather straps stained with blood give the table a dark appearance. There is a second smaller table on the side of the room with torture implements. The stairs go down to a small storage area with crates and covered furniture (not pictured).

Two similar statues to the ones in Area 1 are here, they guard the entrance to Area 8. There is one larger humanoid statue in the middle of the room. This is a stone golem, created by Mandodari himself. He holds the control stone for the golem with him at all times. The golem attacks anyone not accompanied by Mandodari himself.

This room is barely used by Mandodari. There are only a pair of round tables with a set of three chairs each. The real use for this room is the secret entrance which leads to Area 8. It can be used in case of emergencies, or to ambush unwanted visitors.

A large bed fills the center of the room. A desk and a wooden table are across from one another, to the left and right of the bed. There are two secret doors to each side, one going to Area 7, and the other is the secret access to the third level.

Any creature other than Mandodari who steps on the brown carpet in the middle of the room activates a trap. Hidden crossbows attached to the walls and ceiling shoot bolts and the target must make a successful DC 18 Dexterity saving throw, taking 20 (4d10) piercing damage on a failed save, or half as much damage on a successful one. Any creature hit by the bolts must make a successful DC 14 Constitution saving throw to avoid becoming poisoned. Activating this trap also causes the stone golem to wake up and attack all intruders (if it has not been alerted yet).

This torture chamber is complemented by an alchemy lab. Mandodari performs foul experiments with animals and prisoners. He ties his victims to the table and applies different doses of venoms and poisonous substances to analyze results. He sometimes does this just for fun. This floor has access to the black pit, which goes all the way down to the first floor. He disposes of all his garbage here. He throws bodies and tortured carcasses in here to rot.

As all rakshasas, Mandodari likes to pamper himself. He infused the foundations of the pool with heating magic and created a spa. He spends a couple of hours here each day to replenish his energies and relax. Two floor-to-ceiling mirrors decorate the spa. The one by the east wall is an illusion. A successful DC 20 Wisdom (Perception) check reveals the illusion and the hallway behind the mirror. This hallway leads to Area 11.

The archmage keeps magic items, gold, valuable art, and gems. He has stored around 20,000 gp in gold and precious items. All this can be found in the chests and the money bag on the floor. He also keeps here a couple of magic swords. (DM’s choice)

Fourth Floor (Top of the Tower)

The center of the room has a pentagram with arcane runes on it. Dark blood decorates the circle in the form of fiendish evil runes. Four braziers, one to each side of the pentagram, fill the circle’s edge. A dais is placed in front of the star’s south end, it holds a necromantic book which holds Mandodari’s evil rituals. Mandodari has been improving his rituals, and the sacrifices he does please the Fiend Lords. He is trying to find a way to open an everlasting portal to allow powerful fiends to trespass and Fiend Lords to plant their seed among mortals.

Terrain. Although the tower is old and the stone shows cracks in its walls, the structure is strong and very clean. The first floor of the tower is warm, thanks to the burning braziers. The second floor is colder; the third floor even more. Entering the third floor causes an uneasy feeling due to all the cruel and inhumane experiments that have been held here. The top of the tower is the coldest place of all. The atmosphere is heavy, and evil is palpable.

Secret Doors. A successful DC 20 Wisdom (Perception) check reveals any secret doors. Checks must be rolled individually every time a player desires to look for secret entrances or traps. the check result is limited to the room or area the player is in.