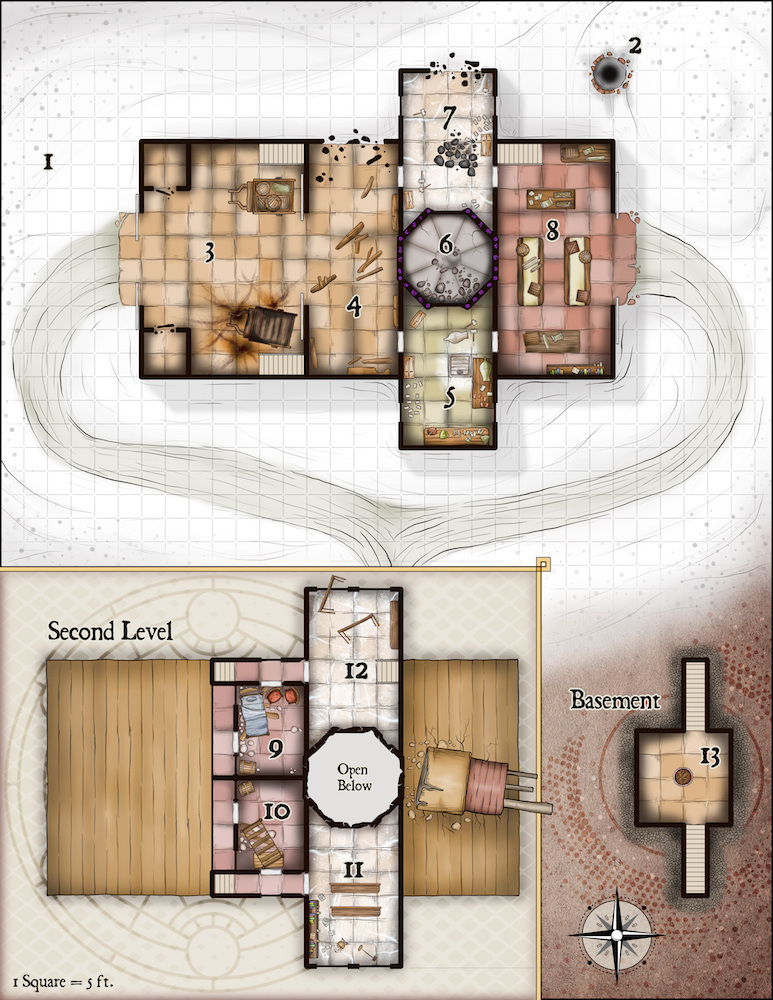 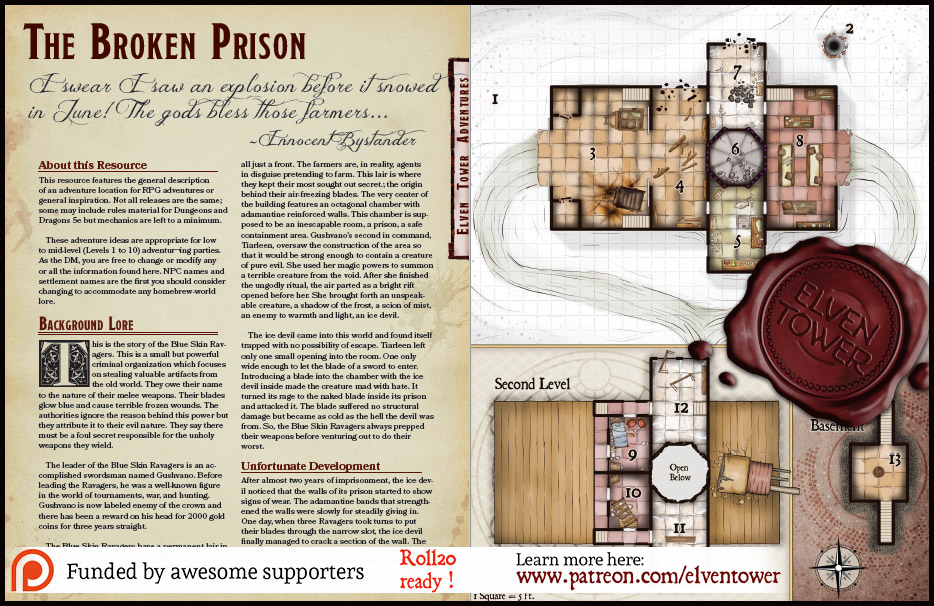 This is the story of the Blue Skin Ravagers. This is a small but powerful criminal organization which focuses on stealing valuable artifacts from the old world. They owe their name to the nature of their melee weapons. Their blades glow blue and cause terrible frozen wounds. The authorities ignore the reason behind this power but they attribute it to their evil nature. They say there must be a foul secret responsible for the unholy weapons they wield.

The leader of the Blue Skin Ravagers is an accomplished swordsman named Gushvano. Before leading the Ravagers, he was a well-known figure in the world of tournaments, war, and hunting. Gushvano is now labeled enemy of the crown and there has been a reward on his head for 2000 gold coins for three years straight.

The Blue Skin Ravagers have a permanent lair in a large building outside of town. The area around the building appears to be a potato farm but it is all just a front. The farmers are, in reality, agents in disguise pretending to farm. This lair is where they kept their most sought out secret.; the origin behind their air-freezing blades. The very center of the building features an octagonal chamber with adamantine reinforced walls. This chamber is supposed to be an inescapable room, a prison, a safe containment area. Gushvano’s second in command, Tiarleen, oversaw the construction of the area so that it would be strong enough to contain a creature of pure evil. She used her magic powers to summon a terrible creature from the void. After she finished the ungodly ritual, the air parted as a bright rift opened before her. She brought forth an unspeakable creature, a shadow of the frost, a scion of mist, an enemy to warmth and light, an ice devil.

The ice devil came into this world and found itself trapped with no possibility of escape. Tiarleen left only one small opening into the room. One only wide enough to let the blade of a sword to enter. Introducing a blade into the chamber with the ice devil inside made the creature mad with hate. It turned its rage to the naked blade inside its prison and attacked it. The blade suffered no structural damage but became as cold as the hell the devil was from. So, the Blue Skin Ravagers always prepped their weapons before venturing out to do their worst.

After almost two years of imprisonment, the ice devil noticed that the walls of its prison started to show signs of wear. The adamantine bands that strengthened the walls were slowly for steadily giving in. One day, when three Ravagers took turns to put their blades through the narrow slot, the ice devil finally managed to crack a section of the wall. The opening was large enough for it to pass through. The devil squeezed out of the chamber unbelieving and dumbfounded. It had finally escaped the abhorrent prison Tiarleen had put him in. After a few seconds of disbelief, the ice devil was overcome with feelings of hate, destruction, and vengeance.

The Ravagers panicked and fled the scene as soon as they saw the crack widening before their eyes. Unfortunately, Tiarleen was nowhere to be found. Perhaps she might have been able to stop the devil from exiting the chamber if she had been there to see it. The devil attacked everyone on sight with a rage which could only come from a world different than ours. After a few unsuccessful attempts to push the creature back to the center of the complex, the Ravagers understood that there was no way they could face it. Many fled the building to find a hiding place in the cityscape nearby. Tiarleen, Gushvano, and two other gang members fled down into the basement and locked themselves down there.

Player characters are tasked by a figure of authority to find and arrest a group of criminals known colloquially as the Blue Skin Ravagers. They learn of their frozen blades and maybe some Intel about the location of their headquarters. However, when the party members find about the lair and choose to intervene, they find the place in disarray. A zone of disaster. No eye witness can say what happened inside the building. It has only been two days since the ice devil escaped. The terrible creature is still in the building, trying to find a way to access the basement where Tiarleen is. The PCs find themselves in a strange situation in which they need to choose whether to help the bad guys or not.

Despite the season (not winter), the area immediately around the lair is covered in snow and ice. An aura of cold air comes from the building itself.

From outside the Blue Skin Ravagers’ lair, it is obvious that something went terribly wrong. Circling the building, one can see that several sections of the wall in the first level were destroyed. Two of them appear to have been blown out from the inside. A cylindrical structure in the second level split in half, it appears to be some kind of chimney which currently lays broken on top of the eastern part of the building. A wolf howls in the distance, the location appears to draw danger to itself.

What appears to be a crude hole on the ground is revealed as what is left of a well. Careful inspection reveals that it was torn to pieces recently. The way it was destroyed suggests that someone climbed down and tried to dig sideways at the bottom. It leads nowhere. The water at the bottom is frozen solid.

The western entrance to the building leads to an unloading area. The destroyed and frozen remains of two doors lead to horse stalls next to the entrance. There is no sign of horses. There are two wagons, the northern one is in good state but covered in a layer of frost. Barrels and crates with diverse contents are in the back. The other wagon is all but destroyed, it appears burnt to a crisp. Strange burnt patterns on the floor and two carbonized corpses make the sight more mysterious. Careful inspection reveals that the burn marks were caused by some kind of packed explosive device. Some members of the Blue Skin Ravagers tried to use explosives in the wagon to kill the ice devil unsuccessfully. Both of them lost their lives to their own explosives.

The ice devil destroyed everything in its path here. The north wall is shattered and open to the elements. There is nothing of value here.

The ice devil, driven by hate and anger, is not thinking clearly and has managed to ignore this room so far. The north wall features a slot on the wall where the Blue Skin Ravagers put their blades inside the chamber. Enormous cracks on the wall suggest it almost caved in. The room contains a varied assortment of bladed weapons, armor, and blacksmith materials. A trapdoor on the floor is frozen shut. It leads down to Area 13.

The ice devil’s prison cracked on the north side. The ice devil then escaped to Area 7. From inside, eight adamantine bars on the walls reinforce it. Four of them are bent and deformed from their original function. Additionally, there are strange rune patterns all around the room. A careful arcane inspection reveals that this location is intended to contain a creature of demonic nature against its will. The area remains imbued with magic and may summon 1d6 ice mephits at random.

This is the first place the ice devil accessed and it has now become its lair. The ice devil detects its summoner by the nature of the spell. It knows that Tiarleen is somewhere below the building but has failed to notice the trapdoor in the middle of the room. The devil attacks any creature it sees as soon as it becomes aware of their presence.

This room is largely intact. The ice devil passed through it once but did not trash it. Despite the apparent calm in the room, there is an ice mephit hiding underneath each table. If a person comes snooping around and searches the room, the mephits attack.

The leader’s quarters are now the hiding place of a single Ravager who managed to slip inside before the ice devil went upstairs. The man is hungry and thirsty but has not dared go out from fear of the devil which is very loud in Area 7.

Two Ravagers shut themselves in Tiarleen’s quarters when they came looking for a necklace of fireballs she had in a chest. If an adventurer comes and opens the door suddenly, the Ravager might throw a fireball bead at them in self-defense.

The ice devil came across this room and found a shrine to a god unknown to it. The devil destroyed the place and froze most of it. The documents and scrolls in the frozen bookcase hint to the nature of Tiarleen’s magic abilities. Careful study reveals the presence of rituals to summon and bind devils. A person versed in magic might notice that there was a terrible mistake or omission in the construction of Area 6. The adamantine bars should have been made of obsidian, which was unavailable to Tiarleen due to its rarity. This is what permitted the devil to escape.

The frozen remains of two tables and a few smaller things are frozen solid in this room. There is nothing of value here.

Gushvano and Tiarleen plot their escape carefully. She knows that the devil knows her location at all times. Their current plan is to wait for the city watch to arrive and create a ruckus when they come across the devil. They plan to take advantage of the confusion and flee south.