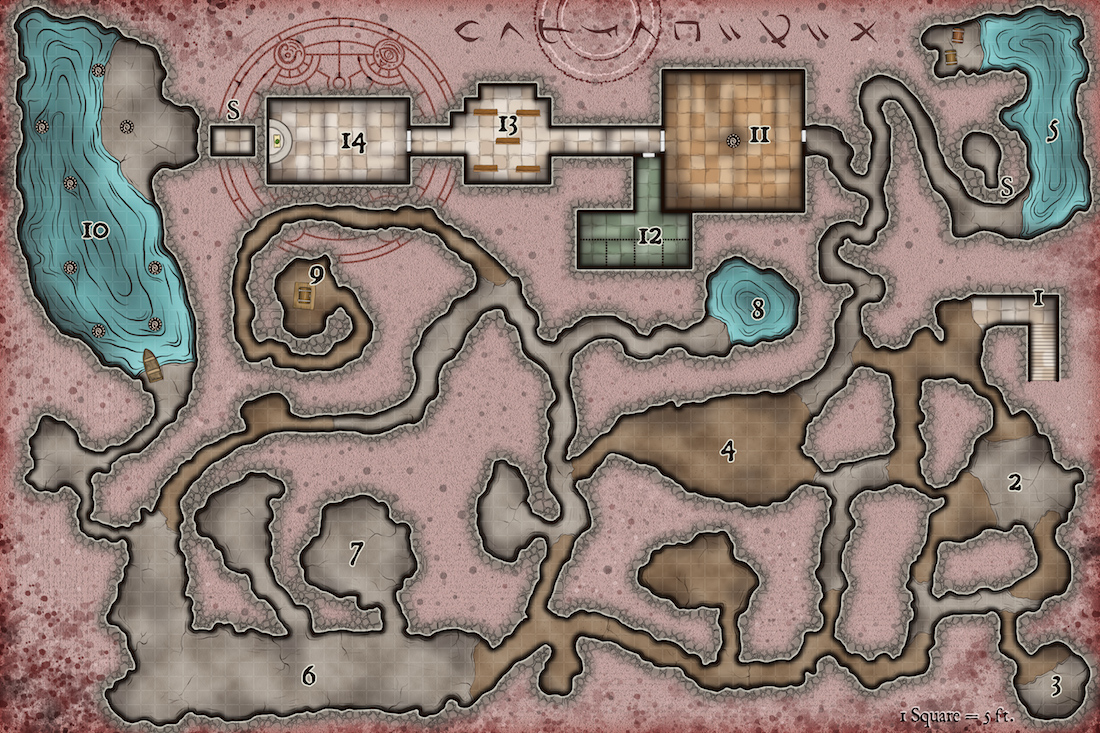 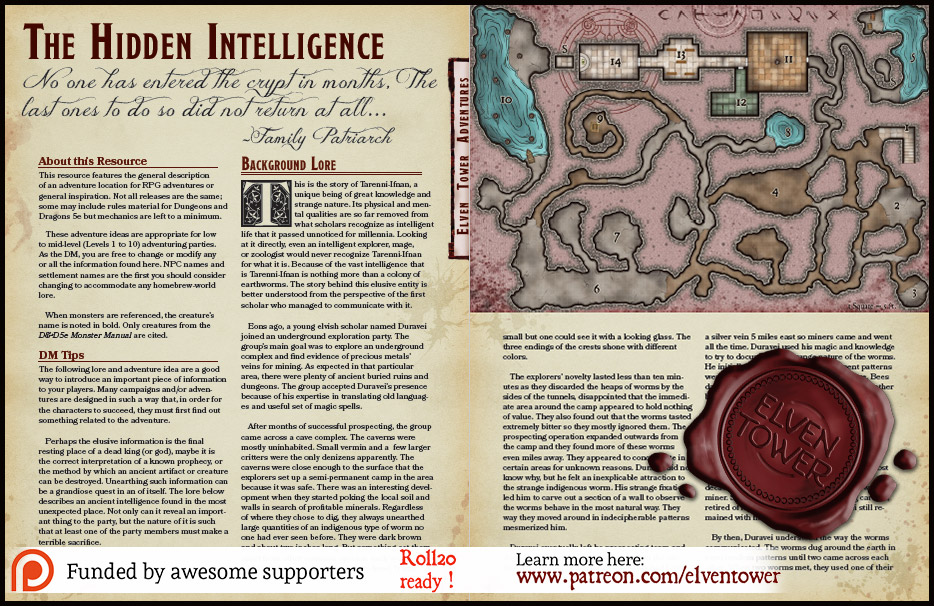 AND OUR PATREON FUNDING PAGE

The following lore and adventure idea are a good way to introduce an important piece of information to your players. Many campaigns and/or adventures are designed in such a way that, in order for the characters to succeed, they must first find out something related to the adventure.

Perhaps the elusive information is the final resting place of a dead king (or god), maybe it is the correct interpretation of a known prophecy, or the method by which an ancient artifact or creature can be destroyed. Unearthing such information can be a grandiose quest in an of itself. The lore below describes an ancient intelligence found in the most unexpected place. Not only can it reveal an important thing to the party, but the nature of it is such that at least one of the party members must make a terrible sacrifice.

This is the story of Tarenni-Ifnan, a unique being of great knowledge and strange nature. Its physical and mental qualities are so far removed from what scholars recognize as intelligent life that it passed unnoticed for millennia. Looking at it directly, even an intelligent explorer, mage, or zoologist would never recognize Tarenni-Ifnan for what it is. Because of the vast intelligence that is Tarenni-Ifnan is nothing more than a colony of earthworms. The story behind this elusive entity is better understood from the perspective of the first scholar who managed to communicate with it.

Eons ago, a young elvish scholar named Duravei joined an underground exploration party. The group’s main goal was to explore an underground complex and find evidence of precious metals’ veins for mining. As expected in that particular area, there were plenty of ancient buried ruins and dungeons. The group accepted Duravei’s presence because of his expertise in translating old languages and useful set of magic spells.

After months of successful prospecting, the group came across a cave complex. The caverns were mostly uninhabited. Small vermin and a few larger critters were the only denizens apparently. The caverns were close enough to the surface that the explorers set up a semi-permanent camp in the area because it was safe. There was an interesting development when they started poking the local soil and walls in search of profitable minerals. Regardless of where they chose to dig, they always unearthed large quantities of an indigenous type of worm no one had ever seen before. They were dark brown and about two-inches-long. But something set them apart from other common species, each worm had a kind of three-pronged crest on its head. It was small but one could see it with a looking glass. The three endings of the crests shone with different colors.

The explorers’ novelty lasted less than ten minutes as they discarded the heaps of worms by the sides of the tunnels, disappointed that the immediate area around the camp appeared to hold nothing of value. They also found out that the worms tasted extremely bitter so they mostly ignored them. The prospecting operation expanded outwards from the camp and they found more of these worms even miles away. They appeared to concentrate in certain areas for unknown reasons. Duravei did not know why, but he felt an inexplicable attraction to the strange indigenous worm. His strange fixation led him to carve out a section of a wall to observe the worms behave in the most natural way. They way they moved around in indecipherable patterns mesmerized him.

Duravei eventually left he prospecting team and stayed permanently in the camp close to the surface. He was not alone; the prospectors had found a silver vein 5 miles east so miners came and went all the time. Duravei used his magic and knowledge to try to document the strange nature of the worms. He initially theorized that their movement patterns were something similar to how bees behave. Bees dance around and secrete pheromones to tell other bees where to find flowers. Despite their near absent intelligence, the bees can deliver complex messages and instructions to others of their kind. Perhaps the worms did the same. But Duravei could not crack the code.

Years passed and Duravei became an oddity in camp. A strange elf scholar who had spent almost two decades studying the boring worms. Two decades was about the life expectancy of a working miner. Some of them started their mining careers, retired of injuries or old age, and Duravei still remained with his worms.

By then, Duravei understood the way the worms communicated. The worms dug around the earth in semi-random patterns until two came across each other. When two worms met, they used one of their crest-prongs to secrete a pheromone, the other worm could answer the message with the same prong or a different one. The worms were capable of secreting three different pheromones, one with each crest prong. After exchanging this chemical message, the worms would part ways and dig around until they came across another worm, and then the chemical exchange would repeat. This was the nature of the worms, and it was a slow process that repeated itself over and over again.

One day, Duravei theorized that if there were enough worms in a certain area, the slow process of chemical exchange of thousands of worms across a large enough period of time would be similar to the way the brain works. Neurons exchange fast electric messages with each other, the worms exchanged pheromones but thousands of times slower. Duravei’s work lasted decades after he made this discovery. He found out that his initial assertion was correct. In an open wall of dirt, with hundreds of worms visible at the same time, if Duravei talked to them or showed them images on papers or with magic, the worms reacted to him, but they did it in such a slow fashion that he needed years to see the results. I took Duravei three-hundred years to finally crack the mystery of the strange worms. He wrote a book that explained the movements of the worms and the meaning of the patterns.

With that, Duravei could finally speak directly with the worms. He discovered that while individual worms were not intelligent. The whole network was sentient but its perspective of time was slower than that of humanoids. In order to speak to it, Duravei had to stay in the same room, in front of the wall for one-hundred years. Only in that case could the worm creature see him for what he was. Otherwise, Duravei was nothing but a blurry figure moving at breath-taking speed (at least from the worms’ point of view). One hundred years was the equivalent of a ten-minute conversation in real time.

The worm sentience called itself Tarenni-Ifnan, it was unique as far as it knew, but its body spanned hundreds of miles away from the cave. Millions of individual worms were part of its enormous neural network. Tarenni-Ifnan was as old as time itself but it considered itself young: from its point of view, not much time had passed.

Duravei became a symbol for industriousness and perseverance. His work has endured to this day as a work of love and a way to access a supreme sentience which has access to a body of information larger than itself.

In time, the miners’ camp was disbanded and the place was home to a religion centered around the worm things. This religion came and went and after a few thousand years, it was gone too. The underground temple where once scores of followers worshipped the worm intelligence is still in good shape (Areas 11, 12, 13, and 14) very little remains of their scriptures and documents, but Duravai’s book is in the altar of Area 14. The book was enchanted to withstand time. There is a hidden passage behind the altar which leads to the place where legendary Duravai once communed with Tarenni-Ifnan for the first time (Area 10).

Duravai’s work and renown, and the tales of the great insectoid intelligence may bring a group of characters to find out a terrible secret. There are tales that say that the entity’s neural network is so vast that nothing escapes its prescience. But when the adventurers arrive at the location, they will not know of the nature of Tarenni-Ifnan, particularly how its perception of time is not the same as theirs. A conversation with Tarenni-Ifnan may well take them fifty years.

Eons after Duravai’s lifetime, the priests of that strange religion figured out a way to commune with Tarenni-Ifnan and circumvent that requirement. Not entirely of course. They created a magical artifact, Terenni’s Scepter. When the scepter is activated, it creates a bubble of closed time around the wielder and projects him one-hundred years into the past. The person cannot leave the bubble, nor does it move. During the next one hundred years, the person can communicate with Tarenni-Ifnan with the help of Duravai’s book. This period is equivalent to ten minutes of conversation. The bubble bursts when the hundred years end. The person is in the same place and moment it was before using the scepter but one hundred years older.

From another person’s perspective. When the wielder uses the scepter, a bright blue bubble encloses him for a few seconds before bursting. After it dissolves, the person inside the bubble is there, but they appear to be older than before. This person has experienced one-hundred years of subjective time.

If the subject’s lifetime is less than 100 years, the person is dead after the bubble bursts. This is the case for humans and other humanoid races. Even in that case, the contents of that creature’s conversation with Tarenni-Ifnan during the allowed time may be recorded in writing. The process of conversing with Tarenni-Ifnan is only feasible for elves, dwarves, or other long-lived races.