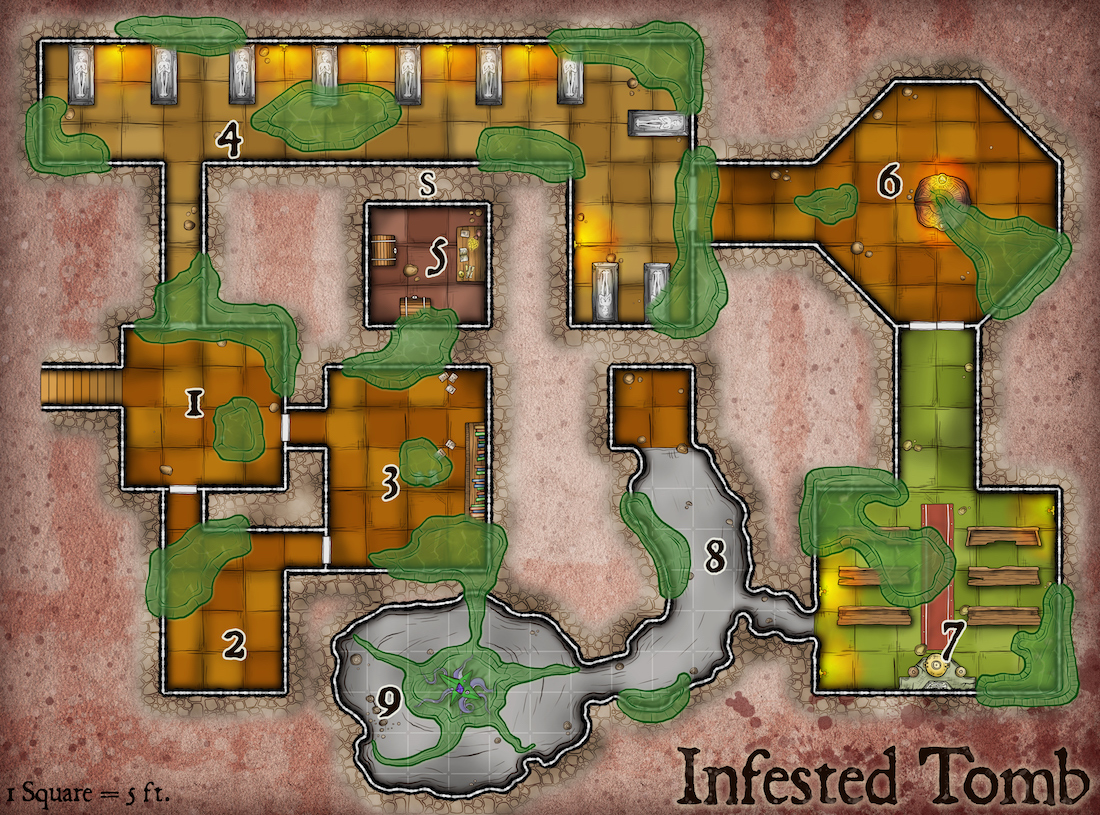 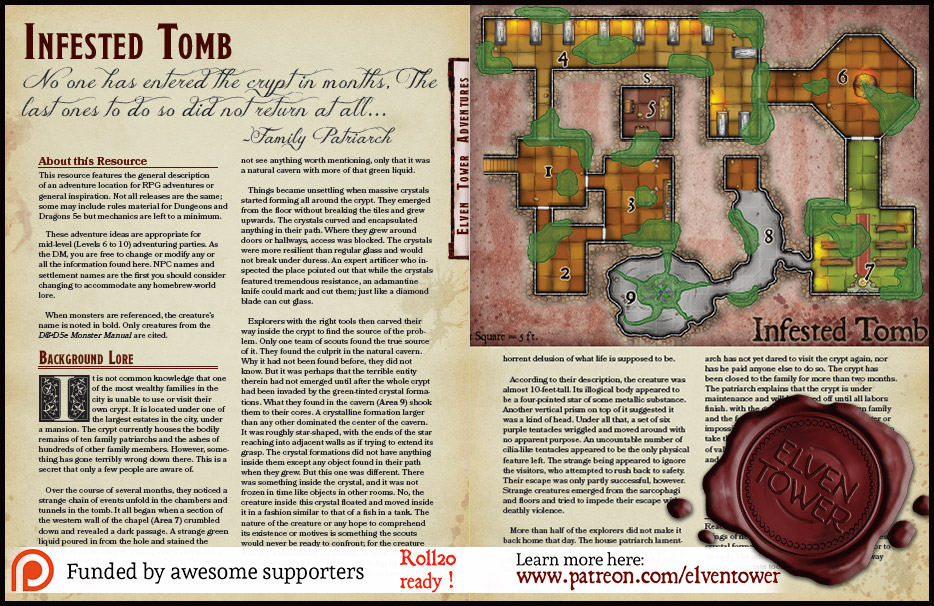 These adventure ideas are appropriate for mid-level (Levels 6 to 10) adventur­ing parties. As the DM, you are free to change or modify any or all the information found here. NPC names and settlement names are the first you should consider changing to accommodate any homebrew-world lore.

It is not common knowledge that one of the most wealthy families in the city is unable to use or visit their own crypt. It is located under one of the largest estates in the city, under a mansion. The crypt currently houses the bodily remains of ten family patriarchs and the ashes of hundreds of other family members. However, something has gone terribly wrong down there. This is a secret that only a few people are aware of.

Over the course of several months, they noticed a strange chain of events unfold in the chambers and tunnels in the tomb. It all began when a section of the western wall of the chapel (Area 7) crumbled down and revealed a dark passage. A strange green liquid poured in from the hole and stained the stone tiles of the chapel. Time passed and nothing else happened. Explorers returned from the now tunnel and reported it did not go very far. They did not see anything worth mentioning, only that it was a natural cavern with more of that green liquid.

Things became unsettling when massive crystals started forming all around the crypt. They emerged from the floor without breaking the tiles and grew upwards. The crystals curved and encapsulated anything in their path. Where they grew around doors or hallways, access was blocked. The crystals were more resilient than regular glass and would not break under duress. An expert artificer who inspected the place pointed out that while the crystals featured tremendous resistance, an adamantine knife could mark and cut them; just like a diamond blade can cut glass.

Explorers with the right tools then carved their way inside the crypt to find the source of the problem. Only one team of scouts found the true source of it. They found the culprit in the natural cavern. Why it had not been found before, they did not know. But it was perhaps that the terrible entity therein had not emerged until after the whole crypt had been invaded by the green-tinted crystal formations. What they found in the cavern (Area 9) shook them to their cores. A crystalline formation larger than any other dominated the center of the cavern. It was roughly star-shaped, with the ends of the star reaching into adjacent walls as if trying to extend its grasp. The crystal formations did not have anything inside them except any object found in their path when they grew. But this one was different. There was something inside the crystal, and it was not frozen in time like objects in other rooms. No, the creature inside this crystal floated and moved inside it in a fashion similar to that of a fish in a tank. The nature of the creature or any hope to comprehend its existence or motives is something the scouts would never be ready to confront; for the creature was not a humanoid, an animal, or even anything anyone would ever recognize as a living being. It was an abject deformity, an insult to nature, an abhorrent delusion of what life is supposed to be.

According to their description, the creature was almost 10-feet-tall. Its illogical body appeared to be a four-pointed star of some metallic substance. Another vertical prism on top of it suggested it was a kind of head. Under all that, a set of six purple tentacles wriggled and moved around with no apparent purpose. An uncountable number of cilia-like tentacles appeared to be the only physical feature left. The strange being appeared to ignore the visitors, who attempted to rush back to safety. Their escape was only partly successful, however. Strange creatures emerged from the sarcophagi and floors and tried to impede their escape with deathly violence.

More than half of the explorers did not make it back home that day. The house patriarch lamented the unnecessary loss of lives and appropriately offered compensation to the families of the fallen. Two months have passed since then and the patriarch has not yet dared to visit the crypt again, nor has he paid anyone else to do so. The crypt has been closed to the family for more than two months. The patriarch explains that the crypt is under maintenance and will be closed off until all labors finish. with the growing pressure of his own family and the fear that the problem might grow larger or impossible to contain, the patriarch is now ready to take the risk and reopen the crypt to send a group of valiant warriors to find the origin of the problem and destroy it.

Reaching the first chamber in the crypt the only things of notice are the large crystals. One of these crystal formations completely encloses the door to Area 4. The adventurers need to carve their way with appropriate tools or weapons.

The walls of this room contain hundreds of drawer-like niches. About half of the niches are occupied with the ashes of some family members. All occupied niches are properly labeled. The northern entrance to this chamber is blocked by a crystal formation but the way from Area 3 is open. When adventurers enter this room, the unresting spirits of the family arise and attack. These spirits emerge from the niches in the form of 1d8 shadows.

A meager library. Only one bookcase by the east wall. The adventurers may be aware that this library is nothing but an extension of the grand library in the mansion above. These are the volumes that did not fit there anymore. Part of the bookcase and some book volumes on the floor are trapped inside a crystal formation. If the adventurers have a secondary objective about finding a particular bit of information about the wealthy family, this is a good place for it.

The large crypt features ten sarcophagi, all of them closed. When the adventurers reach the middle of the room, two wraiths and two shadows come from under the sarcophagi and attack the party. These creatures feature a unique green coloration instead of black.

A passive Perception score of 16 or higher reveals the presence of a secret tunnel through the south wall. It connects to Area 5.

The secret room has two wooden chests and one table. There are 3 potions of healing, 400 gp, and one +1 shortsword.

A large sacrificial stone dominates the center of the room. There are old blood stains on the rock. Despite its presence, no one in the family partakes in such evil rituals, the stone is an oddity bought by a patriarch two generations ago.

Large parts of the chapel are now encased in green crystal. Several creatures sit on the benches as if attending to a silent mass. These humanoid creatures are made of fractal crystals. They get up and attack anyone who disturbs their meditation. Use the stat blocks for blight creatures but describe their presence accordingly. (2 vine blights and 4 twig blights)

The pulsating sound from Area 9 is strong enough here to be felt as a vibration in the body. It sounds like a beating heart.

The entity from the void reached this world by mistake and is now trapped. Its energy filters through the stone and manifests as crystals. It is not inherently evil but nor is it benevolent. It does not wish harm or well to anything in this place. It only cares about continuing its never-ending trek through the universes. The adventurers cannot kill it, nor can they damage it in any way. It exists in this world yet it does not. The physical form the adventurers see is nothing but a partial representation of its true form in higher dimensions. The thing can communicate its purpose mentally and the adventurers can respond likewise.

The entity from the void needs nothing more than energy to continue its journey. It requests the party members to gift it a tiny portion of their life force so that it can once more leave to unknown planes. If the adventurers agree, they feel a portion of energy leave their bodies. Should any of them live to old age, they will die of natural causes five years earlier than they normally would have. Four people are needed to gift the entity enough energy to leave. Once the life force gift is given, the creature fades from existence and nothing of it remains. The crystal formations stay and must be removed manually.

These are the general features of the infested tomb. Its location is left vague but it is implied that the location is urban.

Terrain. Most areas in the tomb feature stone-tiled floor. Areas 8 and 9 are natural cavern tunnels. Floor tiles with furniture or any large object are considered difficult terrain for the purposes of tactical movement.

Crystalline Formations. The infestation manifests with the growth of green crystal formations that encapsulate anything they grow around. These formations go from floor to ceiling and block passage if their mass cover a hallway. The formations are harder and more resilient than standard glass but can be broken with adamantine or magic weapons and tools.

Doors. The doors are standard wooden doors with simple locks. All doors are unlocked but some of them are inside crystalline formations which must be broken or destroyed in order to advance.

Light. There magical torch sconces in Areas 4, 6, and 7. These areas are brightly lit. The rest of the dungeon is in complete darkness.

Smells and Sounds. A red-tinted mist moves close to the floor and smells like hot peppers. The air is dense and dry enough that it scalds the nose. The crystalline formations smell like ozone, a smell that can only be detected standing next to the crystals. A muted palpitating sound is always present. It is the otherworldly entity in Area 9, this sound gets louder as the adventurers get closer to it.