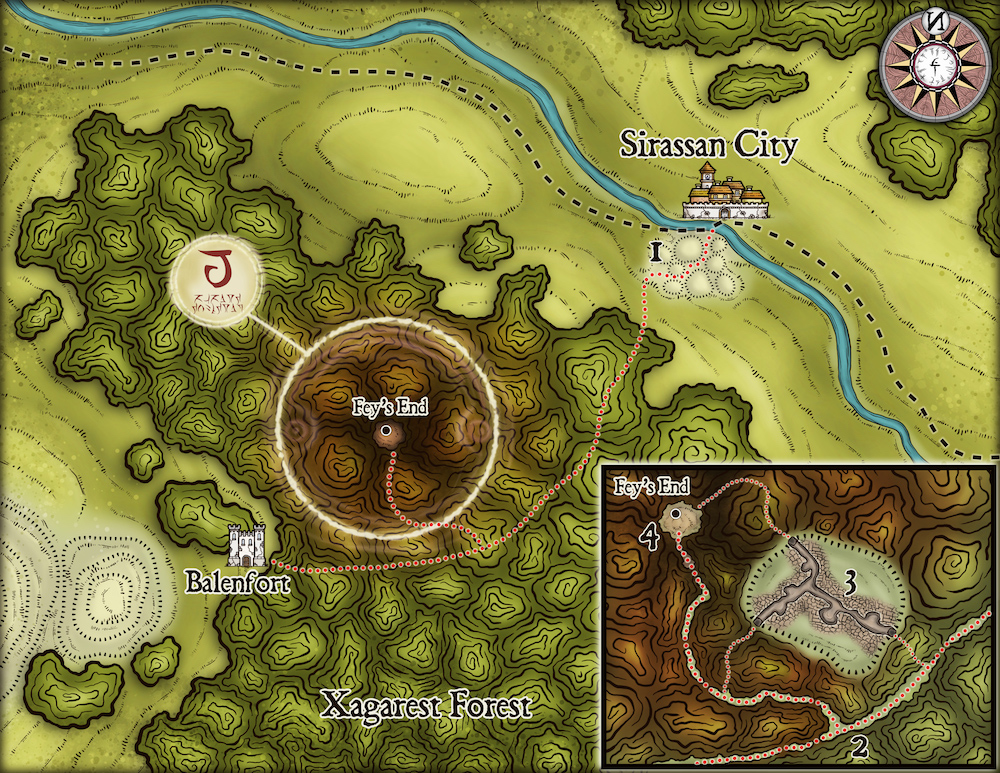 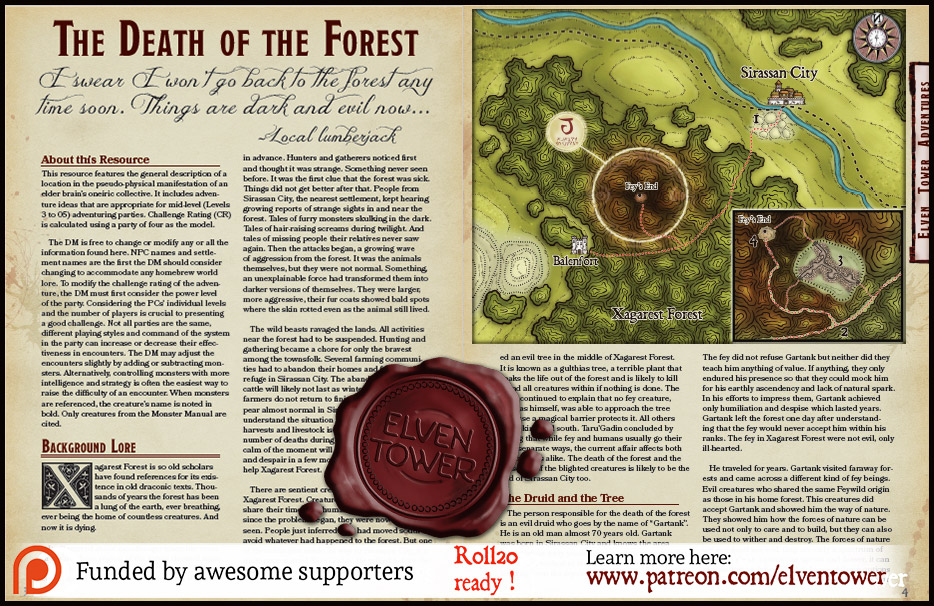 This resource features the general description of a location in the pseudo-physical manifestation of an elder brain’s oneiric collective. It includes adventure ideas that are appropriate for mid-level (Levels 3 to 5) adventur­ing parties. Challenge Rating (CR) is calculated using a party of four as the model.

Xagarest Forest is so old scholars have found references for its existence in old draconic texts. Thousands of years the forest has been a lung of the earth, ever breathing, ever being the home of countless creatures. And now it is dying.

It all started about months ago when the trees in the northern region of the forest showed signs of blight. At first, it looked as if the normal autumn coloration of the leaves had come several months in advance. Hunters and gatherers noticed first and thought it was strange. Something never seen before. It was the first clue that the forest was sick. Things did not get better after that. People from Sirassan City, the nearest settlement, kept hearing growing reports of strange sights in and near the forest. Tales of furry monsters skulking in the dark. Tales of hair-raising screams during twilight. And tales of missing people their relatives never saw again. Then the attacks began, a growing wave of aggression from the forest. It was the animals themselves, but they were not normal. Something, an unexplainable force had transformed them into darker versions of themselves. They were larger, more aggressive, their fur coats showed bald spots where the skin rotted even as the animal still lived.

The wild beasts ravaged the lands. All activities near the forest had to be suspended. Hunting and gathering became a chore for only the bravest among the townsfolk. Several farming communities had to abandon their homes and farms to find refuge in Sirassan City. The abandoned crops and cattle will likely not last as winter approaches if the farmers do not return to finish the job. Things appear almost normal in Sirassan City, but those who understand the situation know that the loss of these harvests and livestock is likely to cause a great number of deaths during the winter. The apparent calm of the moment will be taken over by famine and despair in a few months if nothing is done to help Xagarest Forest.

There are sentient creatures known to roam Xagarest Forest. Creatures of fey origin who seldom share their time with human settlers. However, since the problem began, they were nowhere to be seen. People just inferred they had moved south to avoid whatever had happened to the forest. But one of them has just made its way to Sirassan City, it a male pixie named Taru’Gadin. He talked before the city council and explained that an evil druid planted an evil tree in the middle of Xagarest Forest. It is known as a gulthias tree, a terrible plant that soaks the life out of the forest and is likely to kill it and all creatures within if nothing is done. The pixie continued to explain that no fey creature, such as himself, was able to approach the tree because a magical barrier protects it. All others of his kind fled south. Taru’Gadin concluded by saying that while fey and humans usually go their own separate ways, the current affair affects both civilizations alike. The death of the forest and the presence of the blighted creatures is likely to be the end of Sirassan City too.

The Druid and the Tree

The person responsible for the death of the forest is an evil druid who goes by the name of “Gartank”. He is an old man almost 70 years old. Gartank was born in Sirassan City and knows the area well. Almost forty years ago, he was a ranger in the forest and wished to learn the art of magic and tree herding from the fey creatures in Xagarest Forest. The fey did not refuse Gartank but neither did they teach him anything of value. If anything, they only endured his presence so that they could mock him for his earthly ascendency and lack of natural spark. In his efforts to impress them, Gartank achieved only humiliation and despise which lasted years. Gartank left the forest one day after understanding that the fey would never accept him within his ranks. The fey in Xagarest Forest were not evil, only ill-hearted.

He traveled for years. Gartank visited faraway forests and came across a different kind of fey beings. Evil creatures who shared the same Feywild origin as those in his home forest. This creatures did accept Gartank and showed him the way of nature. They showed him how the forces of nature can be used not only to care and to build, but they can also be used to wither and destroy. The forces of nature are not good nor evil, they are only a spectrum of energy. Where a plant can sprout and flower, it can also wither and die in blight. None of those options are morally good or evil, for life is meant to be born and to die later on. Death is an important part of life, it is necessary for some creatures and plants to die for the new generation to be born. It is the endless cycle of life.

Gartank studied those precepts for decades before he decided to return to his home province. But he did not return empty-handed. Gartank brought a sapling of a gulthias tree from the forest where he learned the arts of life and death. The great gulthias tree there had caused the death of the whole forest, but afterward, a new dark forest had risen from the corpse of the old one. Gartank still held a grudge against the secretive and ill-hearted fey from Xagarest Forest and decided in the woes of revenge that planting the sapling there would be the best way of returning the favor. Gartank reached the center of the northern forest and planted the sapling there. He knew the frail plant would not last long after it were noticed so he used his staff to make a life force sacrifice. Gartank’s sacrifice powered an arcane barrier which would protect the sapling from anything. It was only a few weeks later that the local fey would notice the first signs of corruption.

It is recommended to have a preface and an adventure hook in Sirassan City. These are some suggestions for encounters tied to the numbered areas in the illustration.

As the adventurers make their way to Xagarest Forest, they are attacked by a group of hidden giant goats (4). The goats show signs of blight corruption and cannot be tamed of scared off. Despite their usual nature, these creatures eat flesh.

The adventurers follow the narrow forest trail that should bring them closer to the heart of the corruption. They reach a crossroads where they hear a call for help. Two Sarissan hunters are surrounded by 3 dire wolves. The bodies of the other two hunters lie lifeless on the ground. One of the hunters knows that there is a suspicious cavern that goes under a hill to the north.

There are three entrances to Gartank’s Lair. He knows when the party arrives from the whispers from nearby trees and insects cannot help to relay this information to him. Gartank is never alone. He has 2 corrupted black bears and 8 twig blights that go with him everywhere. Gartank is a level 4 druid. Gartank’s staff does not look like much but it is the only thing which can open the barrier to the gulthias tree.

Nothing can affect the tree until Gartank’s staff is used to destroy the barrier. The tree defends itself from attackers, even if Gartank is already dead. The tree sprouts 2d6 twig blights and 1d8 needle blights. The tree can be destroyed with any slashing weapon in about 2 minutes. Once the tree is destroyed, the forest can live again. Winter is just around the corner, so the forest will not show any signs of improvement until the spring. Blight animals start a two-week hibernation after which they return to normal. However, the return of the fey to the forest is a good sign that things will improve. The fey appreciate the party’s help and vow to be more accepting of humans and their different traditions.

These are the general features of the Xagarest Forest. It is located southwest of Sirassan City. A gulthias tree in the middle of the forest is killing it slowly. It will not be long before it dies and the corruption reaches human settlements.

Terrain. The trees are greyed and dying as one approaches the location of the gulthias tree (Area 4) The forest is dense. Moving through the forest out of the marked paths is considered difficult terrain for the purposes of tactical movement.

Light. The forest canopy is dense enough that only a bare minimum of light filters in. All areas in the forest are dim-light.

Smells and Sounds. When first visiting the forest, the smell of moist soil, greenery, and the occasional fruit tree or bush is common. As a visitor approaches Fey’s End (Area 4), these smells recede and are replaced by the stench of rot and corrosion.

Arcane Barrier. A magical wall similar to a wall of force spell protects the gulthias tree from harm. The only way to turn off this barrier is by touching it with the evil druid’s staff.