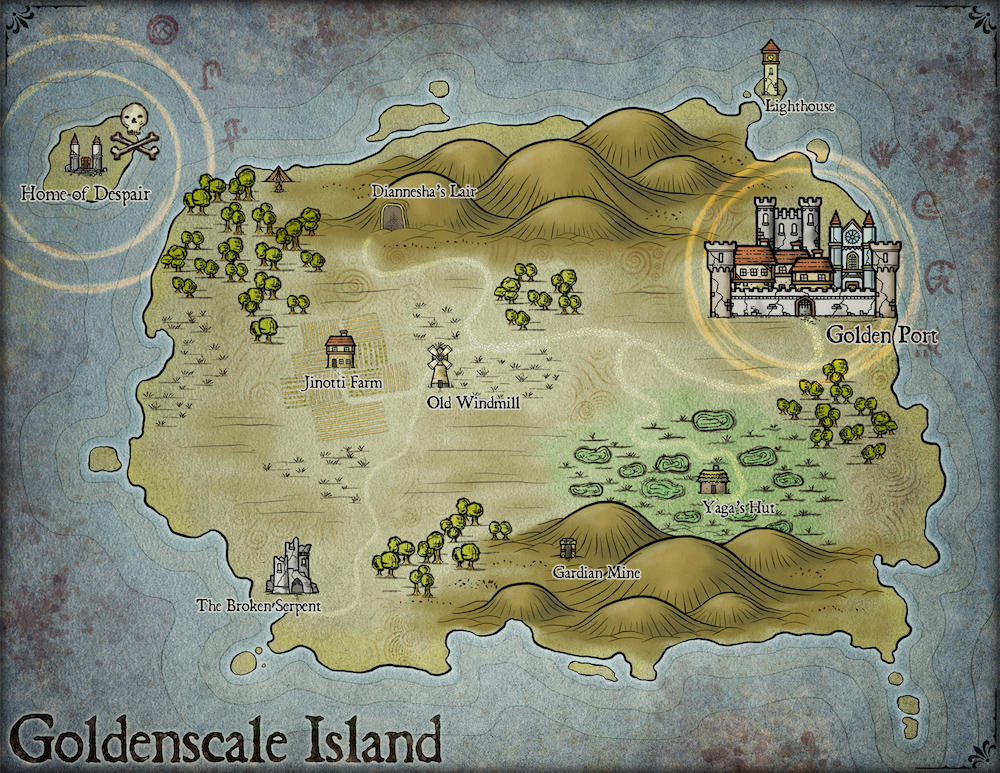 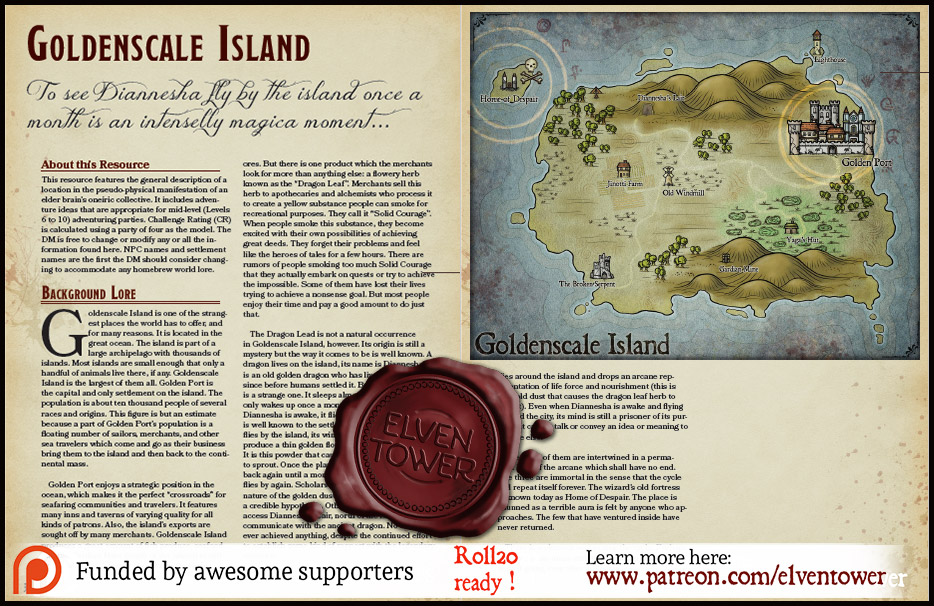 This resource features the general description of a location in the pseudo-physical manifestation of an elder brain’s oneiric collective. It includes adventure ideas that are appropriate for mid-level (Levels 6 to 10) adventur­ing parties. Challenge Rating (CR) is calculated using a party of four as the model. The DM is free to change or modify any or all the information found here. NPC names and settlement names are the first the DM should consider changing to accommodate any homebrew world lore.

Goldenscale Island is one of the strangest places the world has to offer, and for many reasons. It is located in the great ocean. The island is part of a large archipelago with thousands of islands. Most islands are small enough that only a handful of animals live there, if any. Goldenscale Island is the largest of them all. Golden Port is the capital and only settlement on the island. The population is about ten thousand people of several races and origins. This figure is but an estimate because a part of Golden Port’s population is a floating number of sailors, merchants, and other sea travelers which come and go as their business bring them to the island and then back to the continental mass.

Golden Port enjoys a strategic position in the ocean, which makes it the perfect “crossroads” for seafaring communities and travelers. It features many inns and taverns of varying quality for all kinds of patrons. Also, the island’s exports are sought off by many merchants. Goldenscale Island produces a great amount of fish produce, seafood, and the Gardian Mine (south of the island) is still a profitable powerhouse of coal and expensive ores. But there is one product which the merchants look for more than anything else: a flowery herb known as the “Dragon Leaf”. Merchants sell this herb to apothecaries and alchemists who process it to create a yellow substance people can smoke for recreational purposes. They call it “Solid Courage”. When people smoke this substance, they become excited with their own possibilities of achieving great deeds. They forget their problems and feel like the heroes of tales for a few hours. There are rumors of people smoking too much Solid Courage that they actually embark on quests or try to achieve the impossible. Some of them have lost their lives trying to achieve a nonsense goal. But most people enjoy their time and pay a good amount to do just that.

The Dragon Lead is not a natural occurrence in Goldenscale Island, however. Its origin is still a mystery but the way it comes to be is well known. A dragon lives on the island, its name is Diannesha. It is an old golden dragon who has lived on the island since before humans settled it. But this dragon is a strange one. It sleeps almost all the time and only wakes up once a month for four days. When Diannesha is awake, it flies all around the island. It is well known to the settlers that when the dragon flies by the island, its wings appear to shine and produce a thin golden flower that falls on the island. It is this powder that causes the Dragon Leaf herb to sprout. Once the plant is harvested it never grows back again until a month is passed and Diannesha flies by again. Scholars have tried to identify the nature of the golden dust but have failed to provide a credible hypothesis. Other experts have tried to access Diannesha’s Lair, north of the island, to try to communicate with the ancient dragon. No one has ever achieved anything, despite the continued effort to establish some kind of rapport with the legendary creature.

An unexplainable phenomenon in Goldenscale Island is known by the scholars simply as the Arcane Disruption. This is just a well-accepted placeholder name for a situation that they do not understand and cannot explain by any means or magic known to them. What happens is that the weave of magic does not function properly on the island. There is a monthly cycle of influence on magic on the island. The apex of the cycle is the four days that Diannesha wakes up and flies around the city. During those days, all types of magic and the casting of spells are impeded by an unknown force. After the dragon returns to its slumber, magic returns to work as usual. But it grows weaker and fainter as the month ends and the dragon wakes up again. This situation is known by most people but very few experience its effects due to the low abundance of magical objects and spellcasters. One thing that affects most sailors is the fact that compasses tend to malfunction during the four days of the dragon’s flight. But this malfunction does not always happen.

The Dragon and the Faery

Eons ago, the dragon Diannesha lived a normal life on the island. It was in love with a faery from the Feywild. They shared their love and brought happiness to the island. A wizard lived in a fortress in a small island northwest of what is now known as the Goldenscale Island. The wizard’s name is lost to time. It is known from old recovered records and a spellbook that this mage was a practitioner of the dark arts. An evocator of woe, a foreshadower of demise, and a necromancer of damned souls.

One day, the wizard came up with a plan to steal the life force and vitality of the golden dragon. It put a spell on it and tried to kill it but the dragon was too strong a foe to take on. The faery broke the spell and they confronted the wizard together. Cornered and desperate, the wizard tried forbidden spells from olden books to defend himself. The magic came from old tomes recovered from the abyss under the earth and the bottom of the sea. Spells to bind souls to objects and to control the passage of time. Sadly, he discovered that he did not have the expertise to control such magic. The conjurations malfunctioned and turned on him, binding him to time itself, and binding the faery and the dragon to him all the same. Their personas were deconstructed by the spell and transformed into an element of a magical microcosm. A delicate balance of the arcane which none of them could escape voluntarily. The wizard became the cycle of magical affectation that alters the function of magic in the area. The faery became a dry tree at the bottom of the wizard’s fortress and a representation of all life on the island. The dragon, which was farthest away from the site of casting, saw itself trapped in a time loop of endless dreams and a ritual of nourishment. Diannesha became a prisoner of the realm of dreams, a permanent dreamer with no chance of waking up for real. Its love for the faery deconstructed into a ritual of nourishing the land in which the dragon flies around the island and drops an arcane representation of life force and nourishment (this is the gold dust that causes the dragon leaf herb to sprout). Even when Diannesha is awake and flying around the city, its mind is still a prisoner of its purpose. It cannot talk or convey an idea or meaning to anyone else.

The three of them are intertwined in a permanent loop of the arcane which shall have no end. The three are immortal in the sense that the cycle will repeat itself forever. The wizard’s old fortress is known today as Home of Despair. The place is shunned as a terrible aura is felt by anyone who approaches. The few that have ventured inside have never returned.

There is no known way to stop the cycle. Perhaps no mortal can mess with the strong forces that keep it going even after millennia.

These are the general features of Goldenscale Island. It is located two days away from the nearest continental mass. Its location is well documented and it has a healthy fleet of merchant ships.

Terrain. The terrain in Goldenscale Island is varied. There are hills north and south with grassy plains in the middle. A few patches of forests and a bog south of Golden Port.

Weather. Climate is sunny and dull most of the month with occasional rains. The arcane disruption causes a terrible storm once a month. The storm is punctual enough that everyone is ready for it most of the time.

Light. Lighting conditions depend on the weather and the time of day.

Magic and Spells. The intermittent sleep of Diannesha and the influence of the Home of Dispair cause a strange arcane monthly cycle. After the golden dragon goes to sleep, there are 10 days in which magic is unaffected. The next ten days, all spells of levels 1 and 2 fail automatically as the magic is absorbed by the land. The next seven days, spells of level 3 and 4 fail. During the last four days, Diannesha wakes up and all magic on the island is impeded.

Government. The city of Golden Port is the capital and only settlement on the island. It is ruled by King Ostamus Farell. The Farell family is said to have dragon blood in their veins from an old ancestor.