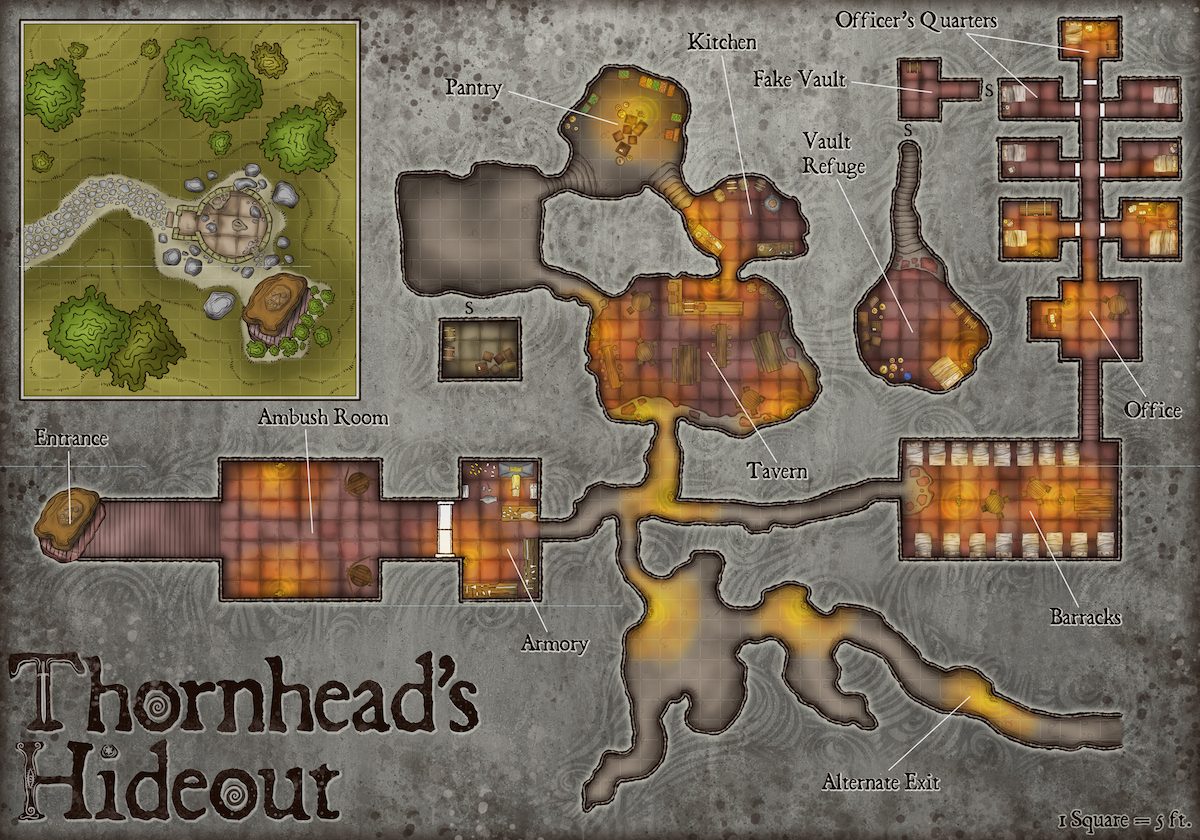 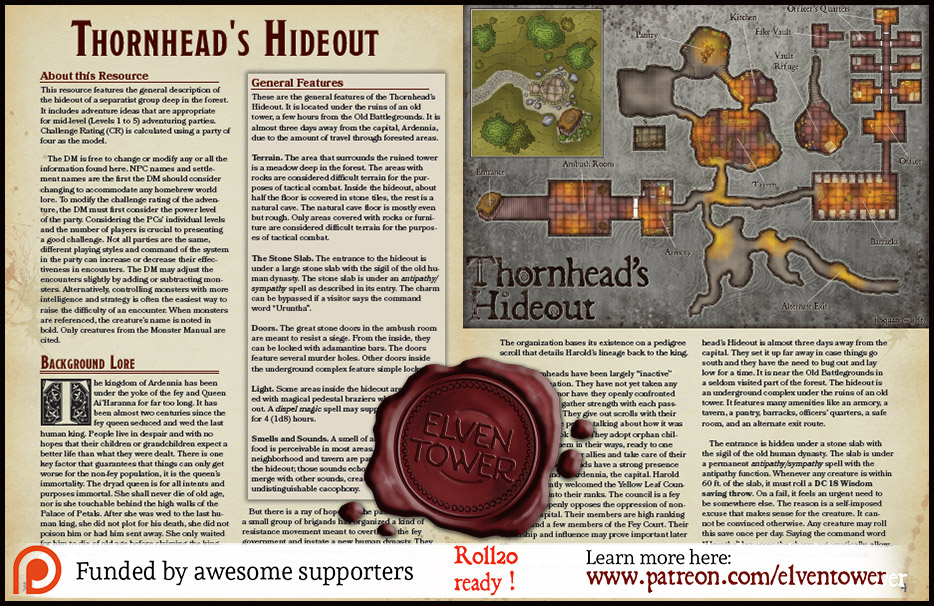 This resource features the general description of the hideout of a separatist group deep in the forest. It includes adventure ideas that are appropriate for mid-level (Levels 1 to 5) adventur­ing parties. Challenge Rating (CR) is calculated using a party of four as the model.

The kingdom of Ardennia has been under the yoke of the fey and Queen Ai’Haranna for far too long. It has been almost two centuries since the fey queen seduced and wed the last human king. People live in despair and with no hopes that their children or grandchildren expect a better life than what they were dealt. There is one key factor that guarantees that things can only get worse for the non-fey population, it is the queen’s immortality. The dryad queen is for all intents and purposes immortal. She shall never die of old age, nor is she touchable behind the high walls of the Palace of Petals. After she was wed to the last human king, she did not plot for his death, she did not poison him or had him sent away. She only waited for him to die of old age before claiming the kingdom as her own.

But there is a ray of hope. For the past fifty years, a small group of brigands has organized a kind of resistance movement meant to overthrow the fey government and instate a new human dynasty. They are collectively known as the Thornheads. They claim that their leader, Harold Guinesh, is the descendant of one of the last human king’s bastards. The organization bases its existence on a pedigree scroll that details Harold’s lineage back to the king.

The Thornheads have been largely “inactive” since their creation. They have not yet taken any city or outpost, nor have they openly confronted the crown. They gather strength with each passing year, though. They give out scrolls with their mission and have people talking about how it was before the fey took over. They adopt orphan children and train them in their ways, ready to one day revolt. They gather allies and take care of their friends. The Thornheads have a strong presence in Faris City and in Ardennia, the capital. Harold Guinesh recently welcomed the Yellow Leaf Council members into their ranks. The council is a fey faction that openly opposes the oppression of non-fey in the capital. Their members are high ranking officials and a few members of the Fey Court. Their friendship and influence may prove important later on.

Despite their presence in those cities, the Thornhead’s Hideout is almost three days away from the capital. They set it up far away in case things go south and they have the need to bug out and lay low for a time. It is near the Old Battlegrounds in a seldom visited part of the forest. The hideout is an underground complex under the ruins of an old tower. It features many amenities like an armory, a tavern, a pantry, barracks, officers’ quarters, a safe room, and an alternate exit route.

The hideout has one weak point when it comes to how hidden it is: the armory. Having a working forge to make weapons for the Thornheads is a challenge to hide. So far, the only working solution is to direct the smoke from the forge through a pipe that reaches the forest soil almost a mile away from the hideout. There is a “fake camp” in the spot. The smoke exhaust comes right where the campfire is. Two or three Thornhead agents are always there on watch when the forge is in use to make it seem more real. So far it has worked.

The hideout would not be what it is if it were not for the lively tavern in its core. The tavern is active all day round. A minstrel is usually on watch sharing songs, refrains, and stories. The barracks feature double bunk beds in rows. There is enough space to house 32 soldiers and six officers. The last chamber in the officers’ section is Harold Guinesh’s place.

One of the officers’ quarters is more than it seems. Behind and expertly crafted brick replica beside the bed is a red switch. Pressing the switch causes a section of the western wall to slide to the right, revealing a short tunnel to the vault. This vault is not real. It is only a decoy designed to fool any would-be invaders. There is a second secret passage on the south wall of the fake vault. This tunnel leads to a descending natural flight of stairs that lead to a vault and refuge. The chamber contains the most valuable treasures and magic artifacts the Thornheads have collected. It is also fitted with furniture and supplies for more than a month. It has never been used a safe room yet but it is supposed to contain all that is needed to stay out of sight for a good while.

These are the general features of the Thornhead’s Hideout. It is located under the ruins of an old tower, a few hours from the Old Battlegrounds. It is almost three days away from the capital, Ardennia, due to the amount of travel through forested areas.

The Stone Slab. The entrance to the hideout is under a large stone slab with the sigil of the old human dynasty. The stone slab is under an antipathy/sympathy spell as described in its entry. The charm can be bypassed if a visitor says the command word “Uruntha”.

Doors. The great stone doors in the ambush room are meant to resist a siege. From the inside, they can be locked with adamantine bars. The doors feature several murder holes. Other doors inside the underground complex feature simple locks.

Light. Some areas inside the hideout are illuminated with magical pedestal braziers which never go out. A dispel magic spell may suppress one brazier for 4 (1d8) hours.

Smells and Sounds. A smell of ale and stale food is perceivable in most areas. The noises of a neighborhood and tavern are part of normal life in the hideout; those sounds echo back and forth and merge with other sounds, creating a low-pitched undistinguishable cacophony. 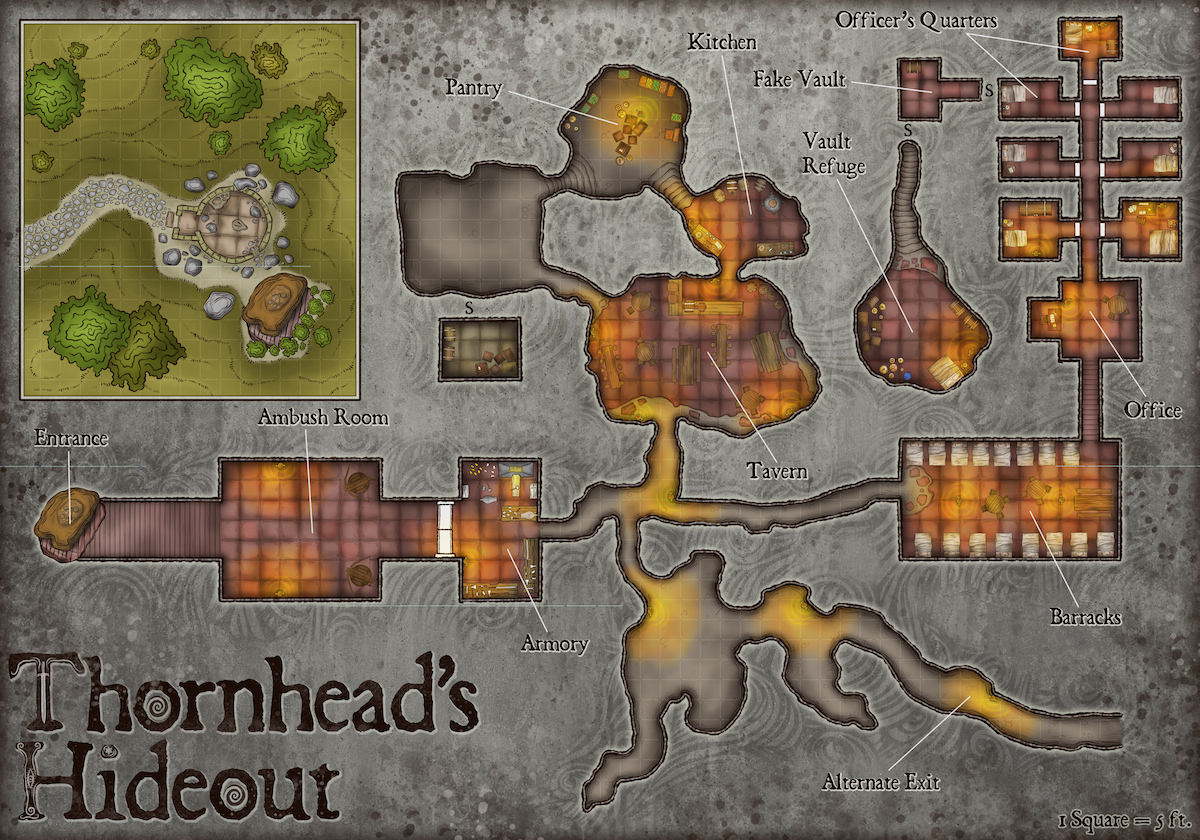