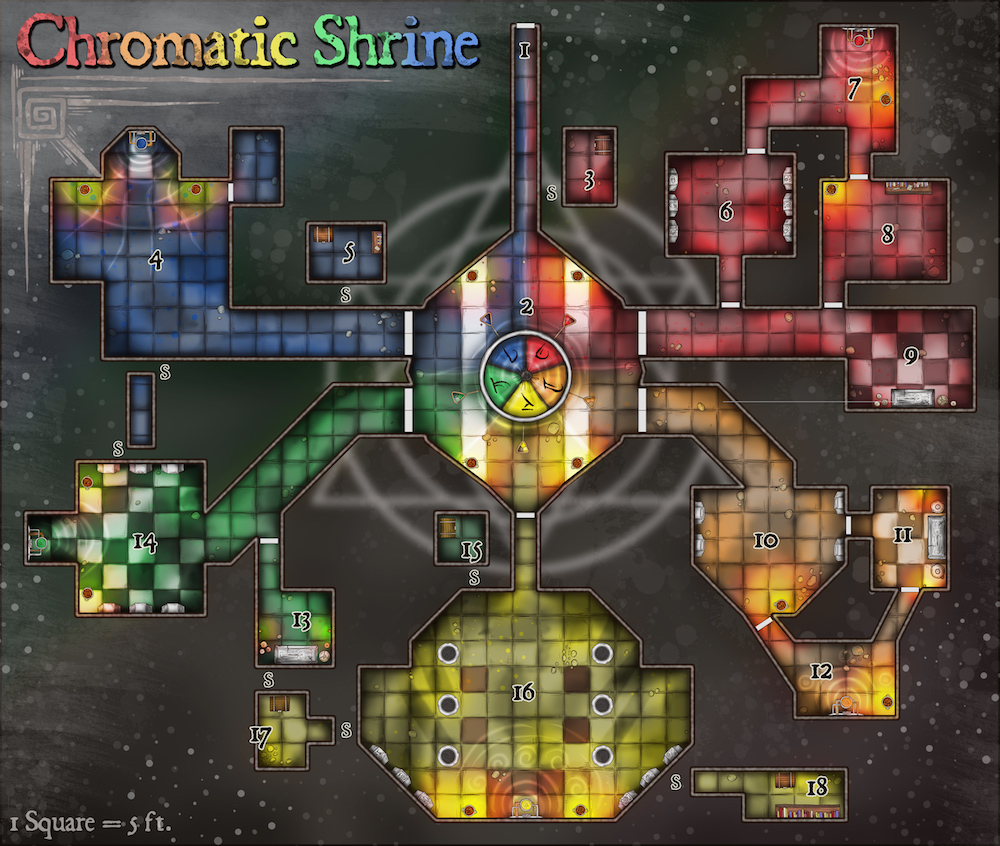 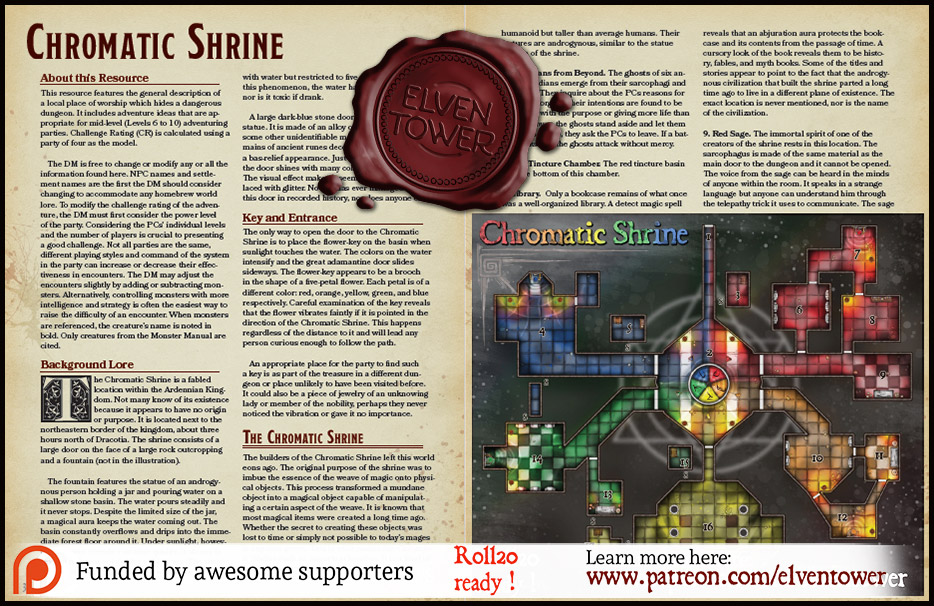 This resource features the general description of a local place of worship which hides a dangerous dungeon. It includes adventure ideas that are appropriate for mid-level (Levels 6 to 10) adventur­ing parties. Challenge Rating (CR) is calculated using a party of four as the model.

The Chromatic Shrine is a fabled location within the Ardennian Kingdom. Not many know of its existence because it appears to have no origin or purpose. It is located next to the northeastern border of the kingdom, about three hours north of Dracotia. The shrine consists of a large door on the face of a large rock outcropping and a fountain (not in the illustration).

The fountain features the statue of an androgynous person holding a jar and pouring water on a shallow stone basin. The water pours steadily and it never stops. Despite the limited size of the jar, a magical aura keeps the water coming out. The basin constantly overflows and drips into the immediate forest floor around it. Under sunlight, however, the water reveals a strange quality. It shines in several different colors, five to be exact. The visual effect is similar to that of combustible oil mixed with water but restricted to five colors only. Despite this phenomenon, the water has no chemical traits, nor is it toxic if drank.

A large dark-blue stone door towers behind the statue. It is made of an alloy of adamantine and some other unidentifiable metal. The eroded remains of ancient runes decorate the door and give it a bas-relief appearance. Just like the fountain water, the door shines with many colors under sunlight. The visual effect makes it seem as if the door were laced with glitter. No one has ever managed to open this door in recorded history, nor does anyone care.

The only way to open the door to the Chromatic Shrine is to place the flower-key on the basin when sunlight touches the water. The colors on the water intensify and the great adamantine door slides sideways. The flower-key appears to be a brooch in the shape of a five-petal flower. Each petal is of a different color: red, orange, yellow, green, and blue respectively. Careful examination of the key reveals that the flower vibrates faintly if it is pointed in the direction of the Chromatic Shrine. This happens regardless of the distance to it and will lead any person curious enough to follow the path.

An appropriate place for the party to find such a key is as part of the treasure in a different dungeon or place unlikely to have been visited before. It could also be a piece of jewelry of an unknowing lady or member of the nobility, perhaps they never noticed the vibration or gave it no importance.

The builders of the Chromatic Shrine left this world eons ago. The original purpose of the shrine was to imbue the essence of the weave of magic onto physical objects. This process transformed a mundane object into a magical object capable of manipulating a certain aspect of the weave. It is known that most magical items were created a long time ago. Whether the secret to creating these objects was lost to time or simply not possible to today’s mages is anyone’s guess. This is what makes the Chromatic Shrine such an important location. It is a kind of factory of magical devices.

In order to use the shrine as intended, a visitor must first access the central hub where the chromatic forge is. Any spellcaster can power the forge by focusing his or her own magical power on the forge. This is equivalent to spending a level 3 spell slot. Five locations within the underground complex feature a magical/mechanical device that produces a special kind of paint or tincture. A visitor must visit each of these chambers and take a sample of the tincture back to the central hub. The object to be enchanted must be drenched with the five different colored tinctures and placed on top of the arcane forge. Only the builders of the shrine could manipulate the delicate and precise process of enchantment to their own needs. A visitor has no agency in what kind of enchantment is placed on the object, however.

These are the general features of the Chromatic Shrine. It is located in a forest near the northeastern border of the Ardennian Kingdom. The known area is an outdoors fountain of an androgynous person pouring water on a basin. The water features five colors under sunlight.

Terrain. The floor in the Chromatic Shrine is made of granite floor tiles. Most of them are in good condition and, thus, pose no obstacle for movement.

Doors. The dungeon’s main door can only be opened by placing the chromatic key in the basin outside (not in the illustration). Other doors within the complex are all stone reinforced doors. They slide sideways automatically if a creature moves within 5 feet from them.

Light. Some locations feature magical braziers or magical candle holders. They are perpetually on. A dispel magic or similar spell can turn any of these lights off for an hour. Other areas are in complete darkness. None of these devices produce any heat or sound.

Smells and Sounds. The Chromatic Shrine has been enclosed for a long time. A sterile, dusty smell pervades the location. No sound is heard except the echoes of any sounds the visitors produce.