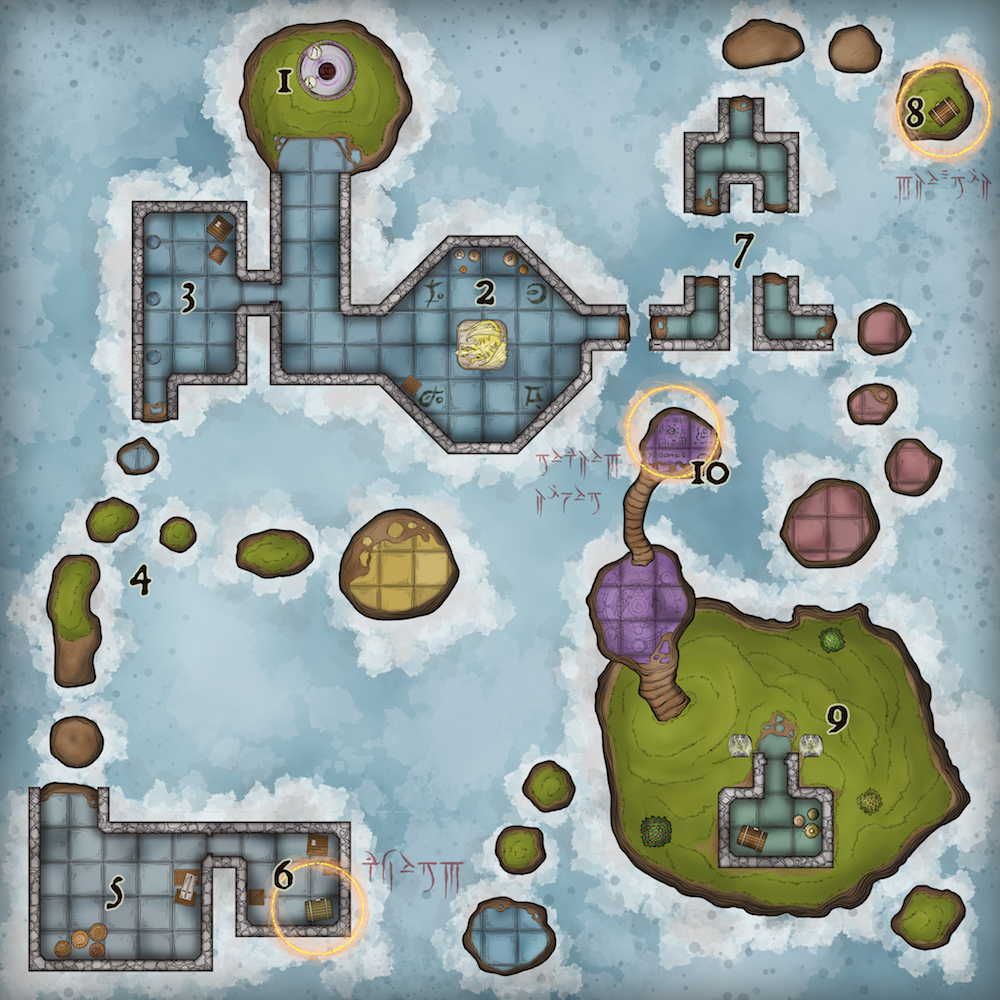 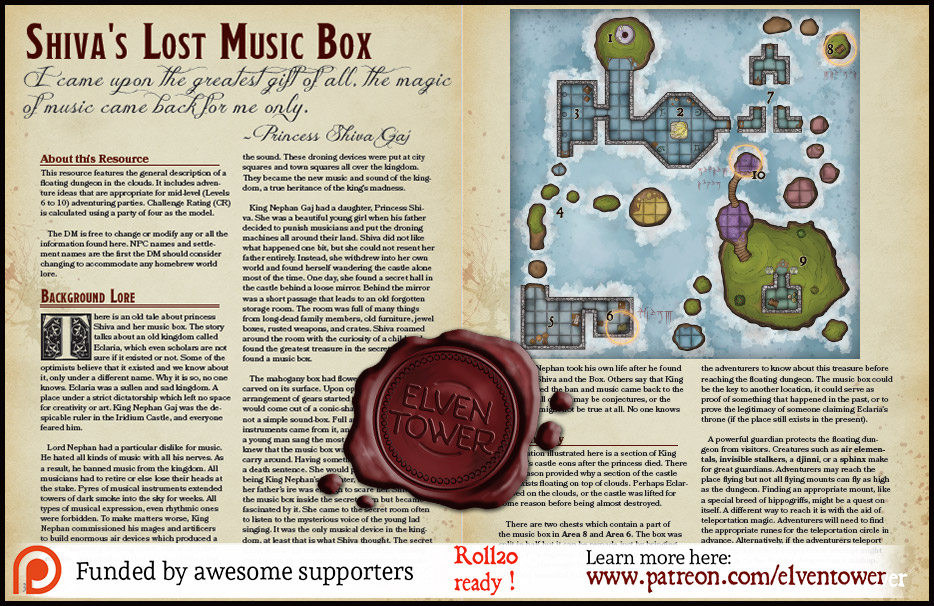 This resource features the general description of a floating dungeon in the clouds. It includes adventure ideas that are appropriate for mid-level (Levels 6 to 10) adventur­ing parties. Challenge Rating (CR) is calculated using a party of four as the model.

There is an old tale about princess Shiva and her music box. The story talks about an old kingdom called Eclaria, which even scholars are not sure if it existed or not. Some of the optimists believe that it existed and we know about it, only under a different name. Why it is so, no one knows. Eclaria was a sullen and sad kingdom. A place under a strict dictatorship which left no space for creativity or art. King Nephan Gaj was the despicable ruler in the Iridium Castle, and everyone feared him.

Lord Nephan had a particular dislike for music. He hated all kinds of music with all his nerves. As a result, he banned music from the kingdom. All musicians had to retire or else lose their heads at the stake. Pyres of musical instruments extended towers of dark smoke into the sky for weeks. All types of musical expression, even rhythmic ones were forbidden. To make matters worse, King Nephan commissioned his mages and artificers to build enormous air devices which produced a neutral sounding droning noise. The sound they produced was similar to that of a bumblebee but with a stuttering effect which added randomness to the sound. These droning devices were put at city squares and town squares all over the kingdom. They became the new music and sound of the kingdom, a true heritance of the king’s madness.

King Nephan Gaj had a daughter, Princess Shiva. She was a beautiful young girl when his father decided to punish musicians and put the droning machines all around their land. Shiva did not like what happened one bit, but she could not resent her father entirely. Instead, she withdrew into her own world and found herself wandering the castle alone most of the time. One day, she found a secret hall in the castle behind a loose mirror. Behind the mirror was a short passage that leads to an old forgotten storage room. The room was full of many things from long-dead family members, old furniture, jewel boxes, rusted weapons, and crates. Shiva roamed around the room with the curiosity of a child and found the greatest treasure in the secret room. She found a music box.

The mahogany box had flowers and a landscape carved on its surface. Upon opening, a delicate arrangement of gears started turning and sound would come out of a conic-shaped speaker. It was not a simple sound-box. Full arrangements of instruments came from it, and a beautiful voice of a young man sang the most precious songs. Shiva knew that the music box was a dangerous thing to carry around. Having something like this carried a death sentence. She would probably be fine, being King Nephan’s daughter, but the sole idea of her father’s ire was enough to scare her. Shiva left the music box inside the secret room but became fascinated by it. She came to the secret room often to listen to the mysterious voice of the young lad singing. It was the only musical device in the kingdom, at least that is what Shiva thought. The secret room was so far inside the castle that the droning machine in the courtyard could not ruin the music box performance. The voice from the box sounded familiar but Shiva could not place it, despite her efforts. Years passed.

One day, in an absent-minded slip of her usual cautious behavior, Shiva was alone in her room singing one of the songs from the music box when King Nephan entered unannounced. She held back a scream as she turned around and saw her father red with fury. Her father started screaming, demanding to know how she had learned that song. Shiva had never seen the king so out of his senses, it was as if he were a completely different person. Shiva tried to run away from her chamber. As she fled through the castle with her father closing in behind her, Shiva slipped on her long dress and fell down a long flight of stairs. Shiva was unconscious and injured for a few days, and then she died.

King Nephan was assaulted by feelings of anger, remorse, and regret. He blamed himself for Shiva’s death and the weight of the guilt made him depressed and suicidal. He could not make sense of Shiva knowing the song for months after her death until he remembered something important. He wondered how he had not remembered about the music box. It had been so long that he had all but forgotten about the small magical device. King Nephan visited the secret room only he knew was behind a mirror. This storage room had never been searched when musical instruments were banned. King Nephan found the music box in a different place, it was clean and oiled. Shiva had been using it, he thought with tears in his eyes.

King Nephan had not thought about this for a very long time. Memories from the past came surging to his mind. The faces of his demanding parents forcing him to learn to play the harp and singing. He had to practice for long hours just to please them. And they would record his finished performances on the magic music box. He practiced so much that the music he played and sang was beautiful, but he hated it. Despite that, he could never throw away the music box with all of his songs recorded, but he put it in the only room he knew no one in the castle would visit. Except that Shiva had found it not so long ago.

King Nephan grabbed the music box with a longing expression. It symbolized nothing but bad memories to him, but he could not deny it had enormous significance in his life. He opened it slowly, wondering what song would come out from it. Trumpets sang, a stringed instrument strummed, and then his harp. He knew the song well, even after all these years. Then, the voice started singing. But it was not what he expected. The voice that came from the music box was like an angel’s. Such a beautiful voice could not be his, even in his youth. With regret and tears, he knew this was Shiva’s voice. Somehow she had managed to use the recording function of the magic box and recorded her own voice. A perfect homage to the song he himself had recorded years ago.

Little is known of Eclaria after what the tale describes. Some extended versions of the tale say that King Nephan took his own life after he found out about Shiva and the Box. Others say that King Nephan lifted the ban and music came back to the kingdom. All of that may be conjectures, or the whole tale might not be true at all. No one knows about that.

The location illustrated here is a section of King Nephan’s castle eons after the princess died. There is no reason provided why a section of the castle now exists floating on top of clouds. Perhaps Eclaria lived on the clouds, or the castle was lifted for some reason before being almost destroyed.

There are two chests which contain a part of the music box in Area 8 and Area 6. The box was split in half but it can be remade just by bringing both halves together. The music box might not have powerful magic but it may have other uses. It is recommended to insert a plausible reason for the adventurers to know about this treasure before reaching the floating dungeon. The music box could be the key to another location, it could serve as proof of something that happened in the past, or to prove the legitimacy of someone claiming Eclaria’s throne (if the place still exists in the present).

A powerful guardian protects the floating dungeon from visitors. Creatures such as air elementals, invisible stalkers, a djinni, or a sphinx make for great guardians. Adventurers may reach the place flying but not all flying mounts can fly as high as the dungeon. Finding an appropriate mount, like a special breed of hippogriffs, might be a quest on itself. A different way to reach it is with the aid of teleportation magic. Adventurers will need to find the appropriate runes for the teleportation circle in advance. Alternatively, if the adventurers teleport frequently, a botched teleportation attempt might bring them to the floating dungeon as a mishap.

These are the general features of the floating dungeon. It is located high in the sky behind a permanent patch of clouds which never goes away.

Position. The floating dungeon is not static in the air. The cloud which supports it travels through the skies at the whim of air currents. It offers quite a bit of resistance, thus it moves around very slowly.

Islands. The floating dungeon is formed of several small islets of land which float on top of magical clouds. Originally, the dungeon had a different shape and distribution, but some of the islands and rooms have broken off after storms or other weather events. Island’s positions are firm and cannot be moved about. Despite this, the clouds that appear to support the whole structure behave in their usual gaseous way if interacted with.

Weather. The floating dungeon is high enough in the air that any visitor will suffer the effects of extreme cold temperatures minutes after arriving. Appropriate clothing or magical aid is needed to explore the dungeon.

Lighting. Lighting conditions in the floating dungeon depend on the time of the day and weather. Enclosed locations lack any light sources but enough light comes in for them to be considered dim-lighted.

Falling. There are no bridges or secure ways to cross from one island to the next. Should a creature fall from the floating dungeon, it crashes into the surface thousands of feet below and dies. Even if the ocean is below, a fall from such heights is fatal.