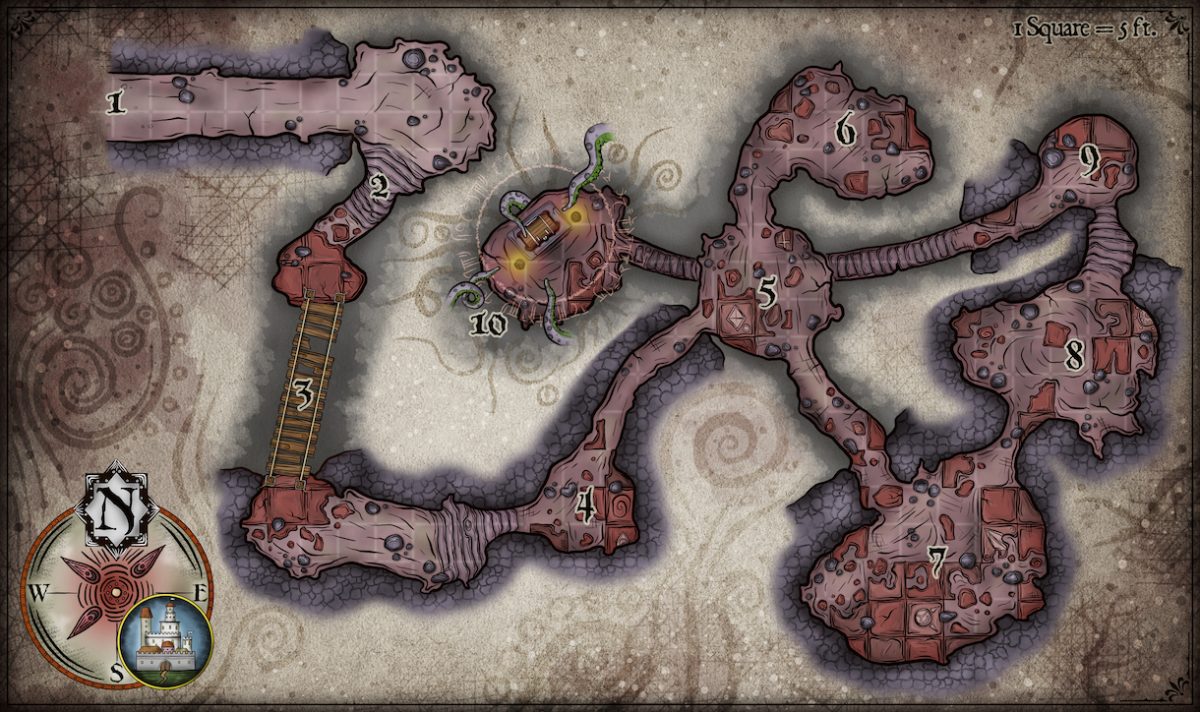 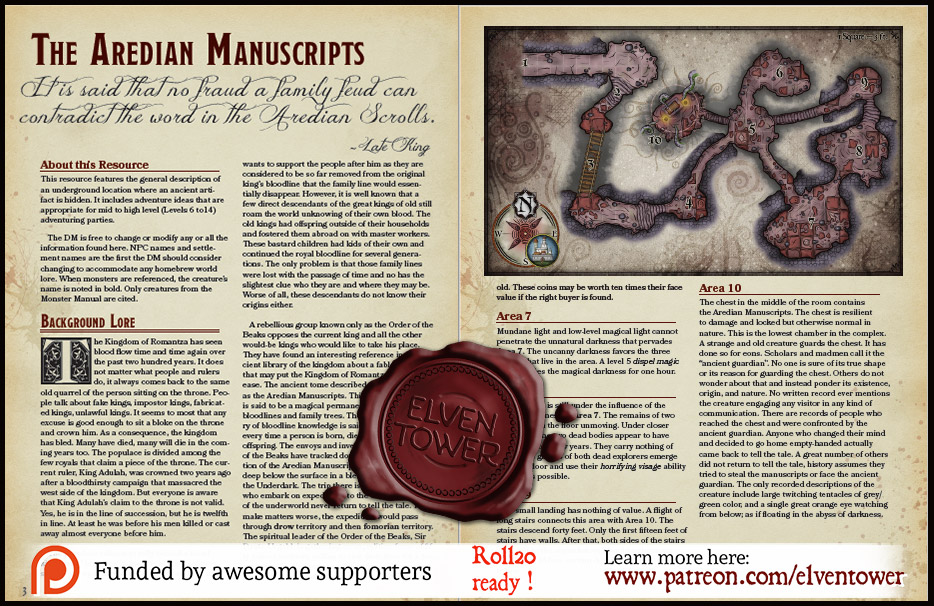 This resource features the general description of an underground location where an ancient artifact is hidden. It includes adventure ideas that are appropriate for mid to high level (Levels 6 to14) adventur­ing parties.

The Kingdom of Romantza has seen blood flow time and time again over the past two hundred years. It does not matter what people and rulers do, it always comes back to the same old quarrel of the person sitting on the throne. People talk about fake kings, impostor kings, fabricated kings, unlawful kings. It seems to most that any excuse is good enough to sit a bloke on the throne and crown him. As a consequence, the kingdom has bled. Many have died, many will die in the coming years too. The populace is divided among the few royals that claim a piece of the throne. The current ruler, King Adulah, was crowned two years ago after a bloodthirsty campaign that massacred the west side of the kingdom. But everyone is aware that King Adulah’s claim to the throne is not valid. Yes, he is in the line of succession, but he is twelfth in line. At least he was before his men killed or cast away almost everyone before him.

The populace refuses to rally behind a fraud king even if his place in the line of succession is somewhat legitimate. On the other hand, no one wants to support the people after him as they are considered to be so far removed from the original king’s bloodline that the family line would essentially disappear. However, it is well known that a few direct descendants of the great kings of old still roam the world unknowing of their own blood. The old kings had offspring outside of their households and fostered them abroad on with master workers. These bastard children had kids of their own and continued the royal bloodline for several generations. The only problem is that those family lines were lost with the passage of time and no has the slightest clue who they are and where they may be. Worse of all, these descendants do not know their origins either.

A rebellious group known only as the Order of the Beaks opposes the current king and all the other would-be kings who would like to take his place. They have found an interesting reference in the ancient library of the kingdom about a fabled artifact that may put the Kingdom of Romantza’s pains at ease. The ancient tome described what is known as the Aredian Manuscripts. This arcane document is said to be a magical permanent recording of all bloodlines and family trees. The ancient repository of bloodline knowledge is said to update itself every time a person is born, dies, marries, or has offspring. The envoys and investigators of the Order of the Beaks have tracked down the possible location of the Aredian Manuscripts. They are located deep below the surface in a bleak place known as the Underdark. The trip there is dangerous. Many who embark on expeditions to the unknown depths of the underworld never return to tell the tale. To make matters worse, the expedition would pass through drow territory and then fomorian territory. The spiritual leader of the Order of the Beaks, Sir Dante Urgald, is gathering an expedition force of fifty valiant warriors willing to risk their lives for a better future for Romantza and its citizens. Renowned warriors, knights, war veterans, and mercenaries are welcome to join their ranks with a promise of gold, glory, and a great place in the new kingdom once a rightful king is found and put on the throne.

The entrance of the underground complex is found at the end of a branching tunnel that originates from a great cave where a colony of fomorians lives. A successful DC 17 Dexterity (Stealth) group check allows the party to traverse the fomorian community unseen. Otherwise, they will face a group of fomorian warriors.

After a 40-feet-long tunnel, it opens up to a great empty cave where many smaller tunnels and passageways move steadily downwards. Looking down, two lights shine below. A wooden structure appears to be in between both lights. The distance is difficult to judge but the lights must be at least

After a short flight of descending stairs, there is a wooden rope bridge. Several steps of the bridge have fallen to the abyss below. A successful DC 13 Dexterity (Acrobatics) check allows a character to cross over to the other side. Failure by 5 or more means the character falls down to certain death thousands of feet below.

The remains of a piece of maroon stone tile feature a bas-relief with the general shape of a spiral. Tiny runes etched to the revolving shape can be seen upon close inspection. A successful DC 16 Intelligence (Arcana) check reveals that the runes used to contain a strong explosive spell. It appears as if the chamber used to be larger but the explosion caved in sections of the ceiling.

This area is 40 ft. above the stairs that lead to Area 10. Five wraiths haunt this place in eternal hunger. They used to be explorers in life. They met death after facing the ancient guardian.

This chamber does not appear to have anything of interest or value. A passive Perception score of 16 or higher or a successful DC 16 Wisdom (Perception) check reveals a secret compartment under a piece of broken floor tile. A small iron chest contains 100 gold coins with the face of a king of old. These coins may be worth ten times their face value if the right buyer is found.

Mundane light and low-level magical light cannot penetrate the unnatural darkness that pervades Area 7. The uncanny darkness favors the three ropers that live in the area. A level 5 dispel magic spell nullifies the magical darkness for one hour.

Half the area is still under the influence of the magical darkness of Area 7. The remains of two people lay on the floor unmoving. Under closer inspection, the two dead bodies appear to have been here for a few years. They carry nothing of value. The ghosts of both dead explorers emerge from the floor and use their horrifying visage ability as soon as possible.

This small landing has nothing of value. A flight of long stairs connects this area with Area 10. The stairs descend forty feet. Only the first fifteen feet of stairs have walls. After that, both sides of the stairs are open to the abyss below. Should a character fall, he would face certain death thousands of feet below.

The chest in the middle of the room contains the Aredian Manuscripts. The chest is resilient to damage and locked but otherwise normal in nature. This is the lowest chamber in the complex. A strange and old creature guards the chest. It has done so for eons. Scholars and madmen call it the “ancient guardian”. No one is sure of its true shape or its reason for guarding the chest. Others do not wonder about that and instead ponder its existence, origin, and nature. No written record ever mentions the creature engaging any visitor in any kind of communication. There are records of people who reached the chest and were confronted by the ancient guardian. Anyone who changed their mind and decided to go home empty-handed actually came back to tell the tale. A great number of others did not return to tell the tale, history assumes they tried to steal the manuscripts or face the ancient guardian. The only recorded descriptions of the creature include large twitching tentacles of grey/green color, and a single great orange eye watching from below; as if floating in the abyss of darkness.

These are the general features of the underground lair of the ancient guardian from below. It is located one mile below the surface in a seldom visited section of the Underdark. The path was forgotten eons ago. The area in question is currently home to a colony of fomorians which worship the ancient guardian.

Terrain. The floor inside the dungeon is rough-hewn in most places. Some areas still conserve broken parts of the maroon stone tiles that used to cover the whole complex. Squares with pieces of rock are considered difficult terrain for the purpose of tactical combat.

Light. Most areas inside the dungeon are in complete darkness. Area 10 features two braziers with magical flames that never extinguish. The area is brightly lit. The stairs towards Area 9 are considered to be dimly lit. Area 7 features a magical area effect which consumes any form of mundane or low-level light.

Smells and Sounds. The smell of wet stone and limestone is prevalent through to underground complex. Faint clicking noises and incomprehensible whispers appear to come from the abyss under the complex, farther down than Area 10. There is no clear pattern for these noises. Furthermore, some of them are not vibrations in the air but rather psychic remnants of communication that the ancient guardian produces. Because of this, some noises could be heard by only one or more people in the group.

Chest. The chest that protects the fabled Aredian Manuscripts is made of a strange type of unknown wood and reinforced with iron. Despite this, the chest defies logic as it cannot be destroyed or breached with mundane weapons. Only adamantine magical weapons can damage the surface of the chest. A successful DC 19 Dexterity (Thieves Tools) check allows a character to pick the lock and access the chest’s contents. 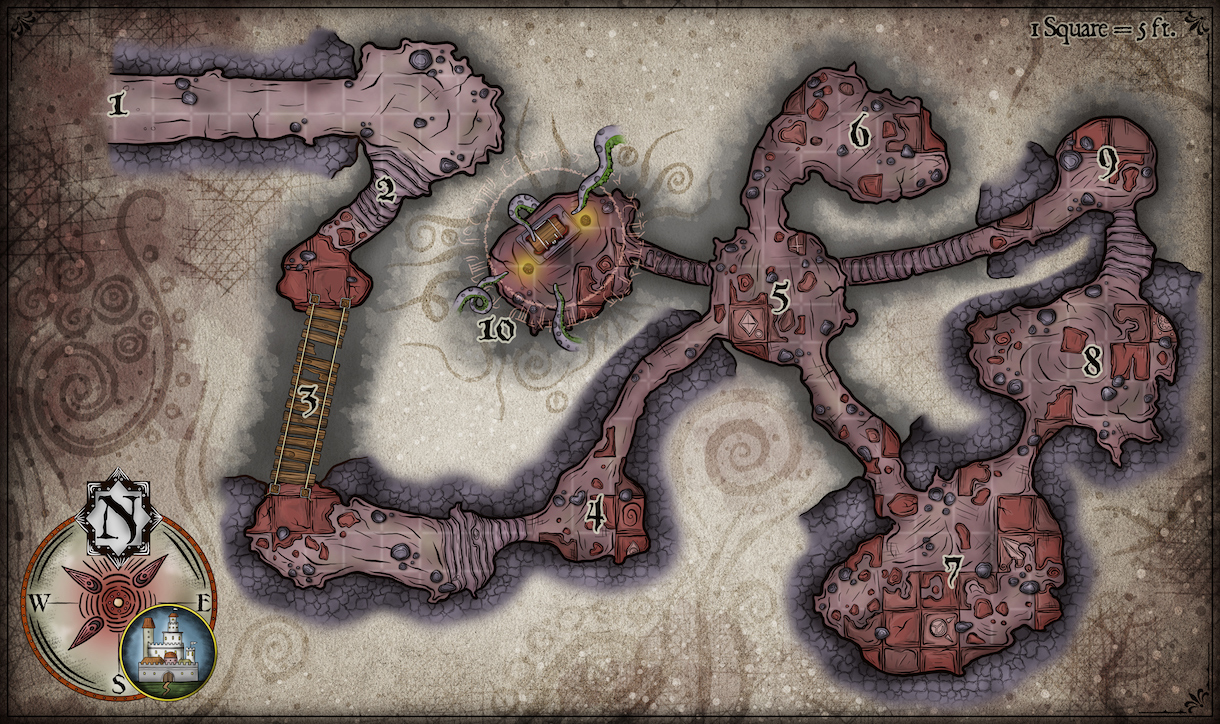