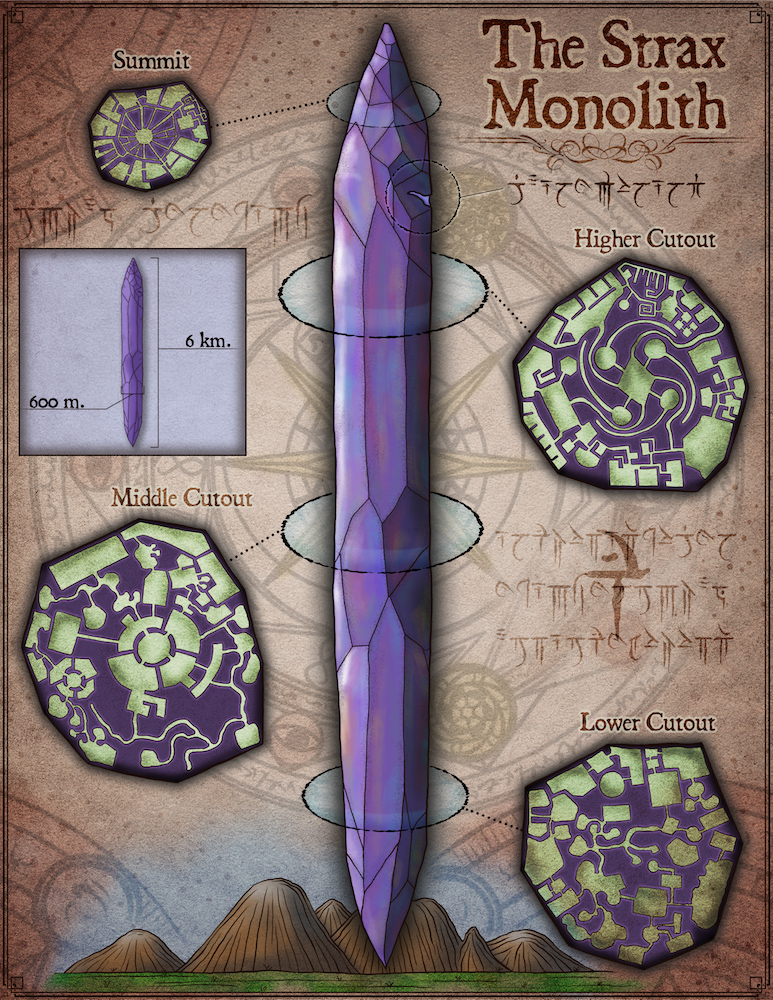 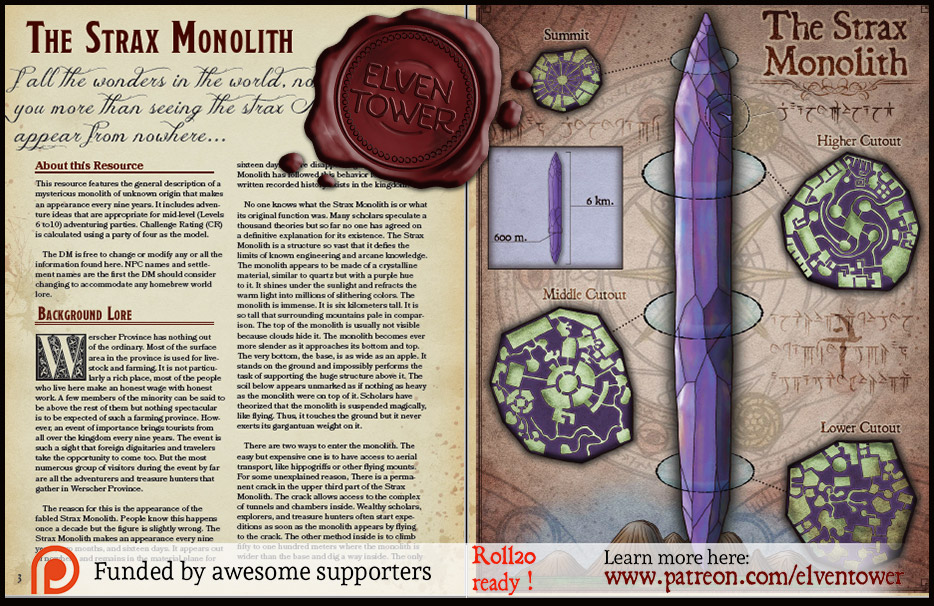 This resource features the general description of a mysterious monolith of unknown origin that makes an appearance every nine years. It includes adventure ideas that are appropriate for mid-level (Levels 6 to10) adventur­ing parties. Challenge Rating (CR) is calculated using a party of four as the model.

Werscher Province has nothing out of the ordinary. Most of the surface area in the province is used for livestock and farming. It is not particularly a rich place, most of the people who live here make an honest wage with honest work. A few members of the minority can be said to be above the rest of them but nothing spectacular is to be expected of such a farming province. However, an event of importance brings tourists from all over the kingdom every nine years. The event is such a sight that foreign dignitaries and travelers take the opportunity to come too. But the most numerous group of visitors during the event by far are all the adventurers and treasure hunters that gather in Werscher Province.

No one knows what the Strax Monolith is or what its original function was. Many scholars speculate a thousand theories but so far no one has agreed on a definitive explanation for its existence. The Strax Monolith is a structure so vast that it defies the limits of known engineering and arcane knowledge. The monolith appears to be made of a crystalline material, similar to quartz but with a purple hue to it. It shines under the sunlight and refracts the warm light into millions of slithering colors. The monolith is immense. It is six kilometers tall. It is so tall that surrounding mountains pale in comparison. The top of the monolith is usually not visible because clouds hide it. The monolith becomes ever more slender as it approaches its bottom and top. The very bottom, the base, is as wide as an apple. It stands on the ground and impossibly performs the task of supporting the huge structure above it. The soil below appears unmarked as if nothing as heavy as the monolith were on top of it. Scholars have theorized that the monolith is suspended magically, like flying. Thus, it touches the ground but it never exerts its gargantuan weight on it.

There are two ways to enter the monolith. The easy but expensive one is to have access to aerial transport, like hippogriffs or other flying mounts. For some unexplained reason, There is a permanent crack in the upper third part of the Strax Monolith. The crack allows access to the complex of tunnels and chambers inside. Wealthy scholars, explorers, and treasure hunters often start expeditions as soon as the monolith appears by flying to the crack. The other method inside is to climb fifty to one hundred meters where the monolith is wider than the base and dig a way inside. The only tools capable of breaking the strong outer layer are adamantine tools and implements. Breaking a way inside the monolith usually means spending a day or two hacking at the monolith’s surface, depending on the width of the crystal at the chosen spot. These entrances are known to be temporary because the surface of the monolith reforms when it appears again nine years later. The only permanent crack is the one on the upper third, that crack has never magically regenerated.

The reason why so many explorers and adventurers gather to find a way inside the monolith is due to the untold treasures that lie within. It is the stuff of legends and myth the number of artifacts and magical objects that treasure hunters have recovered from the labyrinthine passages inside the Strax Monolith. Expert hunters have the task down to a science. They are aware that the monolith will only stay for sixteen days before phasing out to another plane of existence. This means that surveyors have eight days to get as far inside as possible, and then another eight days to find a way back to the entrance. The strategy may vary for wealthy explorers with access to aerial mounts. Explorers accessing the Strax Monolith from the top may go down for as long as fourteen days; they then have two days to carve their way out through the surface at a height of several thousand meters. Then, they only have to call their mounts or henchmen to rescue them.

The Strax Monolith is a strange structure. It is divided by levels. In most levels, the ceiling is forty feet tall. It is tall enough for creatures such as giants, but the original users of the monolith still remain a mystery. Explorers are of the opinion that the monolith features more than four hundred levels, though no exploration team has ever explored more than fifty in the sixteen days they have available. The structure of the different levels changes depending on the height of the particular level. No one knows the reason, but the levels in the lower third of the monolith appear to be rough caves with a few well-constructed chambers. The middle of the monolith features a more complicated scheme of chambers and tunnels, more like a purposely built labyrinth. All levels are interconnected by round stairways that move up or down at least five levels.

Exploring the Strax Monolith is a dangerous task. There are deadly traps and savage creatures from extra-dimensional origin all around the complex. Over the decades, numerous explorers have disappeared with the monolith. It is a known fact that at least thirty percent of the people who go in never return. Their fates may vary. Some of them encounter perilous creatures and die to them. Others get greedy or lost and lack the necessary time to get out of the monolith in time. Out of the many that have traveled to another dimension with the monolith, no one has ever returned. Perhaps some of them have found a new home in a different plane since their options for returning are limited. But it is commonly accepted that all missing explorers after the monolith phases out of the material plane are as good as dead.

It is not within the scope of this release to account for the real purpose or origin of the monolith. It is up to the DM to the explain this or leave it a mystery. All in all, the Strax Monolith is a great place to explore which may well become a timed race to escape the place before it phases out of existence

These are the general features of the Strax Monolith. It is six kilometers tall and six hundred meters wide at its widest point.

Terrain. Areas inside the monolith tend to be smooth crystalline surfaces. Some areas have been reported to be made of rough soil, coal, and manufactured stone tiles. No accurate coordinates of these areas are available, though.

Doors. Most areas are connected by open tunnels, but main sections are separated by enormous doors of crystalline material. All doors feature strange runes and symbols on them which are known to provide the command word to open them magically. All command words are sections of a song in a foreign language. A successful DC 16 Intelligence (Arcana) check reveals the appropriate words to be sung.

Light. Most areas and tunnels inside the monolith are in complete darkness. Some areas of apparent importance are illuminated by a neutral light with no apparent source. Additionally, some chambers close to the edge of the monolith are dimly lit by sunlight that passes through the crystalline material of the monolith walls during the day.

Appearances. The monolith moves across planes every sixteen days at dawn. Any explorer still inside the monolith is transported with it if he does not vacate the place. The monolith cycles through hundreds of planes of existence until it restarts its journey all over again after nine years.