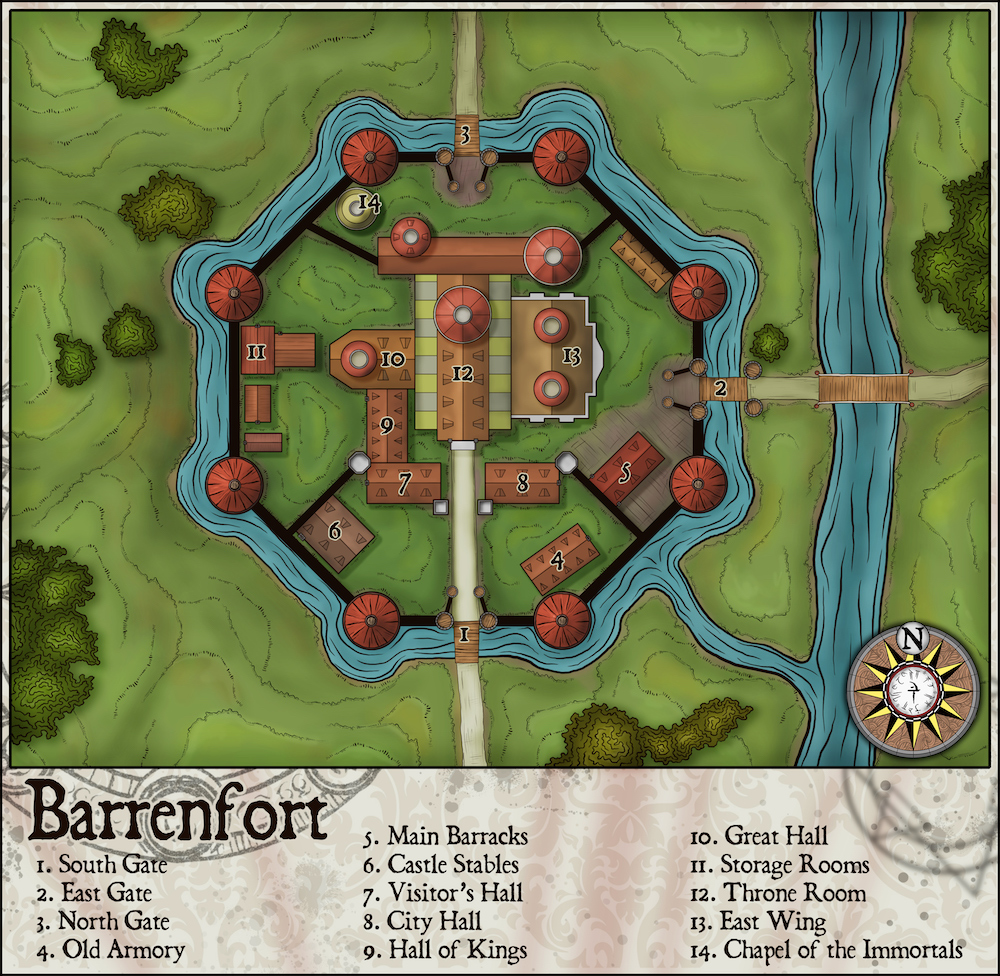 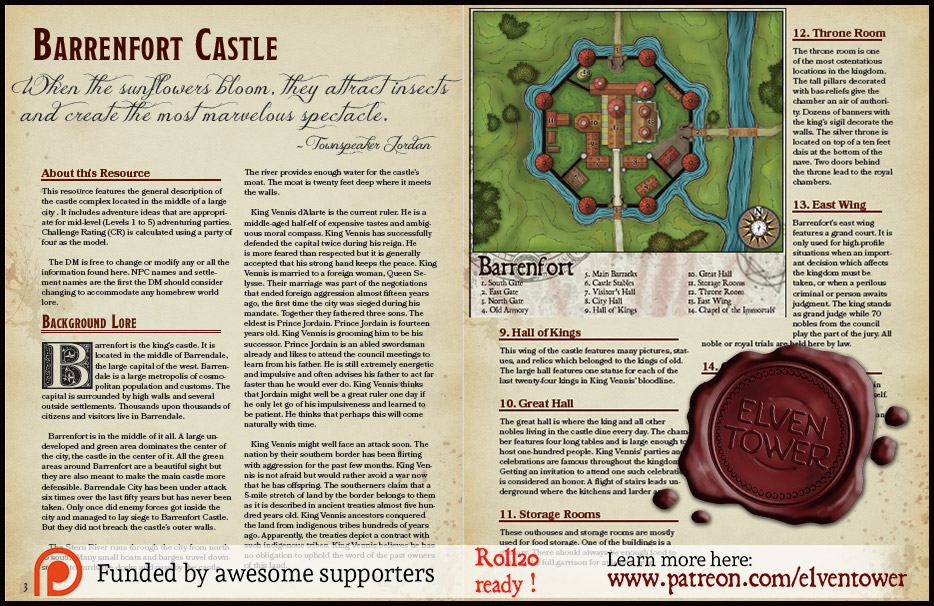 This resource features the general description of the castle complex located in the middle of a large city. It includes adventure ideas that are appropriate for mid-level (Levels 1 to 5) adventur­ing parties. Challenge Rating (CR) is calculated using a party of four as the model.

Barrenfort is the king’s castle. It is located in the middle of Barrendale, the large capital of the west. Barrendale is a large metropolis of cosmopolitan population and customs. The capital is surrounded by high walls and several outside settlements. Thousands upon thousands of citizens and visitors live in Barrendale.

Barrenfort is in the middle of it all. A large undeveloped and green area dominates the center of the city, the castle in the center of it. All the green areas around Barrenfort are a beautiful sight but they are also meant to make the main castle more defensible. Barrendale City has been under attack six times over the last fifty years but has never been taken. Only once did enemy forces got inside the city and managed to lay siege to Barrenfort Castle. But they did not breach the castle’s outer walls.

The Stern River runs through the city from north to south. Many small boats and barges travel downstream towards the docks and pass by the castle. The river provides enough water for the castle’s moat. The moat is twenty feet deep where it meets the walls.

King Vennis d’Alarte is the current ruler. He is a middle-aged half-elf of expensive tastes and ambiguous moral compass. King Vennis has successfully defended the capital twice during his reign. He is more feared than respected but it is generally accepted that his strong hand keeps the peace. King Vennis is married to a foreign woman, Queen Selysse. Their marriage was part of the negotiations that ended foreign aggression almost fifteen years ago, the first time the city was sieged during his mandate. Together they fathered three sons. The eldest is Prince Jordain. Prince Jordain is fourteen years old. King Vennis is grooming him to be his successor. Prince Jordain is an abled swordsman already and likes to attend the council meetings to learn from his father. He is still extremely energetic and impulsive and often advises his father to act far faster than he would ever do. King Vennis thinks that Jordain might well be a great ruler one day if he only let go of his impulsiveness and learned to be patient. He thinks that perhaps this will come naturally with time.

King Vennis might well face an attack soon. The nation by their southern border has been flirting with aggression for the past few months. King Vennis is not afraid but would rather avoid a war now that he has offspring. The southerners claim that a 5-mile stretch of land by the border belongs to them as it is described in ancient treaties almost five hundred years old. King Vennis ancestors conquered the land from indigenous tribes hundreds of years ago. Apparently, the treaties depict a contract with such indigenous tribes. King Vennis believes he has no obligation to uphold the word of the past owners of this land.

The north gate features a drawbridge and an internal iron bar portcullis. Four small sized watchtowers surround the area between the drawbridge and the portcullis. Commander Ronald Adreste is in charge of the gate. The internal portcullis was damaged recently and needs repairing. For the moment, this gate is less secure than the others.

The old armory is one of the oldest structures within the castle complex. It holds enough swords, spears, and crossbows for 250 soldiers. Master of Weapons Hon Fertin is in charge of the armory. The armory also features a workshop for the construction and repair of siege weapons like ballistae and trebuchets. A prototype model of a portable trebuchet is in the workshop now.

The main barracks building has enough space to house seventy soldiers. In times of peace, there are only fifty King’s guards garrisoned in this building. Lord Commander Julius Dante is the highest ranked officer in Barrenfort. He is in charge of the permanent force within the walls. He is also the only person with the authority to call forth the remaining soldiers from the city.

The stables have enough room for 24 horses but there are usually only twelve. These horses belong to the royal family and the high-ranking officers within the castle walls.

This external wing of the castle features sixteen living chambers for visitors and foreign dignitaries. Ten of these chambers are currently occupied by foreign advisors, the queen’s ladies-in-waiting, and other members of the nobility which often attend court. In times of war, important visitors are moved to the main castle and this area is used as additional barracks.

This building is just an extension of the city hall which has another main building in the city. It is used to host important meetings in which the king must be present. Otherwise, the building is empty most of the time. In times of war, this area is used as additional barracks.

This wing of the castle features many pictures, statues, and relics which belonged to the kings of old. The large hall features one statue for each of the last twenty-four kings in King Vennis’ bloodline.

The great hall is where the king and all other nobles living in the castle dine every day. The chamber features four long tables and is large enough to host one-hundred people. King Vennis’ parties and celebrations are famous throughout the kingdom. Getting an invitation to attend one such celebration is considered an honor. A flight of stairs leads underground where the kitchens and larder are.

These outhouses and storage rooms are mostly used for food storage. One of the buildings is a granary. There should always be enough food to sustain the full garrison for at least a year.

The throne room is one of the most ostentatious locations in the kingdom. The tall pillars decorated with bas-reliefs give the chamber an air of authority. Dozens of banners with the king’s sigil decorate the walls. The silver throne is located on top of a ten feet dais at the bottom of the nave. Two doors behind the throne lead to the royal chambers.

Barrenfort’s east wing features a grand court. It is only used for high-profile situations when an important decision which affects the kingdom must be taken, or when a perilous criminal or person awaits judgment. The king stands as grand judge while 70 nobles from the council play the part of the jury. All noble or royal trials are held here by law.

These are the general features of Barrenfort. It is located in the middle of undeveloped lands in the center of a large city.

Terrain. The lands around Barrenfort are grassy hills with few trees. A river runs through the city and provides water for the castle’s moat.

Walls. Barrenfort’s walls are sixty feet high. Eight watchtowers with large ballistae stand ready to defend the castle from any threat. There are three identical gates with two small watchtowers and two large watchtowers looking over them.

Garrison. The Kings’ Guard is a separate garrison of two hundred soldiers who protect the castle from any outside force. In times of peace, only fifty guards are stationed in the castle at any given time while the rest of the garrison serve in the main city. In difficult times, Area 7 and Area 8 are repurposed as extended barracks.