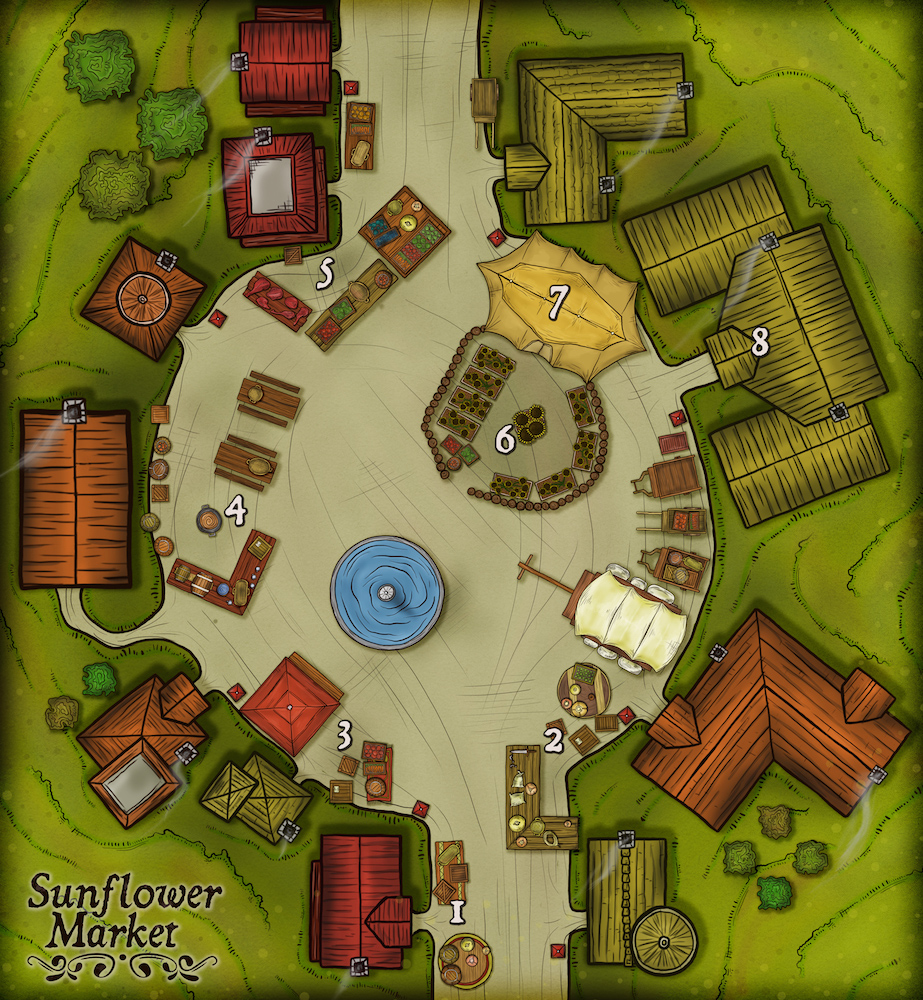 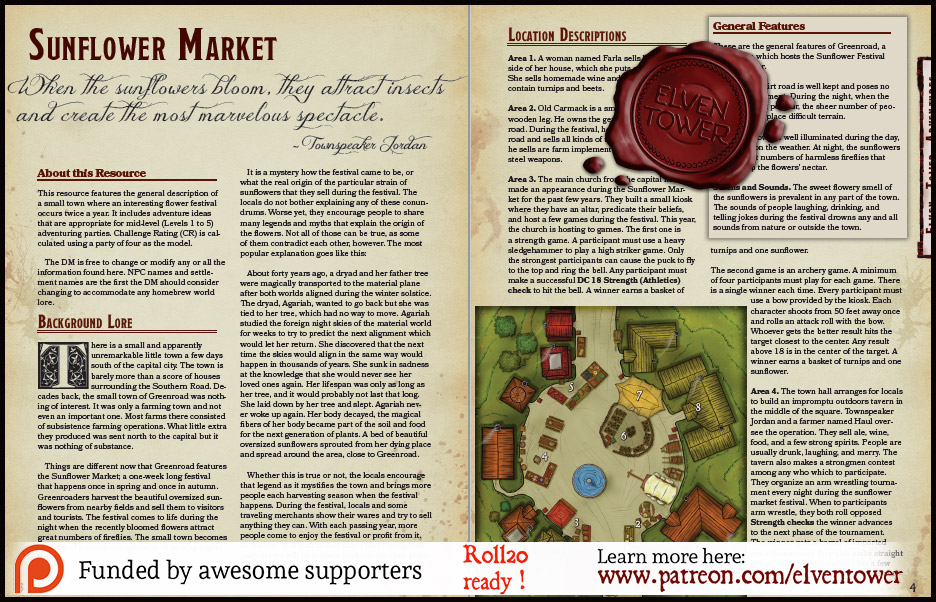 This resource features the general description of a small town where an interesting flower festival occurs twice a year. It includes adventure ideas that are appropriate for mid-level (Levels 1 to 5) adventur­ing parties. Challenge Rating (CR) is calculated using a party of four as the model.

There is a small and apparently unremarkable little town a few days south of the capital city. The town is barely more than a score of houses surrounding the Southern Road. Decades back, the small town of Greenroad was nothing of interest. It was only a farming town and not even an important one. Most farms there consisted of subsistence farming operations. What little extra they produced was sent north to the capital but it was nothing of substance.

Things are different now that Greenroad features the Sunflower Market; a one-week long festival that happens once in spring and once in autumn. Greenroaders harvest the beautiful oversized sunflowers from nearby fields and sell them to visitors and tourists. The festival comes to life during the night when the recently bloomed flowers attract great numbers of fireflies. The small town becomes the host of a wondrous spectacle of moving night lights.

It is a mystery how the festival came to be, or what the real origin of the particular strain of sunflowers that they sell during the festival. The locals do not bother explaining any of these conundrums. Worse yet, they encourage people to share many legends and myths that explain the origin of the flowers. Not all of those can be true, as some of them contradict each other, however. The most popular explanation goes like this:

About forty years ago, a dryad and her father tree were magically transported to the material plane after both worlds aligned during the winter solstice. The dryad, Agariah, wanted to go back but she was tied to her tree, which had no way to move. Agariah studied the foreign night skies of the material world for weeks to try to predict the next alignment which would let her return. She discovered that the next time the skies would align in the same way would happen in thousands of years. She sunk in sadness at the knowledge that she would never see her loved ones again. Her lifespan was only as long as her tree, and it would probably not last that long. She laid down by her tree and slept. Agariah never woke up again. Her body decayed, the magical fibers of her body became part of the soil and food for the next generation of plants. A bed of beautiful oversized sunflowers sprouted from her dying place and spread around the area, close to Greenroad.

Whether this is true or not, the locals encourage that legend as it mystifies the town and brings more people each harvesting season when the festival happens. During the festival, locals and some traveling merchants show their wares and try to sell anything they can. With each passing year, more people come to enjoy the festival or profit from it. Nowadays, it is guaranteed that a performing company or two will be present to showcase their plays and musical talents.

Area 1. A woman named Farla sells her wares outside of her house, which she puts on two carpets. She sells homemade wine and ales. The crates contain turnips and beets.

Area 2. Old Carmack is a smiling old man with a wooden leg. He owns the general store of Greenroad. During the festival, he moves a table to the road and sells all kinds of things. Most of the stuff he sells are farm implements, fertilizer, and a few steel weapons.

Area 3. The main church from the capital has made an appearance during the Sunflower Market for the past few years. They built a small kiosk where they have an altar, predicate their beliefs, and host a few games during the festival. This year, the church is hosting to games. The first one is a strength game. A participant must use a heavy sledgehammer to play a high striker game. Only the strongest participants can cause the puck to fly to the top and ring the bell. Any participant must make a successful DC 18 Strength (Athletics) check to hit the bell. A winner earns a basket of turnips and one sunflower.

The second game is an archery game. A minimum of four participants must play for each game. There is a single winner each time. Every participant must use a bow provided by the kiosk. Each character shoots from 50 feet away once and rolls an attack roll with the bow. Whoever gets the better result hits the target closest to the center. Any result above 18 is in the center of the target. A winner earns a basket of turnips and one sunflower.

Area 4. The town hall arranges for locals to build an impromptu outdoors tavern in the middle of the square. Townspeaker Jordan and a farmer named Haul oversee the operation. They sell ale, wine, food, and a few strong spirits. People are usually drunk, laughing, and merry. The tavern also makes a strongmen contest among any who which to participate. They organize an arm wrestling tournament every night during the sunflower market festival. When to participants arm wrestle, they both roll opposed Strength checks the winner advances to the next phase of the tournament. The winner gets a barrel of imported wine. Sometimes they also make straight wrestling competitions but after a few brawls, they stopped sporting this event in particular.

Area 5. The farmer’s market is a staple during the sunflower market festival. Local farmers sell all kinds of produce, products of animal origin and meat. They also arrange livestock sales but the actual animals are seldom present during the festival.

Area 6. Dominating the middle of the square, dedicated harvesters sell the actual sunflowers that make the town so famous. They sell single flowers, seeds, floral arrangements, and potted sunflowers. As expected the flowers are marked up for the festival, they are slightly more expensive than meat. Any living sunflower moved away from Greenroad and taken care of correctly can survive a long time. The retain their magical qualities and attract fireflies even in the cities, though in small quantities.

The farmers claim that the sunflowers’ magical qualities make them good for medicinal purposes. They sell potions of healing made from the flower cores. The potions are slightly more potent than normal herbal potions. These potions cure 2d4+4 hit points.

Area 7. Sunflower harvesters put a tent behind the flower stalls. Inside the tent, they teach other people how to plant and care for the flowers. The seeds are not magical so if a sunflower is planted away from Greenroad, it will not be affected by the local magic in the soil. There is a competition for the most beautiful flower arrangement each day too. Participants are given a pot, flowers, ribbons, and other utensils. Townspeaker Jordan chooses the winner every time. Any participant must roll a DC 15 Dexterity check or a DC 15 Wisdom (Nature) check to create a floral arrangement. Whoever gets the highest result in this check has created the most beautiful arrangement. The winner gets a pack of sunflower seeds, a potted sunflower, and any proceeds if the arrangement is sold by a tourist.

Area 8. Greenroad’s town hall is the largest building. The town hall becomes an improvised inn during the festival. The town is small enough that no one has created any kind of lodging place for visitors yet. Townspeaker Jordan loves the festival and has no problem fixing any problem the visitors do to the hall during each festival. Space is limited and not everyone will find a place to stay in the hall. Due to the high demand each passing festival, Townspeaker Jordan started doing auctions for any potential clients. Anyone who wishes to stay in the hall must bid for it. At the end of the day, only the highest bids will get a room or space to lodge. Last year, the highest a person paid for a private room was 10 gp for a single night.

These are the general features of Greenroad, a small town which hosts the Sunflower Festival twice per year.

Terrain. The dirt road is well kept and poses no threat to movement. During the night, when the festival is most popular, the sheer number of people makes the place difficult terrain.

Light. The town is well illuminated during the day, depending on the weather. At night, the sunflowers attract great numbers of harmless fireflies that come to sip the flowers’ nectar.

Smells and Sounds. The sweet flowery smell of the sunflowers is prevalent in any part of the town. The sounds of people laughing, drinking, and telling jokes during the festival drowns any and all sounds from nature or outside the town.