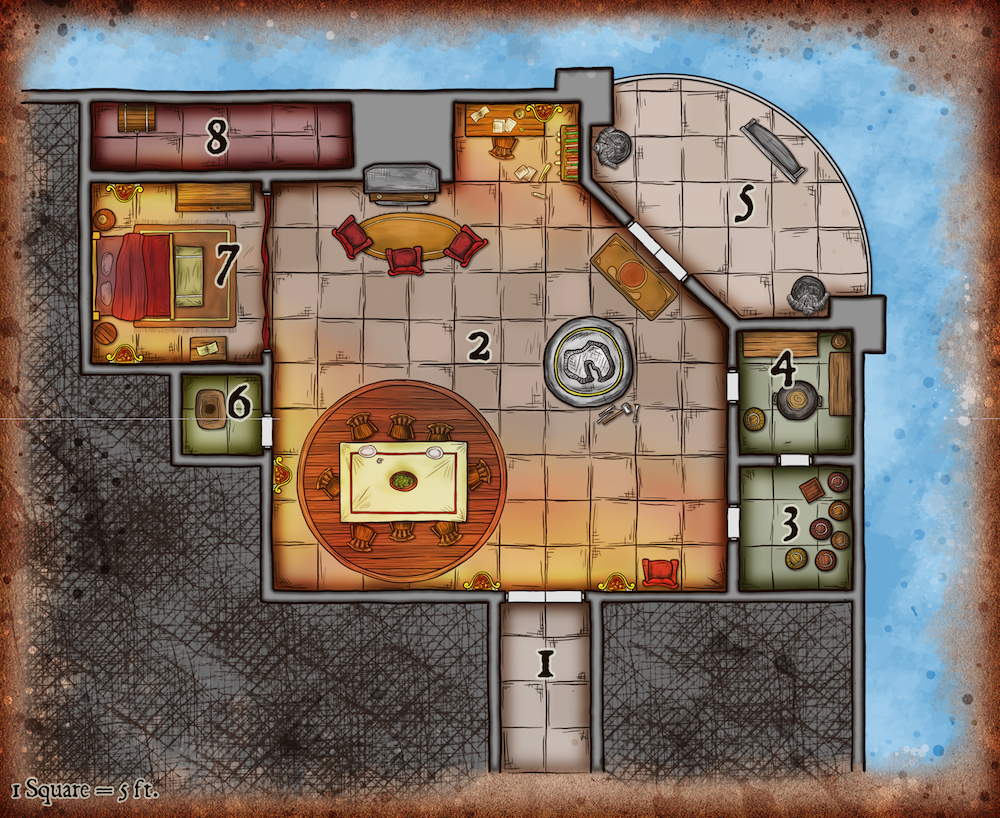 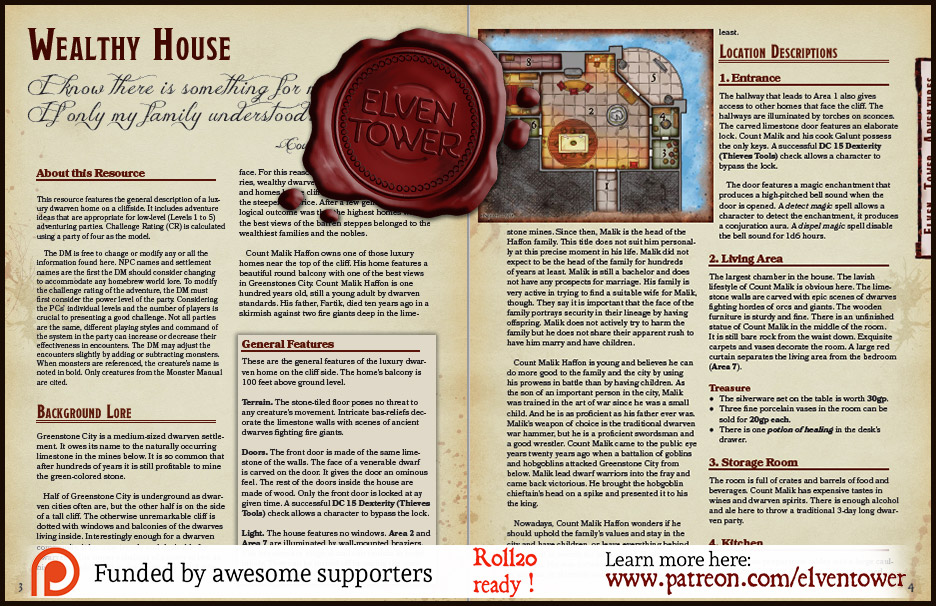 This resource features the general description of a luxury dwarven home on a cliffside. It includes adventure ideas that are appropriate for low-level (Levels 1 to 5) adventur­ing parties. Challenge Rating (CR) is calculated using a party of four as the model.

The DM is free to change or modify any or all the information found here. NPC names and settlement names are the first the DM should consider changing to accommodate any homebrew world lore. To modify the challenge rating of the adventure, the DM must first con­sider the power level of the party. Considering the PCs’ individual levels and the number of players is crucial to presenting a good challenge. Not all parties are the same, different playing styles and command of the system in the party can increase or decrease their effectiveness in en­counters. The DM may adjust the encounters slightly by adding or subtracting monsters. When monsters are referenced, the creature’s name is noted in bold. Only creatures from the Monster Manual are cited.

Greenstone City is a medium-sized dwarven settlement. It owes its name to the naturally occurring limestone in the mines below. It is so common that after hundreds of years it is still profitable to mine the green-colored stone.

Half of Greenstone City is underground as dwarven cities often are, but the other half is on the side of a tall cliff. The otherwise unremarkable cliff is dotted with windows and balconies of the dwarves living inside. Interestingly enough for a dwarven community, it became trendy and desirable for dwarves of the upper echelons of society to live as high as possible, within the limits of the cliff side face. For this reason alone, over the course of centuries, wealthy dwarves bought the best locations and homes by the cliff side. The higher they were, the steeper the price. After a few generations, the logical outcome was that the highest homes with the best views of the barren steppes belonged to the wealthiest families and the nobles.

Count Malik Haffon owns one of those luxury homes near the top of the cliff. His home features a beautiful round balcony with one of the best views in Greenstones City. Count Malik Haffon is one hundred years old, still a young adult by dwarven standards. His father, Fartik, died ten years ago in a skirmish against two fire giants deep in the limestone mines. Since then, Malik is the head of the Haffon family. This title does not suit him personally at this precise moment in his life. Malik did not expect to be the head of the family for hundreds of years at least. Malik is still a bachelor and does not have any prospects for marriage. His family is very active in trying to find a suitable wife for Malik, though. They say it is important that the face of the family portrays security in their lineage by having offspring. Malik does not actively try to harm the family but he does not share their apparent rush to have him marry and have children.

Count Malik Haffon is young and believes he can do more good to the family and the city by using his prowess in battle than by having children. As the son of an important person in the city, Malik was trained in the art of war since he was a small child. And he is as proficient as his father ever was. Malik’s weapon of choice is the traditional dwarven war hammer, but he is a proficient swordsman and a good wrestler. Count Malik came to the public eye years twenty years ago when a battalion of goblins and hobgoblins attacked Greenstone City from below. Malik lead dwarf warriors into the fray and came back victorious. He brought the hobgoblin chieftain’s head on a spike and presented it to his the king.

Nowadays, Count Malik Haffon wonders if he should uphold the family’s values and stay in the city and have children, or leave everything behind and go out in search for adventures. Both options scare him. He was forbidden from participating in any war or skirmish until he had a male son at least.

The hallway that leads to Area 1 also gives access to other homes that face the cliff. The hallways are illuminated by torches on sconces. The carved limestone door features an elaborate lock. Count Malik and his cook Galunt possess the only keys. A successful DC 15 Dexterity (Thieves Tools) check allows a character to bypass the lock.

The largest chamber in the house. The lavish lifestyle of Count Malik is obvious here. The limestone walls are carved with epic scenes of dwarves fighting hordes of orcs and giants. The wooden furniture is sturdy and fine. There is an unfinished statue of Count Malik in the middle of the room. It is still bare rock from the waist down. Exquisite carpets and vases decorate the room. A large red curtain separates the living area from the bedroom (Area 7).

The room is full of crates and barrels of food and beverages. Count Malik has expensive tastes in wines and dwarven spirits. There is enough alcohol and ale here to throw a traditional 3-day long dwarven party.

There are two preparation tables and a large cauldron in the middle of the room. A dwarf named Galunt comes twice a day to prepare food for the count. Galunt has the only other copy of the front door key. Galunt is loyal to Malik and a surprisingly proficient warrior too.

The view from the balcony is breathtaking. Kilometers of barren steppes are visible to the south of the city. Two statues of dwarven warriors stand close to the double wooden doors. The statues protect the house from any would-be intruders who come from the balcony. They animate and attack any trespassers. The statues follow any intruders into the house but will not leave cross the front door. (Use the gargoyle statblock or the stone golem statblock for higher difficulty)

There is a porcelain latrine hole on the floor of this chamber. The latrine goes down the complicated sewers system of the city. Many normal sized cockroaches escape down the latrine as soon as the door is opened.

The master bedroom features a large bed with fine bed linens. There is a chest by the bed foot with clothes and animal skins inside. The wardrobe next to the north wall contains Count Malik’s clothes and capes.

A successful DC 16 Intelligence (Investigation) check allows a character to find a fake brick on the north wall that activates a secret door. The door leads to Area 8.

The chest contains some valuables that belong to Count Malik.

These are the general features of the luxury dwarven home on the cliff side. The home’s balcony is 100 feet above ground level.

Doors. The front door is made of the same limestone of the walls. The face of a venerable dwarf is carved on the door. It gives the door an ominous feel. The rest of the doors inside the house are made of wood. Only the front door is locked at ay given time. A successful DC 15 Dexterity (Thieves Tools) check allows a character to bypass the lock.

Light. The house features no windows. Area 2 and Area 7 are illuminated by wall-mounted braziers. The braziers are magical and can remain lit indefinitely. They can be turned off by saying the command word: “Galik Fraun”.