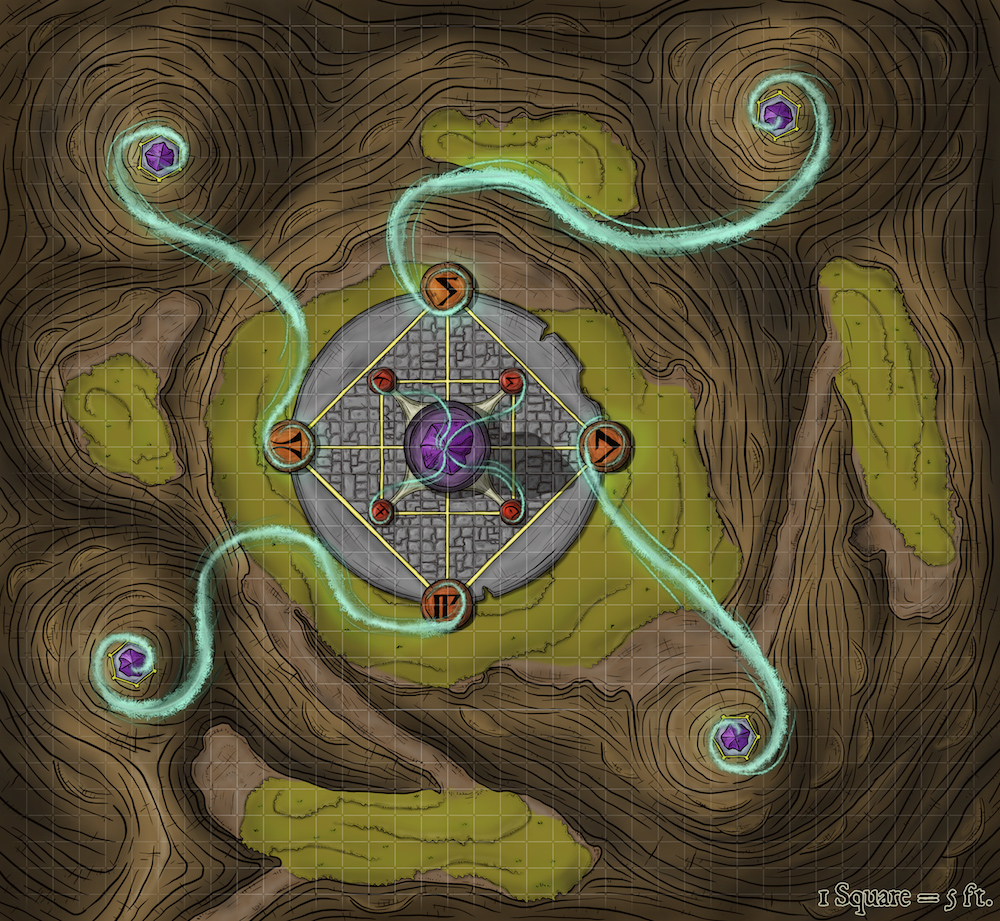 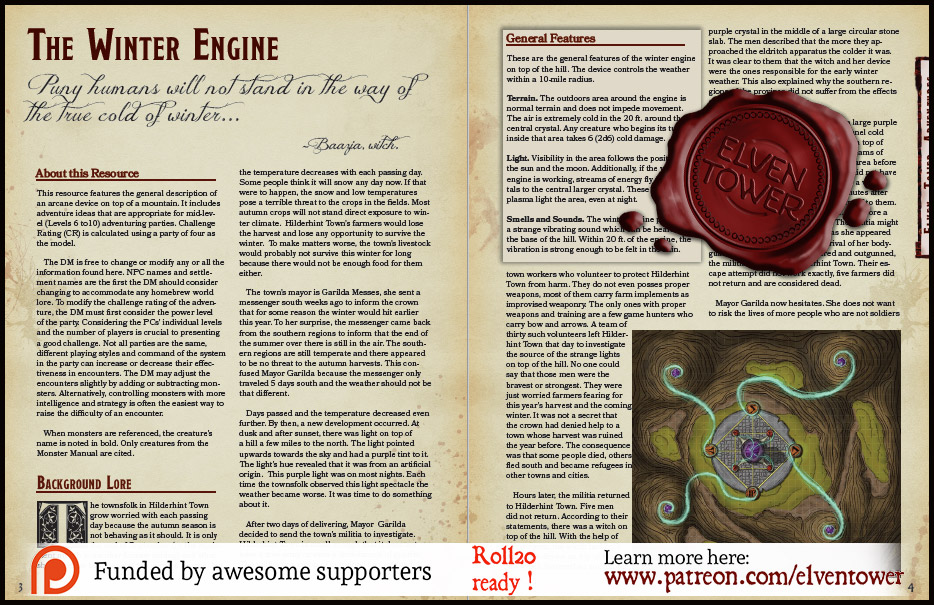 This resource features the general description of an arcane device on top of a mountain. It includes adventure ideas that are appropriate for mid-level (Levels 6 to10) adventur­ing parties. Challenge Rating (CR) is calculated using a party of four as the model.

The townsfolk in Hilderhint Town grow worried with each passing day because the autumn season is not behaving as it should. It is only the end of September (or the equivalent month in another fantasy setting) and what should be the beginning of the autumn season, but the temperature decreases with each passing day. Some people think it will snow any day now. If that were to happen, the snow and low temperatures pose a terrible threat to the crops in the fields. Most autumn crops will not stand direct exposure to winter climate. Hilderhint Town’s farmers would lose the harvest and lose any opportunity to survive the winter. To make matters worse, the town’s livestock would probably not survive this winter for long because there would not be enough food for them either.

The town’s mayor is Garilda Messes, she sent a messenger south weeks ago to inform the crown that for some reason the winter would hit earlier this year. To her surprise, the messenger came back from the southern regions to inform that the end of the summer over there is still in the air. The southern regions are still temperate and there appeared to be no threat to the autumn harvests. This confused Mayor Garilda because the messenger only traveled 5 days south and the weather should not be that different.

Days passed and the temperature decreased even further. By then, a new development occurred. At dusk and after sunset, there was light on top of a hill a few miles to the north. The light pointed upwards towards the sky and had a purple tint to it. The light’s hue revealed that it was from an artificial origin. This purple light was on most nights. Each time the townsfolk observed this light spectacle the weather became worse. It was time to do something about it.

After two days of delivering, Mayor Garilda decided to send the town’s militia to investigate. Hilderhint Town is small enough that it does not have a true army or even a detachment of guards. The militia is a group of untrained farmers and town workers who volunteer to protect Hilderhint Town from harm. They do not even posses proper weapons, most of them carry farm implements as improvised weaponry. The only ones with proper weapons and training are a few game hunters who carry bow and arrows. A team of thirty such volunteers left Hilderhint Town that day to investigate the source of the strange lights on top of the hill. No one could say that those men were the bravest or strongest. They were just worried farmers fearing for this year’s harvest and the coming winter. It was not a secret that the crown had denied help to a town whose harvest was ruined the year before. The consequence was that some people died, others fled south and became refugees in other towns and cities.

Hours later, the militia returned to Hilderhint Town. Five men did not return. According to their statements, there was a witch on top of the hill. With the help of a few ogres, the witch had built a strange device on top of the hill which featured an enormous purple crystal in the middle of a large circular stone slab. The men described that the more they approached the eldritch apparatus the colder it was. It was clear to them that the witch and her device were the ones responsible for the early winter weather. This also explained why the southern regions of the province did not suffer from the effects of the witch’s arcane device.

The militia described the device as a large purple crystal which appeared to store or channel cold energy. Four smaller crystals were set on top of small peaks. These crystals produced beams of bright light that meandered around the area before reaching the central stone. The militia did not have enough time to investigate or figure out a way to stop the thing from working. A few minutes after they arrived, a terrible hag showed herself to them. She was ugly and old in appearance. The wore a white robe and two blue earrings. The militia might have confronted the hag, terrible as she appeared to be if it had not been for the arrival of her bodyguards, three ogres. Outnumbered and outgunned, the militia fled back to Hilderhint Town. Their escape attempt did not work exactly, five farmers did not return and are considered dead.

Mayor Garilda now hesitates. She does not want to risk the lives of more people who are not soldiers by choice. The militia has its uses, but this situation went beyond their utility. She sent a messenger south to request help from the crown but she is not expecting much from them. The town’s coffers still have some gold in them which can be used to offer a bounty on the witch’s head. Mayor Garilda set the bounty to six hundred gold pieces to the brave warrior(s) who bring back that witch’s head and destroy her device.

The witch’s name is Baazia (green hag, level 5 spellcaster with wizard spells) she designed the arcane contraption. When turned on, energy flows from the outer crystals to the middle one, absorbing heat and vitality from the air, cooling the climate. She is joined by 3 ogres: Ogg, Maku, and Fab. They follow the witch because they fear her and because she provides food and shelter for them. They’ve been with her for almost a year now. So far, she has not let them down. The three ogres are wearing thick winter clothes appropriate for the harshest climates. They patrol the hill often, under Baazia’s commands. When they find a straggler or unwanted visitor, they bring them to Baazia. Her normal attitude is to kill any prisoner and cook them.

Baazia knows there is a small town close to the hill she now claims as her “realm”. She is confident it will not pose any threat to her command of the area, especially after the meager militia they sent was not even brave enough to face her ogres. It does not matter much because the power of her artificial winter will drive them south anyway in a matter of weeks. Her endgame is to create a zone of permanent winter centered on the hill, where she plans to build an ice fort. The range of her device is a 10-mile radius.

These are the general features of the winter engine on top of the hill. The device controls the weather within a 10-mile radius.

Terrain. The outdoors area around the engine is normal terrain and does not impede movement. The air is extremely cold in the 20 ft. around the central crystal. Any creature who begins its turn inside that area takes 6 (2d6) cold damage.

Light. Visibility in the area follows the position of the sun and the moon. Additionally, if the winter engine is working, streams of energy fly from crystals to the central larger crystal. These streams of plasma light the area, even at night.

Smells and Sounds. The winter engine produces a strange vibrating sound which can be heard at the base of the hill. Within 20 ft. of the engine, the vibration is strong enough to be felt in the skin. 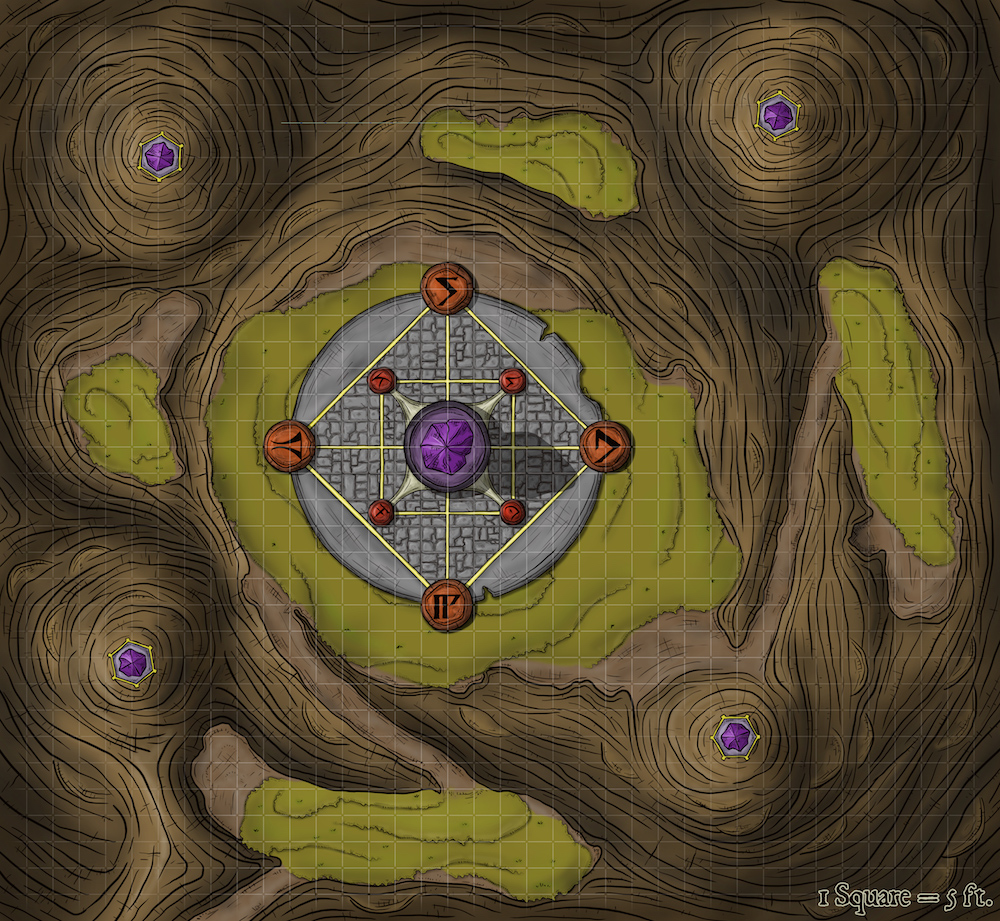