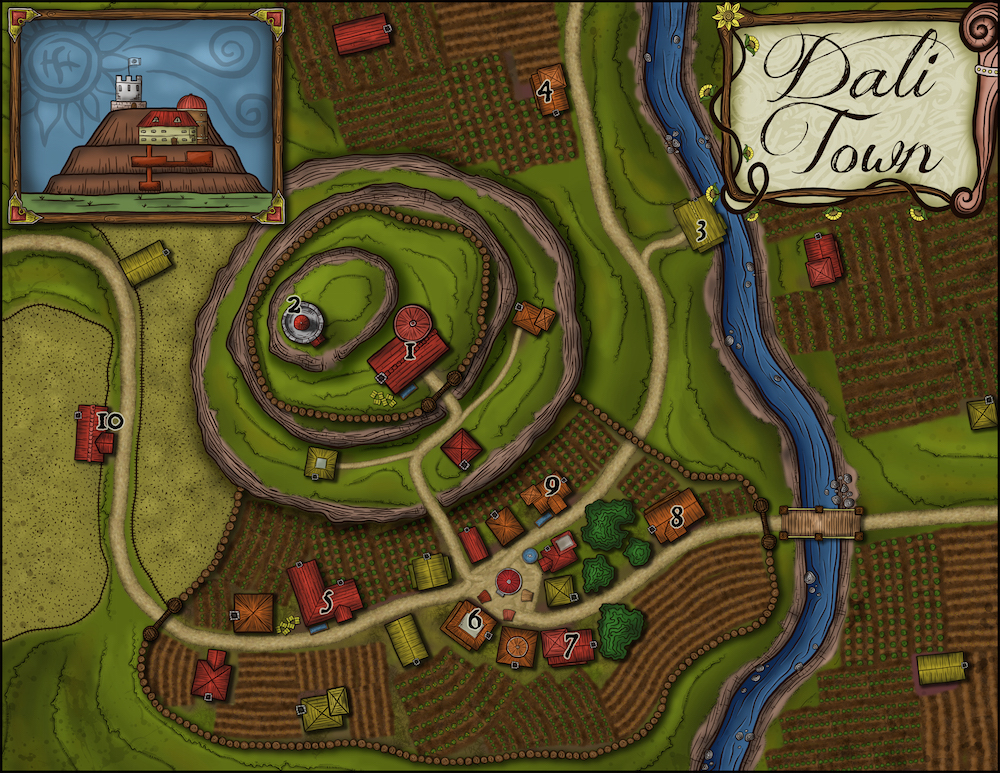 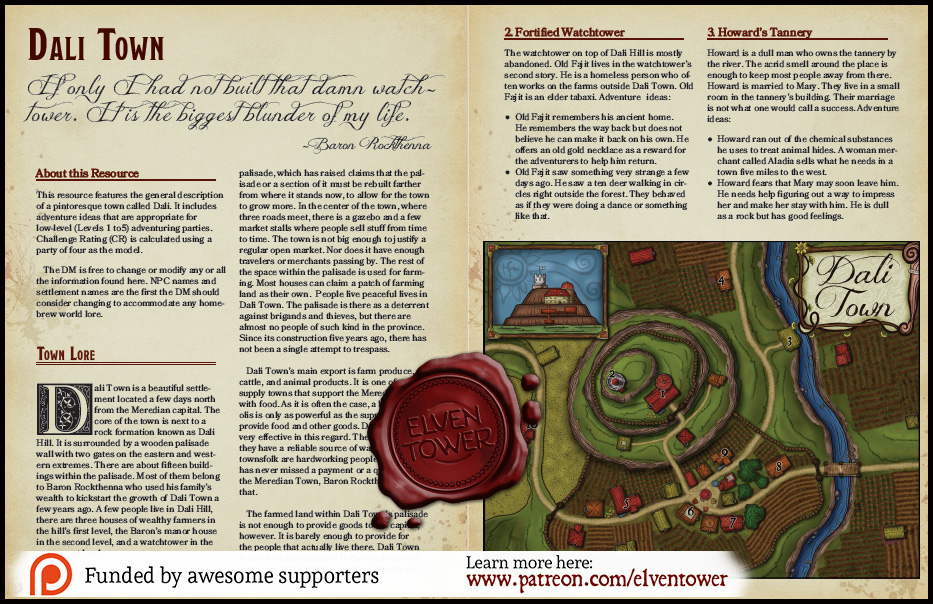 This resource features the general description of a pintoresque town called Dali. It includes adventure ideas that are appropriate for low-level (Levels 1 to5) adventur­ing parties. Challenge Rating (CR) is calculated using a party of four as the model.

Dali Town is a beautiful settlement located a few days north from the Meredian capital. The core of the town is next to a rock formation known as Dali Hill. It is surrounded by a wooden palisade wall with two gates on the eastern and western extremes. There are about fifteen buildings within the palisade. Most of them belong to Baron Rockthenna who used his family’s wealth to kickstart the growth of Dali Town a few years ago. A few people live in Dali Hill, there are three houses of wealthy farmers in the hill’s first level, the Baron’s manor house in the second level, and a watchtower in the uppermost level.

There is no free space available within the palisade, which has raised claims that the palisade or a section of it must be rebuilt farther from where it stands now, to allow for the town to grow more. In the center of the town, where three roads meet, there is a gazebo and a few market stalls where people sell stuff from time to time. The town is not big enough to justify a regular open market. Nor does it have enough travelers or merchants passing by. The rest of the space within the palisade is used for farming. Most houses can claim a patch of farming land as their own. People live peaceful lives in Dali Town. The palisade is there as a deterrent against brigands and thieves, but there are almost no people of such kind in the province. Since its construction five years ago, there has not been a single attempt to trespass.

Dali Town’s main export is farm produce, cattle, and animal products. It is one of many supply towns that support the Meredian capital with food. As it is often the case, a big metropolis is only as powerful as the supply lines that provide food and other goods. Dali Town is very effective in this regard. The soil is fertile, they have a reliable source of water, and the townsfolk are hardworking people. Dali Town has never missed a payment or a quota from the Meredian Town, Baron Rockthenna sees to that.

The farmed land within Dali Town’s palisade is not enough to provide goods to the capital, however. It is barely enough to provide for the people that actually live there. Dali Town is small when compared to the whole farmed area around it. Only the wealthy farmers and merchants can afford to live within the palisade. The rest live outside by their farms and plantations. The population of Dali Town that lives outside the town proper is five times larger than within the palisade. Most of them are humble laborers, farmers, and loggers. The town is surrounded by farmlands and a few logging camps. Most of Dali Town’s produce comes from the farms outside.

In case of emergency, the farmers in the region know that they can always flee back to Dali Town and find a safe haven for them to stay. If the town proper where under attack, all the common folk would flee uphill to Baron Rockthenna’s manor house or the watchtower on top of the hill. Those are the only two defensible positions in Dali Town.

Baron Rockthenna is the man in charge of Dali Town. The town already existed when he arrived at the region. “Town”, however, is too big a definition for what Baron Rockthenna found here. There were less than 5 buildings and most people lived in the open, by the plantations. It was a disorganized group of houses and farms spread out thin across miles. Baron Rockthenna arrived and commissioning the construction of a palisade wall was his first edict.He argued that Dali Town should have a centralized location where government, wealthy farmers and merchants, and Dali citizens would be able to dictate the future of the community. The size of the palisade was underestimated, buildings and farms took over the little available space within the year. Baron Rockthenna, for some reason, believed that Dali Town would become a place of interest in the region. He commissioned the expensive construction of a fortified tower on the summit of Dali Hill. So far, the tower has deterred zero threats, it has never been attacked, and it does not have a permanent garrison. This has been, by far, Baron Rockthenna most expensive mistake. Despite this, it gives the townsfolk a sense of ease and protection the fact that such fortified building is at their disposal, should there ever be a need for it.

Baron Rockthenna lives here with his wife Baroness Addy, and his two sons. Baron Rockthenna strives to increase the town’s production and overall value because he is indebted to the Meredian crown. The town did not grow as fast as he wrongly predicted. And he also built the expensive tower which has brought no value whatsoever to Dali Town. Baron Rockthenna built a family crypt beneath the manor house and dungeons. No one has visited these areas of the manor house except the baron and his close allies. Adventure ideas:

The watchtower on top of Dali Hill is mostly abandoned. Old Fajit lives in the watchtower’s second story. He is a homeless person who often works on the farms outside Dali Town. Old Fajit is an elder tabaxi. Adventure ideas:

Howard is a dull man who owns the tannery by the river. The acrid smell around the place is enough to keep most people away from there. Howard is married to Mary. They live in a small room in the tannery’s building. Their marriage is not what one would call a success. Adventure ideas:

Danna is a middle-aged gnome farmer whose farm is right outside of Dali Town, by the north road. She grows turnips and tomatoes all year round. Adventure ideas:

Nellie is an overweight woman who owns the only inn in Dali Town. Not much of an inn because all it has is a common room with cots and beds. But at least it is warm and has a roof over your head. Nellie also brews her own ale which is bitter, bad, but strong. Adventure ideas:

The mercantile office in Dali Town is a general store. They buy and sell all kinds of common goods. They also schedule the different shipments to the Meredian capital throughout the year. It is also known that the Meredian Mercantile directly represents the will of the Meredian crown. They oversee the town’s production, collect taxes, and collect the interests from Baron Rockthenna’s debt to the crown. Adventure ideas:

Dionysius is an old man. Rumor has it that he used to be an adventurer/researcher who traveled the world in search of interesting ingredients and components for his brews and potions. He is versed in medicine and the creation of alchemical treatments for wounds and ailments. Dionysius is so frail these days that a young boy named Gurha assists him in all he does. Gurha does not have the theoretical knowledge Dionysius has, but he has become just a good an alchemist and brewer. Adventure ideas:

The general store opposes Meredian Mercantile directly. They do the same and sell pretty much the same stuff. The only difference is that The general store does not represent the crown’s interests. Gobbard Hall owns the store. Two years ago, Gobbard thought it would be a good thing to offer something more to compete with Meredian Mercantile. He started brewing ale and sweet wine. He stroke a deal with some farmers and now buys the ingredients for a good price. Adventure ideas:

Sir Balboon is a retired knight who spent most of his life serving directly for the Meredian Crown. He was part of the royal guard for ten years. After retiring, he was granted a lot of land inside Dali Town. He grows his own food and sometimes sells the rest. Though he is retired, he teaches swordsmanship to a few young boys in Dali Town. He has eight pupils. Adventure ideas:

Kikka is a middle-aged woman who owns a big cattle farm just west of Dali Town. She has a great number of goats and cows. She is, by far, the richest farmer in Dali Town. She also owns a house on the first level of Dali Hill, just below the manor house. Adventure ideas:

These are the general features of Dali Town. It is located next to the Emerald River and surrounded by farms.

Terrain. The soil in the general area where Dali Town is located is fertile. The province is temperate and the winter is not particularly harsh.

Smells and Sounds. The scent of greenery, produce and wet soil is prevalent in Dali Town and the surrounding areas. The place is quiet and calm for the most part.

Government. The town is ruled by a Baron whose family lives in the Manor House on top of Dali Hill. (Area 1) The Baron owes fealty to the Meredian crown.