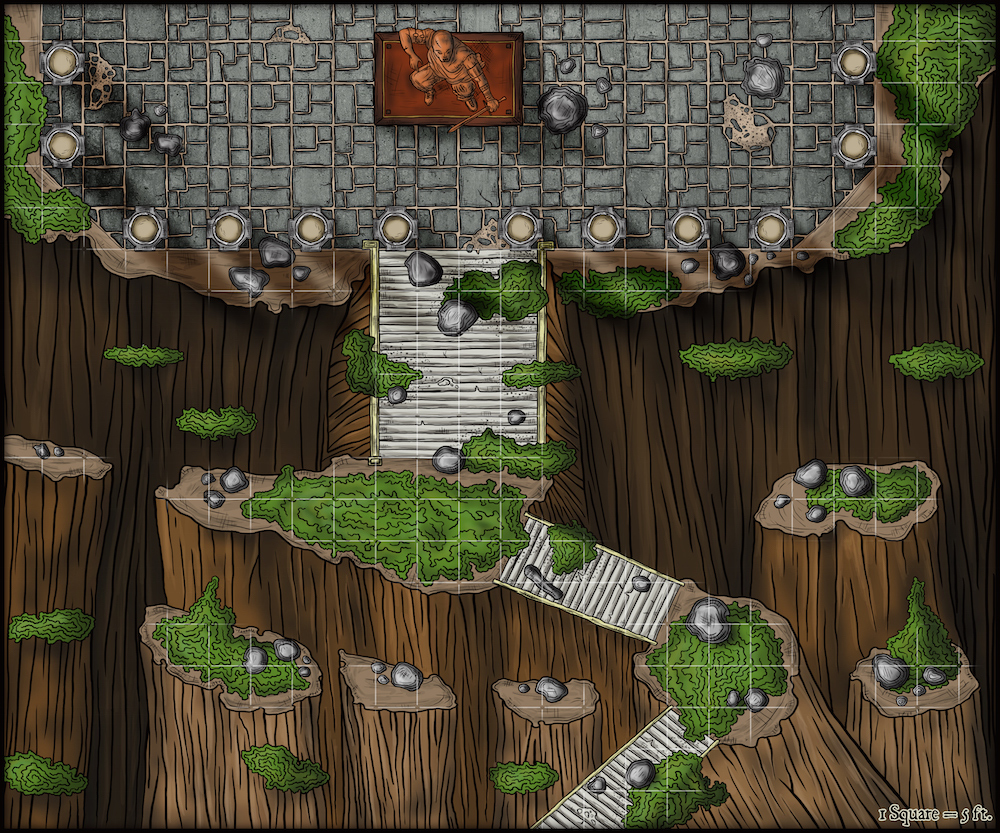 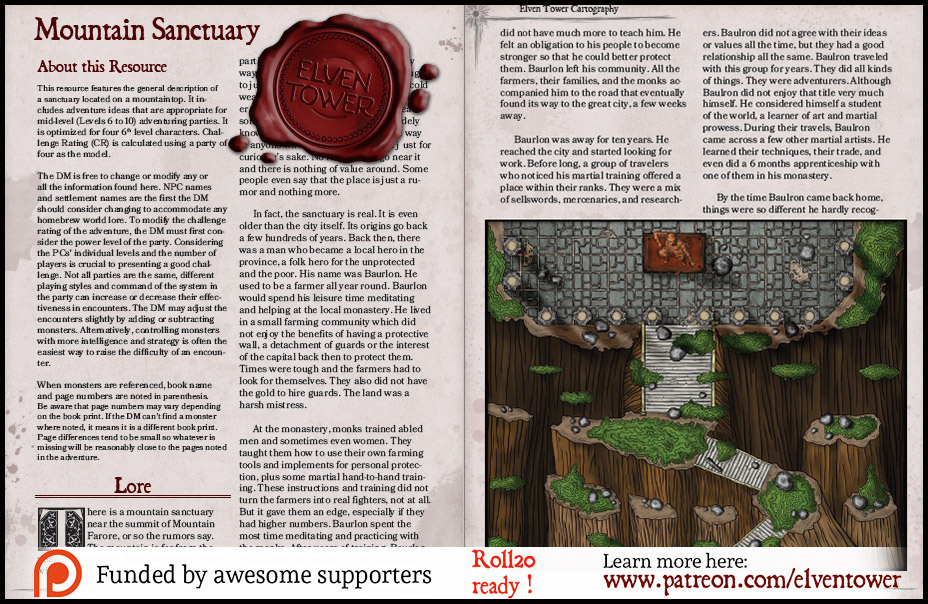 This resource features the general description of a sanctuary located on a mountaintop. It includes adventure ideas that are appropriate for mid-level (Levels 6 to10) adventur­ing parties. It is optimized for four 6th level characters. Challenge Rating (CR) is calculated using a party of four as the model.

There is a mountain sanctuary near the summit of Mountain Farore, or so the rumors say. The mountain is far from the nearest settlement. About two weeks away, with good weather, that is. The trip is not particularly dangerous or difficult in any way. The mountain itself is not tall enough to justify the use of special clothing for cold weather. If anything, it is windy and colder than a rainy night in the city. The reason why the sanctuary is not more widely known is that its location is out of the way of anyone who would wish to visit it just for curiosity’s sake. No trade roads go near it and there is nothing of value around. Some people even say that the place is just a rumor and nothing more.

In fact, the sanctuary is real. It is even older than the city itself. Its origins go back a few hundreds of years. Back then, there was a man who became a local hero in the province, a folk hero for the unprotected and the poor. His name was Baurlon. He used to be a farmer all year round. Baurlon would spend his leisure time meditating and helping at the local monastery. He lived in a small farming community which did not enjoy the benefits of having a protective wall, a detachment of guards or the interest of the capital back then to protect them. Times were tough and the farmers had to look for themselves. They also did not have the gold to hire guards. The land was a harsh mistress.

At the monastery, monks trained abled men and sometimes even women. They taught them how to use their own farming tools and implements for personal protection, plus some martial hand-to-hand training. These instructions and training did not turn the farmers into real fighters, not at all. But it gave them an edge, especially if they had higher numbers. Baurlon spent the most time meditating and practicing with the monks. After years of training, Baurlon decided that the monks at the monastery did not have much more to teach him. He felt an obligation to his people to become stronger so that he could better protect them. Baurlon left his community. All the farmers, their families, and the monks accompanied him to the road that eventually found its way to the great city, a few weeks away.

Baurlon was away for ten years. He reached the city and started looking for work. Before long, a group of travelers who noticed his martial training offered a place within their ranks. They were a mix of sellswords, mercenaries, and researchers. Baulron did not agree with their ideas or values all the time, but they had a good relationship all the same. Baulron traveled with this group for years. They did all kinds of things. They were adventurers. Although Baulron did not enjoy that title very much himself. He considered himself a student of the world, a learner of art and martial prowess. During their travels, Baulron came across a few other martial artists. He learned their techniques, their trade, and even did a 6 months apprenticeship with one of them in his monastery.

By the time Baulron came back home, things were so different he hardly recognized the place. The farming community had grown immensely during those long years. It was now a small town. It was thanks to the discovery of a silver mine located near the north side of the town. Baulron came back in good time. Because of the increased value of the town due to the silver mine, the place was now a target for brigands and thieves. Baulron successfully defended the town against all kinds of threats for years. His martial abilities were far superior to anyone else’s in town.

Baulron also came back to the monastery to help as if no time had passed at all. The monks tried to offer him a high position in their religious hierarchy but Baulron refused. He was an acolyte before he left and he would be an acolyte now. He agreed to become a teacher and helped training the other students and monks.

A decade later, the town continued growing and became a small city. Now it had a stone wall and proper gates. There was also a well-trained group of guards and soldiers. The services of the monastery and their farmer’s militia became redundant and inferior to the current protective measures. Baulron saw that his usefulness to the city grew smaller and smaller. He did not resent that. He understood that the cycle of life is exactly that, a cycle. And now it was time to continue his way. His meditation was now on a different level. After decades of meditating, he found that there was a door to body and mind perfection. The city was too loud for him to achieve the level of concentration he needed.

He moved away once more. But now he knew what his path was. He brought a group of disciples with him to the summit of a mountain and they built a sanctuary there. Baulron continued his training and that of his followers there. He became a master of his trade and managed to reach the door in his meditation pseudo-reality. He found the secret for timelessness. His body stopped aging.

To this day, Baulron continues training the few disciples that show up from time to time to learn from him. Any new disciples that come must first spend a decade as an acolyte before they are permitted any kind of martial training. If new disciples wish to skip this phase, they must first show his prowess in combat. The person must first defeat a group of six aarakocra monks at the sanctuary steps. These aarakocra became Baulron’s disciples almost thirty years ago, they all came from the same flock and are Baulron’s favorite because of their dedication. Baulron may further test any disciples by fighting them himself in combat.

Any fight to impress Baulron and earn his respect is not to the death. Any and all participant in the encounter agree to not kill their opponents, the fights are strictly for martial demonstration.

Aarakocra Monks – Six level 3 aarakocra monks face the party at the sanctuary’s steps. They have the advantage because they can flay from ledge to ledge and make the best of their mobility.

The Master Himself – Baulron (Level 15 monk) faces the party accompanied by his two most advanced students (Level 5 monks).

These are the general features of the mountain sanctuary. It is located near the summit of a mountain in a temperate region. Finding your way is not difficult because there are steps from the base of the mountain to the sanctuary.

Terrain. The steps are in bad shape but still usable. Near the sanctuary, veering from the steps is dangerous because the path is surrounded by sheer drops to lower levels of the mountain. A creature that falls may go down 50-150 feet.

Smells and Sounds. The sound of the wind is prevalent in the higher parts of the mountain, near the sanctuary. The wind is strong enough that small-sized creatures will be considered to be in difficult terrain.