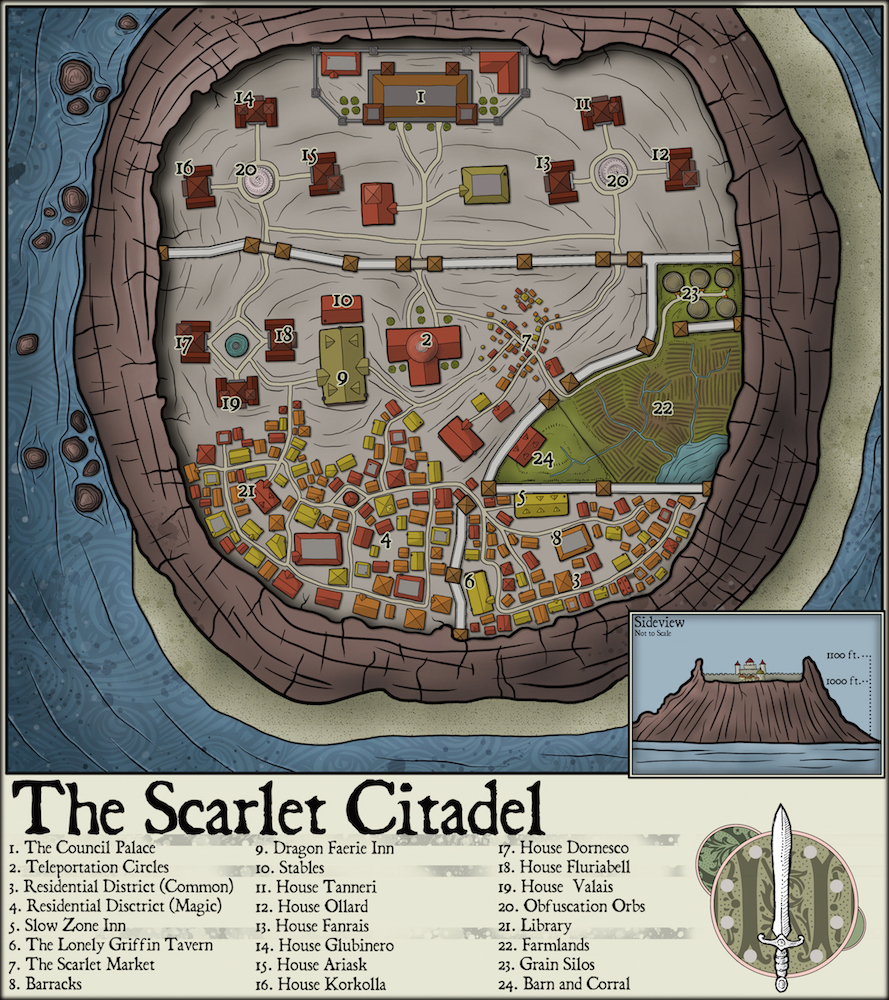 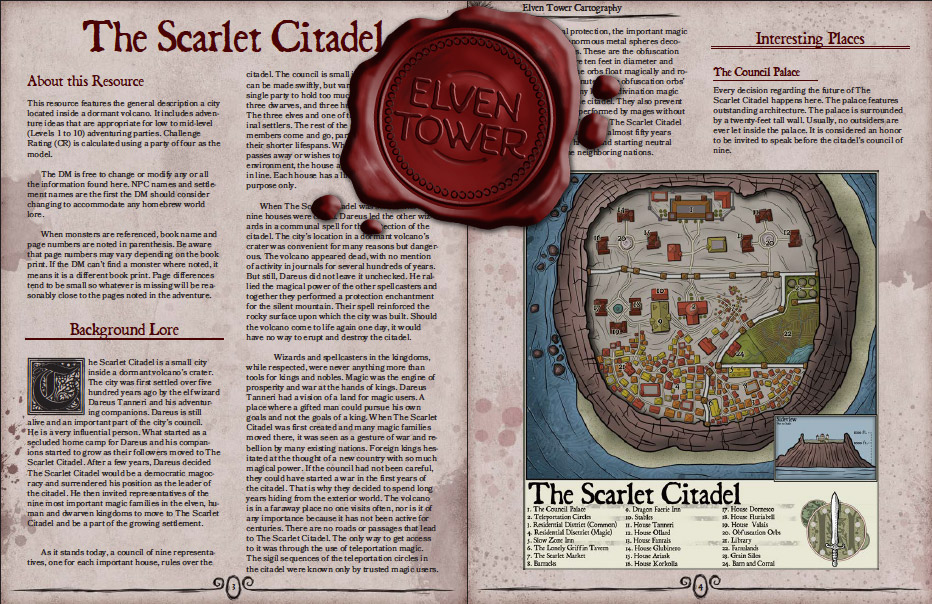 This resource features the general description a city located inside a dormant volcano. It includes adventure ideas that are appropriate for low to mid-level (Levels 1 to 10) adventuring parties. Challenge Rating (CR) is calculated using a party of four as the model.

The Scarlet Citadel is a small city inside a dormant volcano’s crater. The city was first settled over five hundred years ago by the elf wizard Dareus Tanneri and his adventuring companions. Dareus is still alive and an important part of the city’s council. He is a very influential person. What started as a secluded home camp for Dareus and his companions started to grow as their followers moved to The Scarlet Citadel. After a few years, Dareus decided The Scarlet Citadel would be a democratic magocracy and surrendered his position as the leader of the citadel. He then invited representatives of the nine most important magic families in the elven, human and dwarven kingdoms to move to The Scarlet Citadel and be a part of the growing settlement.

As it stands today, a council of nine representatives, one for each important house, rules over the citadel. The council is small in size so that decisions can be made swiftly, but varied enough to avoid a single party to hold too much power. Three elves, three dwarves, and three humans form this council. The three elves and one of the dwarves are the original settlers. The rest of the council has seen many members come and go, particularly humans, due to their shorter lifespans. Whenever a council member passes away or wishes to retire from the political environment, the house appoints the next person in line. Each house has a line of succession for this purpose only.

When The Scarlet Citadel was settled and the nine houses were called. Dareus led the other wizards in a communal spell for the protection of the citadel. The city’s location in a dormant volcano’s crater was convenient for many reasons but dangerous. The volcano appeared dead, with no mention of activity in journals for several hundreds of years. But still, Dareus did not leave it unchecked. He rallied the magical power of the other spellcasters and together they performed a protection enchantment for the silent mountain. Their spell reinforced the rocky surface upon which the city was built. Should the volcano come to life again one day, it would have no way to erupt and destroy the citadel.

Wizards and spellcasters in the kingdoms, while respected, were never anything more than tools for kings and nobles. Magic was the engine of prosperity and war at the hands of kings. Dareus Tanneri had a vision of a land for magic users. A place where a gifted man could pursue his own goals and not the goals of a king. When The Scarlet Citadel was first created and many magic families moved there, it was seen as a gesture of war and rebellion by many existing nations. Foreign kings hesitated at the thought of a new country with so much magical power. If the council had not been careful, they could have started a war in the first years of the citadel. That is why they decided to spend long years hiding from the exterior world. The volcano is in a faraway place no one visits often, nor is it of any importance because it has not been active for centuries. There are no roads or passages that lead to The Scarlet Citadel. The only way to get access to it was through the use of teleportation magic. The sigil sequences of the teleportation circles in the citadel were known only by trusted magic users.

As an additional protection, the important magic houses crafted two enormous metal spheres decorated with spiral inlays. These are the obfuscation orbs. The orbs measure ten feet in diameter and weight several tons. The orbs float magically and rotate eerily every few minutes. The obfuscation orbs’ function is to prevent any kind of divination magic to work from outside the citadel. They also prevent teleportation attempts performed by mages without the teleportation circle’s sigils. The Scarlet Citadel remained a faraway rumor for almost fifty years before coming out of hiding and starting neutral relationships with the neighboring nations.

Every decision regarding the future of The Scarlet Citadel happens here. The palace features outstanding architecture. The palace is surrounded by a twenty-feet tall wall. Usually, no outsiders are ever let inside the palace. It is considered an honor to be invited to speak before the citadel’s council of nine.

The building at the very center of the city is the only port of entry. It features three decorated teleportation circles inlaid on the floor. Given the fact that the three teleportation circles bypass the obfuscation orbs’ protection, anyone with the correct sigil sequence can potentially show up here. Because of this, the building is heavily guarded. Any unannounced visitors are interrogated and detained here before they are given access to the city. The building is protected by a group of mages (MM, p. 216), some foot soldiers and 4 stone golems (MM, p. 216).

This is the only entertainment business available to all people, regardless of their magical abilities. The owner and bartender is a middle-aged man named Rollard. He has lived in The Scarlet Citadel most of his life and can provide information, rumors, and even odd jobs for adventuring visitors.

The Dragon Faerie Inn is the second biggest structure in the city next to the Council Palace. It is located in the very center of the city, right next to the Teleportation Circles. It is an expensive place to spend the night in. The royal suites are often used by foreign dignitaries and visiting magical scholars that come to use the extensive libraries in the Council Palace. By policy, non-magic users are not allowed to enter as clients. But they are permitted entrance if they are part of an important mage’s retinue.

There are nine mansions spread along the north side of the city. The nine families agreed on building nine almost identical mansions as a gesture of equality. Even Dareus Tanneri had his mansion equal to the rest. Members of such families are considered the most important members of the citadel’s society. The magical houses take pride in allowing only the most prominent spellcasters to live in the citadel. At least half of the houses have fallen to frivolity and self-loving in the past century. It is not uncommon for the houses to host three day long parties that rival royal festivities in foreign kingdoms. Only the highest ranking in the city are invited to such celebrations.

The six mansions on the north side of the city, next to the Council Palace, are charged with taking care of the two obfuscation orbs. They are the main line of defense. Should they fall or become damaged, anyone would be able to instantly teleport into the citadel. Each orb is surrounded by 4 stone golems (MM, p. 216).

The west side of the city is separated from the citadel with a wall. Inside, there are grasslands, farms, a barn with cattle, a pond, and grain silos. Any farmer would know instantly that the land dedicated to farming is by no means enough to sustain the Citadel’s population. However, the land and crops here are magically enhanced. The farmers in charge of the farms are magic users. They speed up the harvests magically. Cattle also grow fatter and faster with the special food they are feed with. The Scarlet Citadel tries to import as minimum as possible to avoid dependency on foreign states, that is why they have developed advanced skills in magical agriculture over the centuries.