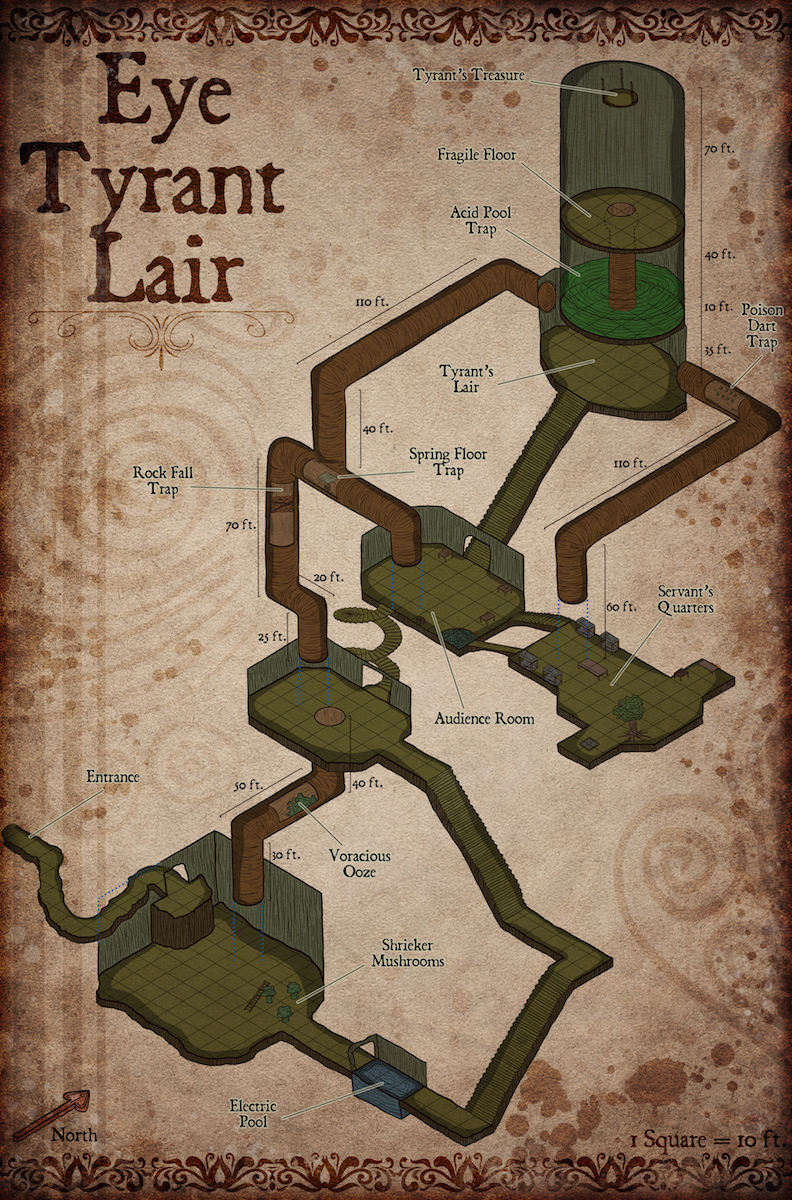 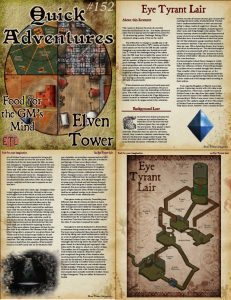 This resource features the story of a terrible beholder overlord and its lair. It includes adventure ideas that are appropriate for high-level (Levels 8 to 12) adventuring parties. Challenge Rating (CR) is calculated using a party of four as the model.

The multiverse of planes knows few creatures as cruel and hateful as beholders. Even the most learned scholars ignore the true origin of the eye tyrants. They appear to have spawned in most planes simultaneously. Beholders have no place to call home, instead, they transform whatever and whoever they find into the distorted image in their heads. The most atrocious ideas come together when trying to understand the nature of beholders. There are written records of human scholars gone insane after realizing the hard truths of beholderkind. The key fact to understand beholders is their unconscious ability to shape reality through their dreams. Beholders are extremely intelligent, surpassing most other races and living beings in the planes. Their brains’ anatomy shows incredible development and a level of electrical activity beyond comprehension. Beholders are a true workhorse of electrical potential. All this telekinetic energy manifests itself in the creature’s abilities. They use it to fly and power their eye rays. When beholders dream, their brains work at an accelerated pace. The electrical-magical potential runs untamed and with it comes the possibility of re-shaping reality. The demented twisted creations of beholders’ dreams are beyond explanation in written form.

An interesting fact about these changes to reality is that beholders themselves do not acknowledge their own influence in them. If something changes or an aberration is created through their dreams. They consider either it was always so, or the change came to be in order to please the beholder. Beholders are so egotistical they believe the world is their realm and it will change itself according to their wishes.

Years ago the Kingdom of Bluerth was a happy place. A growing country with rich culture and strong alliances. There was a small town named Golden Grass a few days from the capital. Golden Grass owed its name to the endless wheat fields surrounding it. While it was a poor town, it was important for the capital’s supply of food. The people of Golden Grass were humble and hardworking. They had a secret, however. Once a month the people of Golden Grass were expected to bring a gift to a cave two miles north to the eye tyrant. An evil beholder built its lair deep inside the hills, its name was Daargazno. Daargazno fancied himself the true ruler of the region. For years he threatened Golden Grass and a few other smaller settlements. Under threat of swift retribution, he commanded them to bring him riches and resources. Daargazno is so terrifying to the peasants that no one dared report the situation to the authorities. After all, as long as people complied with the beast’s requests no one was hurt.

It all took a bad turn a year ago. Daargazno slept in the highest level of his lair. He built a tall room with fragile floor under which an acid pool awaited for a brave warrior. Daargazno was paranoid about treasure hunters and intruders like most of his kind. In his paranoia, he expected intruders every day. Daargazno often stood motionless with its eyes pointing at the shafts that connected his audience room with the rest of his lair; waiting for attackers that never came. One day he fell asleep during such vigils, his paranoid thoughts exploring every possible different scenario under which he could be attacked in his lair. He had placed many traps and many charmed servants as deterrents but his powerful mind ran at full throttle exploring the variations. They were infinite. Daargazno felt fear for the first time in its existence. Not because of the odds of not being able to prepare for any given threat, but for the lack of time he had to get ready for all and every possibility. Beholders were long-lived but not immortal. The only solution to such quandary was to remove death from the equation. What would it mean to not die? Could it be so far-fetched to fathom a beholder as an endless representation of life? Beholders were, after all, the pinnacle of evolution and biology. At least according to them.

Daargazno kept dreaming. It was one of those episodes of reality-shaping dreams. It imagined itself in future far away from what would be its regular lifespan. Almost a millennium into the future. Daargazno was a ruler of a great expanse of land very different from the northern hills where his lair currently was. Its body had changed after so many years; Its flesh and soft tissues decayed and rotted. Only the great cranium and mandible remained. His eyes and eye stalks were gone, red spots of light replaced them. While Daargazno saw itself as an undead vestige, in the dream he felt more powerful. A true undead tyrant.

Daargazno woke up violently. Something was different. Just like his dream, his flesh and eyes had disappeared. A person would have had a crisis after seeing such cruel reality but Daargazno felt satisfied. The dream of grandeur was nothing but a signal, a trigger for a new era. Its presence in the northern hills of Bluerth had finally come to an end, he had been lazy for a long time. But now Daargazno was free. Free from time and from life’s expiration date. It was time to expand his realm.

Daargazno’s new undead powers allowed him to transform living creatures into undead servants. Far more loyal and useful than charmed thralls. He started by taking over small settlements to build up an army of undead bodies to attack Golden Grass. He attacked Golden Grass a few days ago. The first onslaught did not bring down the small town. Daargazno found it entertaining and regrouped a few miles north. He plans to attack in a matter of days.

The sudden rise of Daargazno, the Eye Tyrant, took everyone by surprise. Bluerth’s capital just recognized the gravity of the situation after receiving reports of the three small settlements overrun by the undead. A detachment of the main forces is on its way to Golden Grass to protect it. The royal family has also put out a sizable bounty for the beholder. While the reward is the highest in recent memory, only a few bounty hunters and mercenaries have actually traveled to Golden Grass to fight Daargazno. They are either the bravest or foolish.

Daargazno is a Death Tyrant (Monster Manual, page 29). Beholders are highly intelligent and logical creatures. They are also cruel, calculating and self-preserving. A foe like Daargazno will only fight when the encounter plays to its advantage. Daargazno is CR 13 (or CR 15 if encountered in its lair), as such, this enemy is appropriate for high-level parties.

Good adventure design for an implacable enemy such as a beholder demands a long arc of development. A single face to face fight only undermines the true potential of such a foe. The final battle with Daargazno should take place in its lair in the uppermost level. The room has a fragile floor and an acid pool underneath. When alive, Daargazno had a crew of charmed Quaggoths (Monster Manual, page 256), they still serve him but they are now undead. Daargazno recently created three Flame Skulls (Monster Manual, page 134) from the bodies of three wizards who dared oppose him during his first attack on Golden Grass.

It is up to the DM to craft memorable battles against Daargazno’s army before actually exploring its lair. Daargazno will attack Golden Grass and that is the perfect opportunity to get the adventurers involved in this quest. If the defense of Golden Grass fails. The adventurers and any remaining soldiers and mercenaries can retreat to the capital of Bluerth to rethink their strategy. If they do not act fast, Daargazno’s undead army will eventually attack the capital itself.