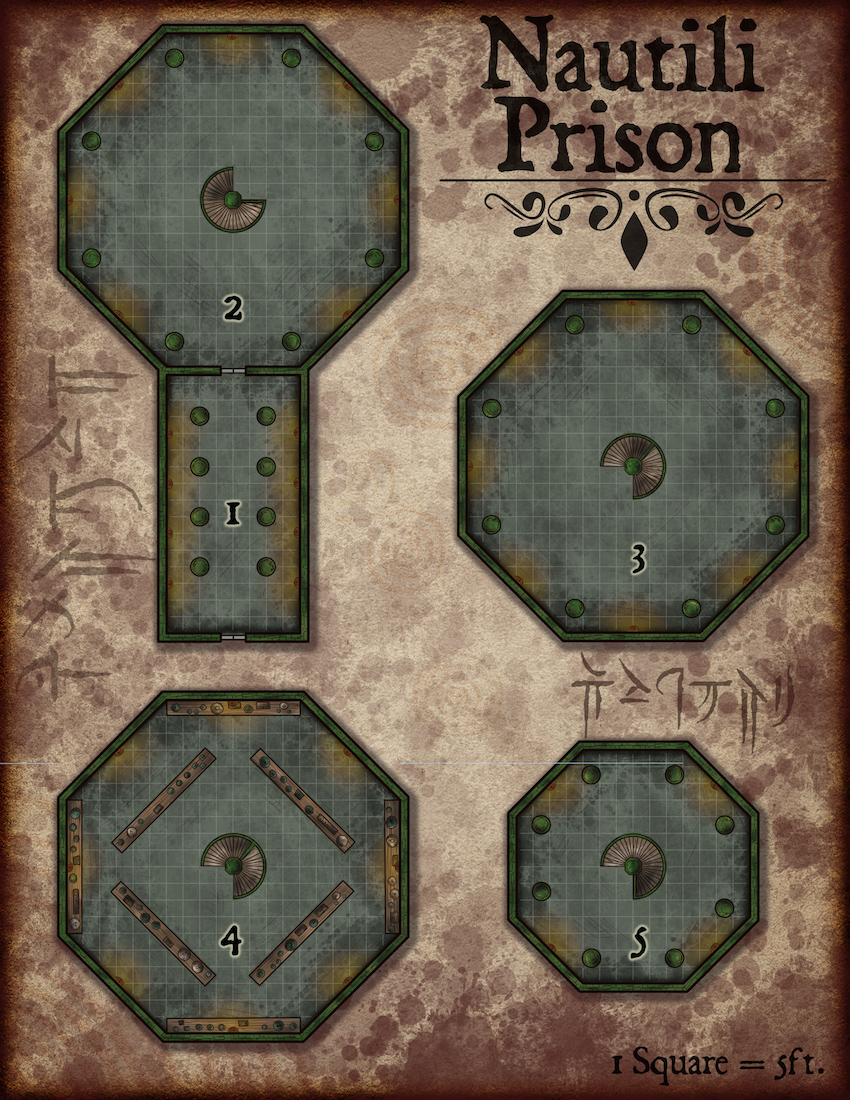 You can download the PDF release of this adventure for FREE thanks to my amazing supporters on Patreon. 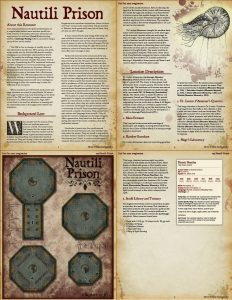 This resource features the general description of a mage’s tower where some sentient nautili are held, prisoner. It includes adventure ideas that are appropriate for mid-level (Level 8) adventuring parties. Challenge Rating (CR) is calculated using a party of four as the model.

When people see the oceans. They often see endless water and sources of food. The smart ones feel respect for the ocean and its dangers. Very few realize how far down it goes and what wonders it hides. Land-dwelling races think their world is all there is. They are wrong. Under the waves, there is more land than on the surface. There are more kingdoms and countless civilizations. Some of them even have contact with coastal cities. Tritons and other fishmen trade goods with men, but to them, they are just an afterthought.

A man named Fardio saw things differently. He was a student of nature, one with the animals, a protector of flowers and vermin. Nature had given him the power to take on the form of beasts. He felt more comfortable spending the night with a pack of wolves or a sleuth of bears than in the company of men. Men were strange to him.

Fardio felt interested in the creatures of the sea. He could take the form of a sturgeon and roam the seas. Fardio grew old. He spent his life and energy in the company of fish, wolves, birds and other creatures. He felt his body failing on him. He did not fear death, the food chain and the cycle of life were his sisters, he welcomed them with open arms. He wanted to leave something behind, however. He never had children; regardless of his animal shape, he could not have offspring with other animals either. Fardio crafted a spell that would imbue creatures with a semblance of life and consciousness. He chose to give this gift to a colony of nautili. The crustaceans found themselves grateful to him. It was the first feeling they experienced in their lives. Fardio spent the rest of his life swimming with the nautili.

The nautili are a type of crustacean that lives in deep water. In regular circumstances they do not gather in communities or share any kind of experience with each other, they are rather simple-minded sea creatures. Fardio gave the gift of sentience to a community of nautili, they immediately gathered and formed a closed community. They created their own culture and language from scratch. They all speak the common language too through telepathy. After a generation, they found out that their offspring also shared the same condition, thus their civilization started.

Hundreds of years later the nautili spread across the sea and became one more sentient species under the waves. They are small in size and do not have limbs or hands to create things. They build their homes and “cities” in reefs and submerged canyons. Even some other ocean species are unaware of the nautili sentience. Even to this day, the legend of the human druid creator still lives among the nautili through oral tradition. It is this belief in a human creator that spelled danger for them. An evil wizard, Dr. Lucien d’Amaraan bought a sentient nautilus specimen from a fisherman. The nautilus creature spoke a few words telepathically to Dr. Lucien and he was amazed.

Dr. Lucien d’Amaraan brought the nautilus back to his tower and experimented with it. He interrogated the innocent creature with pain and magic to learn its origin. Once he knew there was a whole world of sentient nautili he decided to study them. He laid traps for them and captured twenty-five specimens. He plans on dissecting them and trying chemicals on them just for amusement. One such prisoner is Durg’blub’adin. The senior nautilus is an accomplished telepath. With some clever mind trick, Durg’blub’adin managed to create a telepathic cry for help that isolated Dr. Lucien’s mind from hearing it. Hopefully, a brave person will hear it and come in time to rescue the poor nautili.

Dr. Lucien d’Amaraan (Archmage, Monster Manual p. 343) built his tower near the sea, on top of a great cliff. The tower is deep green, built greenstone from a nearby quarry. The tower is four stories high. The windows on all stories are narrow slits; only small-sized creatures can pass through with a successful DC 14 Dexterity (Acrobatics) check. The whole tower is under the effects of a permanent Guards and Wards spell. The special effect is a Gust of Wind spell-like effect in Area 1 originating from the north door to Area 2. All flights of stairs in the tower are covered in spider webs, and the rooms with fog, as per the description of the Guards and Wards spell. The DC for the spell is 11 + half the Average Party Level (APL).

This long hall is decorated with paintings of landscapes and knights. A strong wind comes from the far door (Gust of Wind effect) It is strong enough to push a man back.

This large chamber is home to Dr. Lucien. Furniture is arranged near the walls: a few cabinets, a bed, a table and two chairs, and two bookcases. The party will encounter Dr. Lucien here. He will be well aware of their presence and attack them on sight. Dr. Lucien possesses a slaadi control gem, it controls a Death Slaad (Monster Manual p. 278) who follows him as his bodyguard. There are 4 Ghouls (Monster Manual p. 148) in this chamber too. If the battle goes south for Dr. Lucien he leaves his lackeys to fight while he climbs to the laboratory to regroup.

This large chamber features eight long table-cabinets full of flasks and wooden boxes. Most flasks are filled with green or blue liquids; some of them contain the remains of some creature or a part of it, floating lifeless. Some of the flasks in the cabinets are where the nautili are imprisoned. Only Durg’blub’adin (Psionic Nautilus), the nautilus can help the party with a few spells. When the adventurers reach this chamber, if Dr. Lucien managed to escape, he will have summoned two Earth Elementals (Monster Manual p. 124) to guard him. If Dr. Lucien starts to lose this second fight he will attempt to flee with a teleportation spell.

The highest level of the tower is somewhat smaller in size than the rest of the tower. This chamber is filled with archives with past research, spell scrolls and Dr. Lucien’s notes. Dr. Lucien’s spellbook is here, it holds all the spells noted in the Archmage stat-block. Other treasure found here:

You can download the PDF release of this adventure for FREE thanks to my amazing supporters on Patreon.