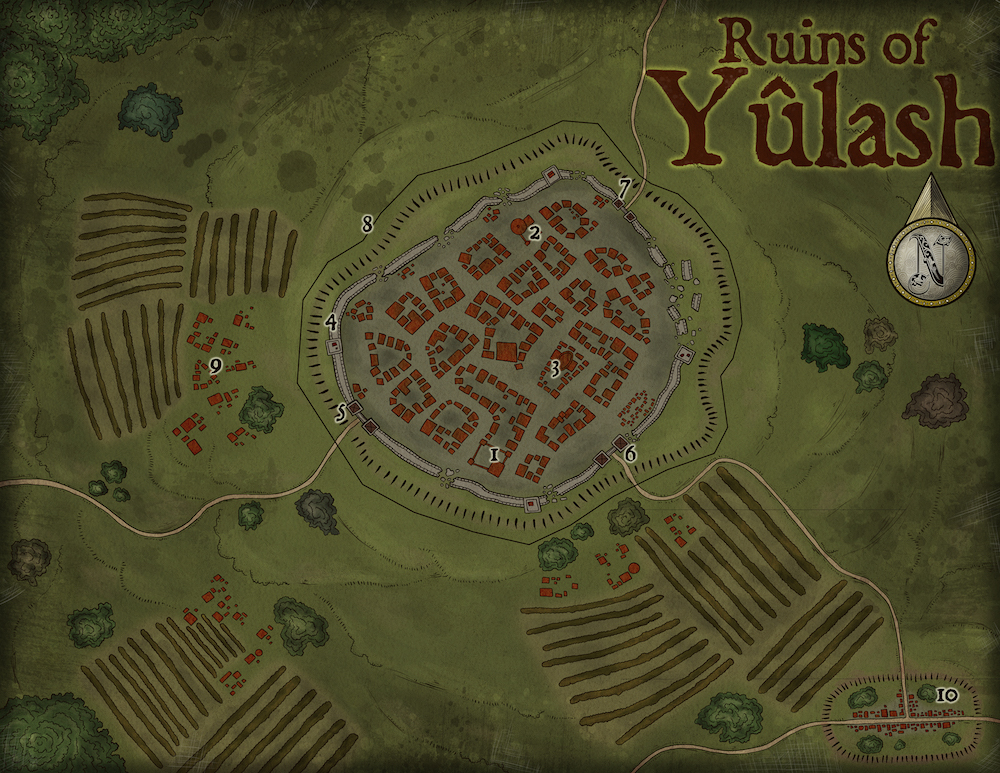 This resource features a general description of a ruined fort town, it includes adventure ideas that are appropriate for mid-level (levels 5-9) adventuring parties. Challenge rating is calculated using a party of four as the model.

Feel free to change or modify any or all the information found here. NPC names and settlement names are the first you should consider changing to accommodate your homebrew world. To modify the challenge rating of the adventure, you must first consider the power level of your party. Taking into account PCs’ individual levels and number of players is crucial to presenting a good challenge. Not all parties are the same, different playing styles and command of the system in your party can increase or decrease their effectiveness in encounters. You may adjust the encounters slightly by adding or subtracting monsters. Alternatively, controlling monsters with more intelligence and strategy is often the easiest way to raise the difficulty of a particular encounter.

A long time ago, right on the border of two warring nations, Yûlash was built. They built the fort-town on top of a hill that oversees the surrounding miles of land. Its strategic location was key to the defense of the border. The walls were thirty feet high, built from local grey granite. Three fortified gates served as the only entrances to the settlement within. In times of conflict scores of crossbowmen and bowmen defended the walls from the tall watchtowers.

War in the region was savage. Batallions would crash often and Yûlash seldom saw a siege. Its position was so prized that reckless military commanders tried anything to take the fort, and they did often. Yûlash was stormed and taken many times by both sides, often changing hands. The two nation’s banners had flown high on the battlements many times for years. It all ended one summer day when the commander in charge of Yûlash tried the unspeakable to defend the fort. Weeks before the attack, the commander accepted a wizard among their ranks. The wizard insisted he could help them win the war with the power of other dimension’s armies. The wizard meant to open a rift to the abyss and unleash demonic entities against their enemies. The plan was risky and desperate; the commander hated the idea of losing the fort once more, so he accepted the wizard’s offer.

On the appointed day, with armies storming Yûlash’s walls, the wizard performed the foul ritual and ripped the fabric of the planes. A gash opened up in the air, reddish light and black smoke erupted like lava coming raining down a volcano; terrible shapes emerged from the portal, demons. A great horned demon stepped in front of the wizard, all other demons awaited for a timeless moment to see what the horned king would do. The wizard was ready, he uttered a command in the abyssal tongue; the words were more than that, they were part of a binding ritual, an incantation to control the will of the horned king. The great demon stood still for a minute, the only sounds were the air cracking from the opened ritual and the far sounds of swords clashing and people dying at the walls. The demon smiled, stepped back and jumped into the air, opening its wings. All the other demons followed their leader, some of them could fly, the others could only run. The stampede of demons hit the walls with the strength of the tide. The commander and his soldiers cheered in awe and relief seeing the demons attacking their foes. Enemy soldiers had no real means to fight the extraplanar threat, their swords did not harm them. And when they did, the demons would reform on sight. Soldiers broke ranks and fled for their lives. Victory achieved, but a short one.

The horned king returned to the wizard’s side and awaited further orders. The wizard was drunk with power, he achieved the unachievable. He then ordered the horned demon to follow the stragglers and kill them. The horned demon smiled once more before grabbing the wizard by the waist and tearing him apart with a swift move. It had all been a ruse, the arrogant wizard did not hold the power to bind a real demon. The demonic forces then turned on the current holders of Yûlash, it was a bloodbath.

Yûlash’s glorious days were over then. The unleashed demons decimated both warring countries in the months to come. War came to a stop and almost became a joint effort to control the abyssal threat. The number of demons decreased over time, the portal was short lived, closing further each day, but not closing at all. Demons and other terrible creatures still roam the land.

The walls were destroyed in several locations and no construction is possible with the current situation. A wooden wall was built all around the hill, it is meant to keep things inside rather than outside. Small settlements exist now outside Yûlash, farmers, herders and soldier garrisons ready to confront whatever monster comes out of the fort. It is not common knowledge what caused the demons to appear in Yûlash, the only evidence of the events is still awaiting discovery inside, in the commander’s ledger and the wizard’s diaries.

While the party is traveling a well maintained road. They encounter an upturned cart and two dead horses. There are clear signs of a struggle and a dead human body, the only wound is a deep hole in his belly; the body appears to have been drained of all its blood. If the party tracks the attackers they come close to a ruined town fort on top of a hill. A group of monsters walks towards the fort with four humans captives. 4 Dretches, and 3 Chasme Demons (both MM p. 57)

Commander Adalsh Hubbor recently sent a group of fifteen soldiers on patrol inside the fort. The scouts are missing and the commander is preparing a rescue mission. If the party is around, the commander will offer a sum of gold in exchange of helping the soldiers escape. He suspects the location were the demons might have them. If the party accepts they will have to face 10 Manes (MM p. 60), 1 Hezrou (MM p. 60) and two Shadow Demons (MM p. 64).

Commander Adalsh Hubbor recently discovered the location of the still open portal. If it were closed, the fort could be eventually cleaned out. A cleric is with him, Father Dorannil; he claims to be able to close the portal with a divine ritual. Commander Adalsh will hire the party to escort the cleric to the very center of Yûlash, were the portal is. A strong opposition of demons will defend the portal from closure. 1 Yochlol (MM p. 60), 4 Quasits (MM p. 63), 25 Manes (MM p. 60) and 2 Hezrous (MM p. 65) stand guard. 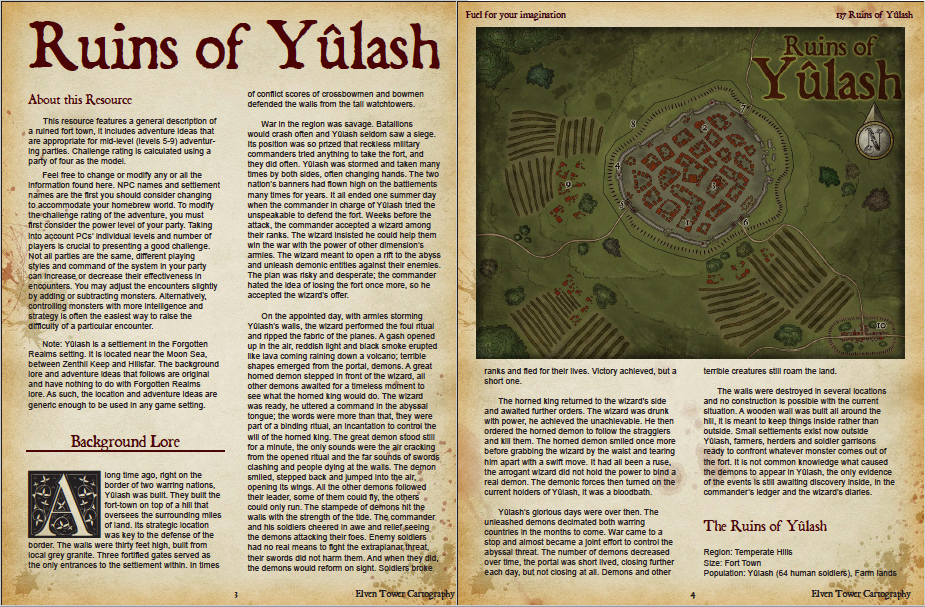